Home / Technology / Motorcycle airbags, the key to ensuring your safety

Every day, more and more bikers are using equipment with airbag technology, and the number of brands working to develop this interesting system continues to grow. Ranging from systems that are incorporated into the leather race suit, jackets, or vests, there are constantly new ideas on the market.

The first airbag systems were pricey and were developed to be used exclusively on the circuit, but they have slowly evolved and become simpler and thus more suitable to be used in everyday settings. And they're now affordable enough, so you don't have to dish out an insane amount of money on them.

That's why motorcycle airbags are being discussed a lot more these days, and although we've still got a ways to go before this technology is commonplace, many institutions are working to promote its use. 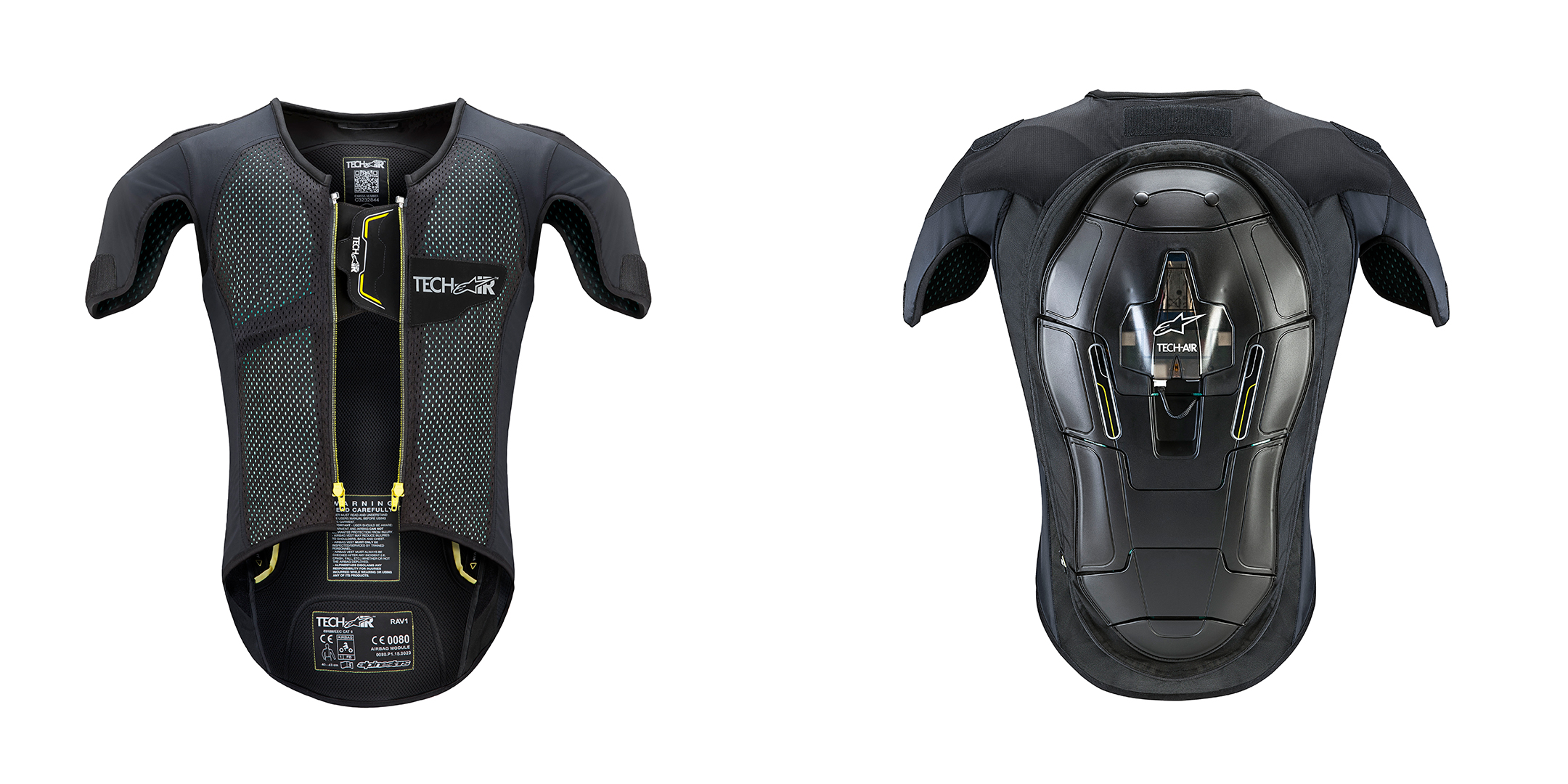 In fact, at the Road Safety Commission that took place in the Spanish Parliament this spring, the Ministry of the Interior reported that it was studying the possibility of legally requiring the use of motorcycle airbags. However, ANESDOR (the Spanish National Association of Businesses in the Two-Wheeled Motor Vehicle Sector) noted that, even if it doesn't become required, the Association would be interested in promoting airbags for motorcycles.

Additionally, the platform VIVE LA MOTO, monitored by ANESDOR and created in collaboration with distinct organizations like DGT, DORNA, and RACE, recently launched the #PonteUnAirbag (#WearAnAirbag) campaign to promote airbag use with a video including some MotoGP riders recommending the airbag off the circuits. 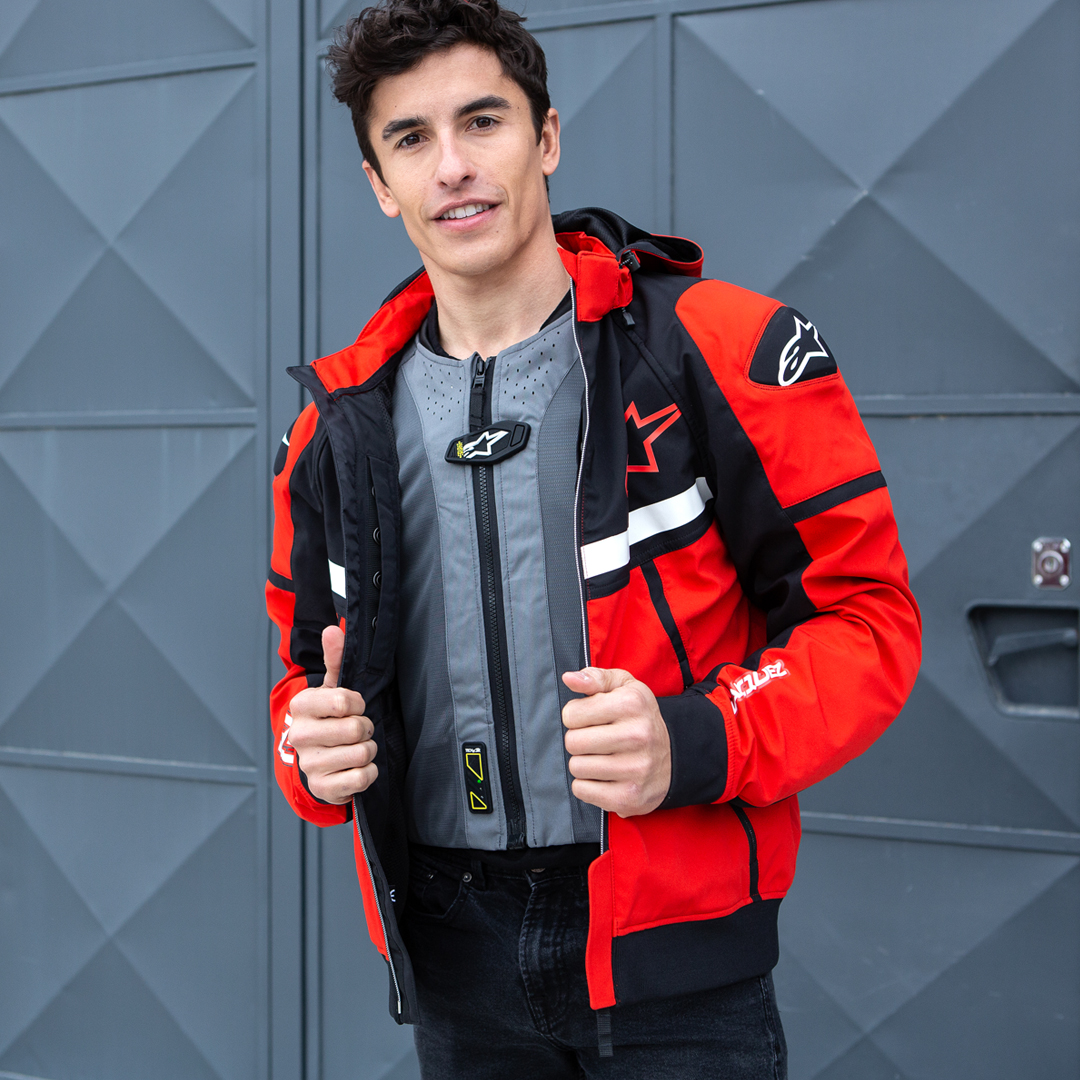 How does an airbag work?

Although one version of the Honda GL1800 Gold Wing series was equipped with an airbag system and some helmets also have a small airbag to protect the user's neck, when we talk about airbags for bikers, we refer to a "bag" in the shape of a vest that inflates in the event of a fall or accident and mainly protects the neck, shoulders, chest, and back. This technology has been evolving for the past several decades in MotoGP, and nowadays riders in the three categories must use it. 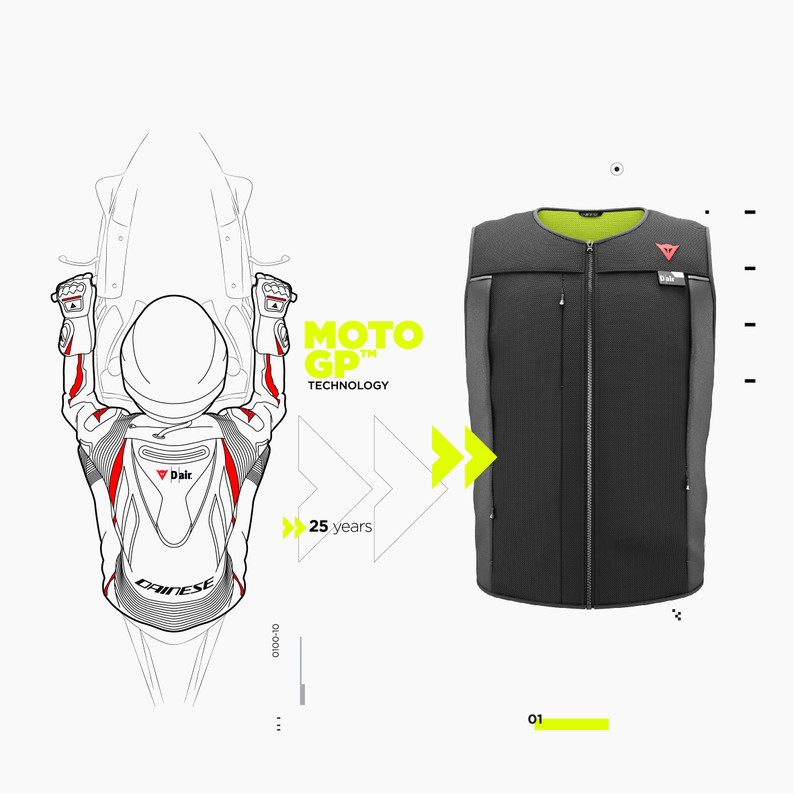 Obviously, this type of airbag is not the final interpretation of the element and its range of protection depends a lot on the type of fall and the speed at which it occurs. However, it has been proven to reduce up to 90% of the force received in an impact. That's a huge reduction that could prevent many injuries and also save lives. According to data provided during the #PonteUnAirbag campaign presentation, blunt force chest injuries make up 35% of all motorcycle accident deaths, in which case the rate of protection from an airbag could be comparable to that of a helmet in an accident.

In addition to the bag that inflates, a device of this type also generally includes a GPS system, accelerometer, and gyroscope as well as a battery and the inflation mechanism, which may have one or two bottles of compressed air. The activation system can be mechanical or electronic. The former is attached to the motorcycle with a strap and activates when separated. The latter is an independent system that has a series of sensors that detect sudden changes to the rider's position. Both activate a striker that perforates the bottle of compressed air and completely fills the bag in 25 milliseconds (0.025 seconds). Then, in the event of impact, the force produced is distributed throughout the vest, thus reducing the possibility of suffering an injury. For example, Dainese, a pioneering firm that has worked for more than 25 years in this field, reports that the protection provided to the back by their Smart Jacket is equivalent to seven back protectors worn together. 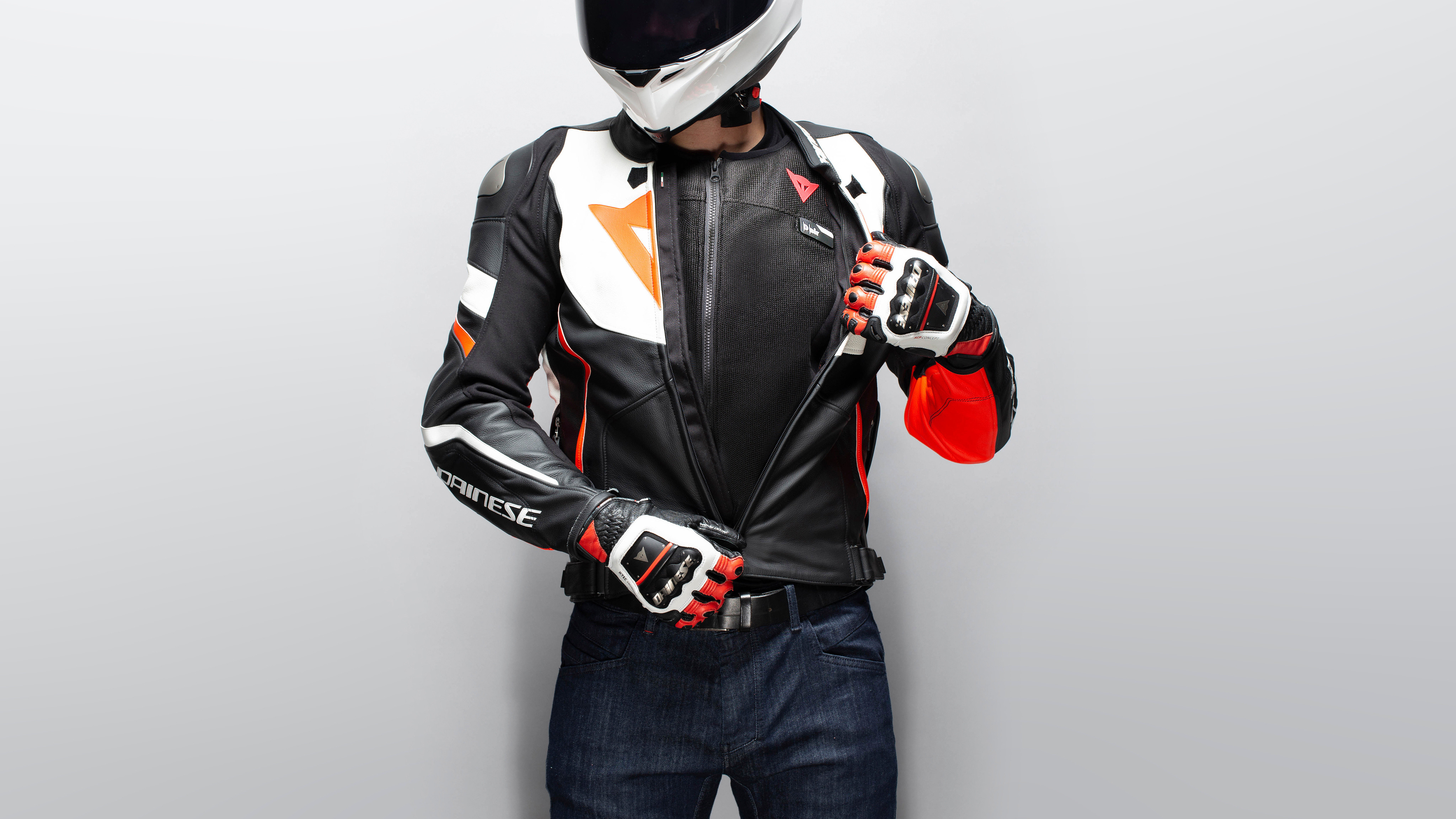 Once the airbag has been inflated in an accident, it automatically loses pressure after a few seconds. Once that happens, you'd need to send it to the manufacturer to replace the bag and air bottle, in addition to repairing any possible damage.

How much does an airbag cost?

When it comes to the price of a motorcycle airbag, that depends a lot on the type and the brand. In general, vests, which can be worn either under or on top of a jacket, range between 400 and 600 euros. If you prefer to go for a leather jacket or race suit, you'll need to tack on the usual price of those items. A leather or Cordura jacket (with an airbag) could cost anywhere between 1,500 and 2,000 euros. If you want to try a race suit with an airbag, it could be an additional 1,000 euros if it has the most sophisticated technology. So, a good race suit with an airbag could set you back 3,000 euros. 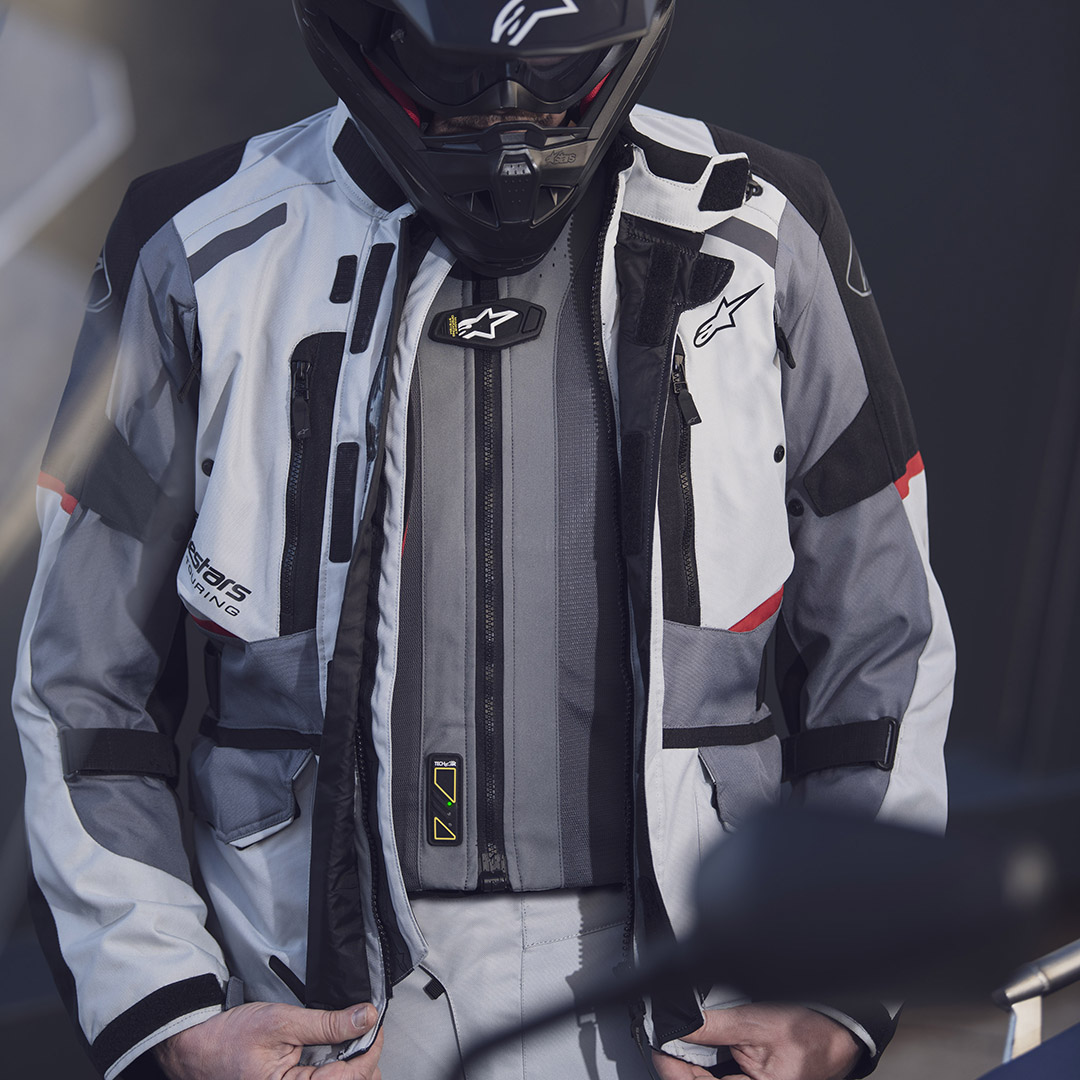