Home / MotoGP / What do Marc Márquez and Pol Espargaró do over the winter?

When the competition calendars weren't as intense as they are today, winter meant a few months of vacation for riders. They could disconnect and relax. It was a long period away from their motorcycles, where they looked for a well-deserved rest and took the opportunity to disconnect from the competition and recharge their batteries in far-flung locations, or simply get away from the stress of racing, which prevents them from leading a normal life.

That is now a thing of the past, part of the prehistory of motorcycling we could say, because although it is true there is no track time in December and January: no competitions, no training sessions, or races of any kind as they are prohibited due to MotoGP regulations, riders cannot rest on their laurels or neglect their physical condition. Some take advantage of December to take a little vacation, the real kind, and not worry about schedules, or meals, or training.

Although, given the top physical condition MotoGP riders are currently in, even during these moments of rest, few decide not to carry on exercising, not quite at the same intensity as their usual preparation, but they try to stay on top of things.

There are those who, come winter, still have a tight schedule, for various reasons. For example, the season champions have commitments that run over into December, due to sponsors or the media, and that forces them to give up some of their days off. Riders' schedules are not as flexible as they used to be when ceremonies, celebrations, and galas could get in the way of physical preparation.

Something very different happens when this time for rest has be spent at the hands of doctors, which happens quite often. With such a long season—last year there were 18 races, and in 2022 there will be 20—it’s rare for a driver to not get injured, no matter how minor, and they sometimes end up carrying this injury throughout the championship until, come December, they can finally get a doctor to sort it out. Others, who have had to undergo surgery during the season, take advantage of this time to get plates and casts, put in place to fix fractures, removed. In general, they are not overly complex surgeries, but they do end up on the operating table, and this implies a lot of recovery time.

A recent example is Marc Márquez, who spent the last few winters busy recovering due to various injuries. Since the winter of 2018, Márquez has been undergoing medical treatment. First to fix a chronic shoulder problem, with was a total success, as he then went on to win the MotoGP title. And then, a serious injury to his right humerus in Jerez in 2020 forced him out with a long recovery. Currently, Márquez is recovering well from an episode of diplopia after suffering a fall in training. These are prices that sometimes have to be paid, but as we saw in 2012, when Márquez suffered a similar problem, that period of rest allowed him to get ready and be fully fit for the start of the championship. 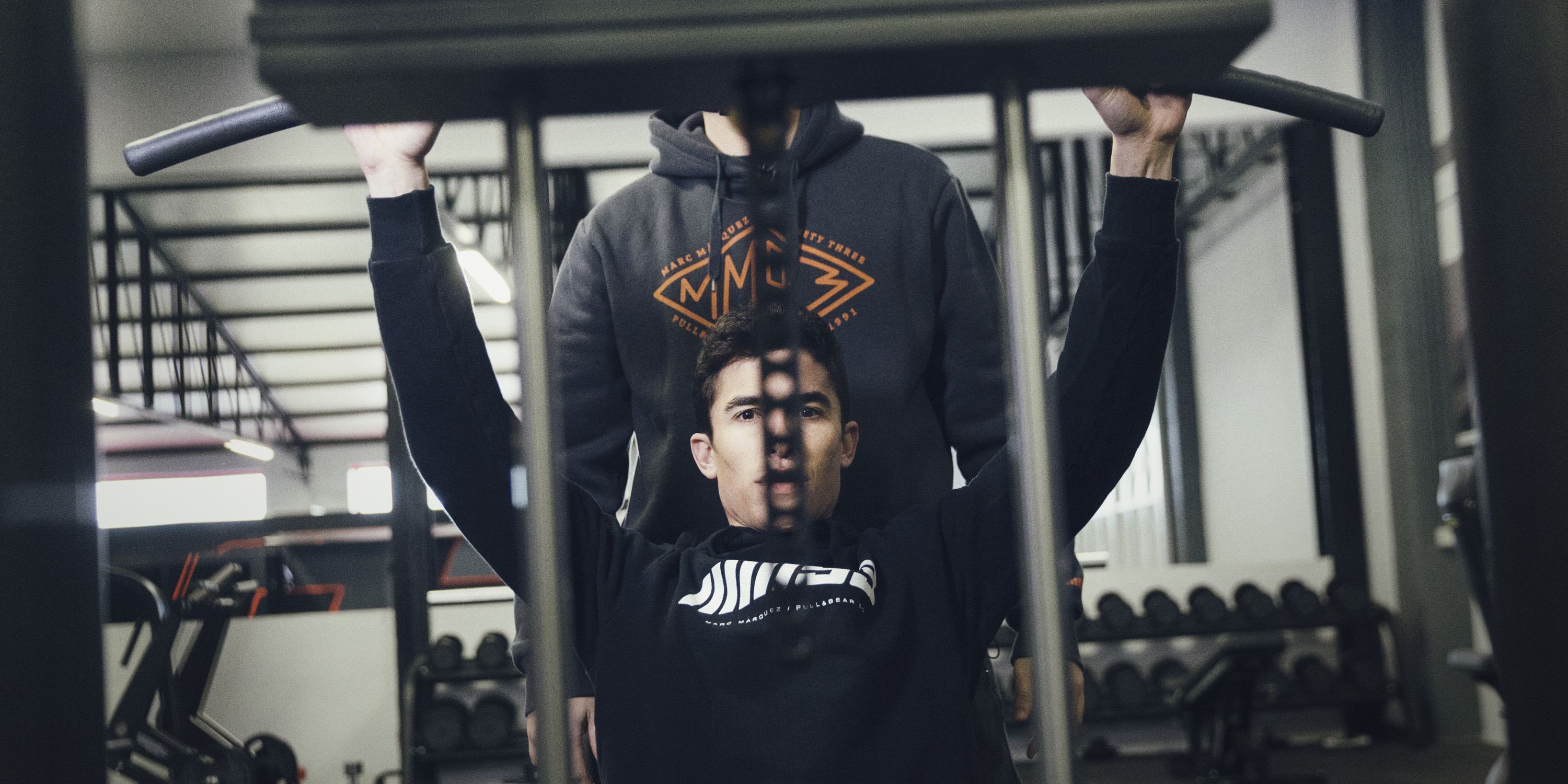 December is generally a quiet month, but in January things start to pick up again. Lately, physical preparation is more important than ever, because riders face a ten-month schedule. There are races from March to November, but also before and after the championship, the riders are go through some important training sessions that are essential for their performance over the course of the season.

Work intensifies at HRC in December and January

In the tests carried out in the weeks after the last Grand Prix of the season, in November, riders test the prototypes for the following campaign. Modifications and adjustments are made in order to improve the available equipment and make it more competitive. With all the information gathered during those intense days of testing, while the riders take a break before starting their physical preparation, the engineers, in December and January, get to work on developing the new bikes. 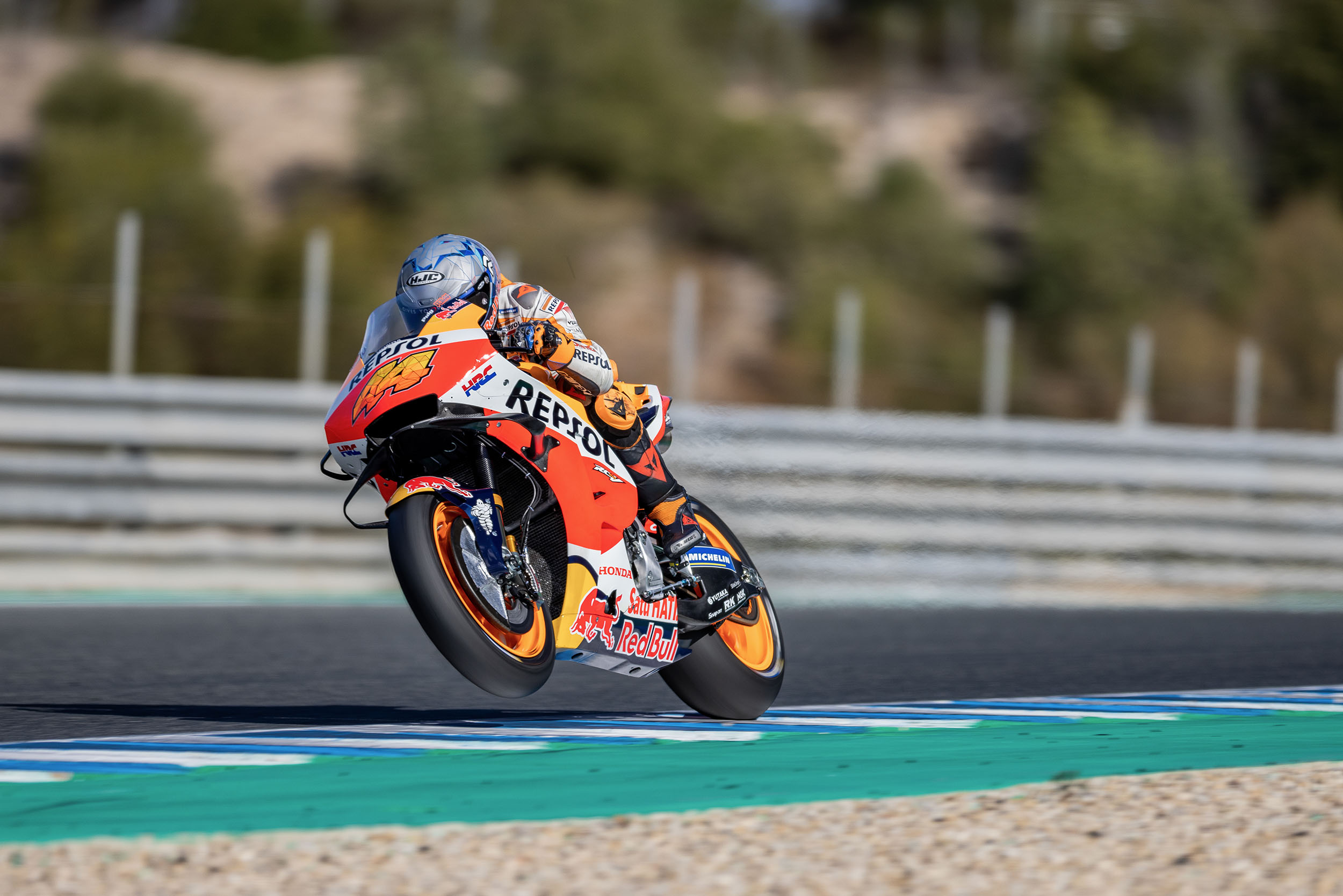 They usually start by improving on the previous year’s model. But it is also very common for bold engineers to make substantial changes that result in completely new bikes. And they don’t just do it on a whim, most of the time, it’s the riders who encourage them to make these radical changes. In general, the engineer is open-minded, willing to try new things, but there is technical manager mediating between the rider’s wishes and the new material available to the engineer. They are usually pragmatic and decisive, driven by the motto: ‘if ain’t broke, don’t fix it’.

The factory builds the new motorcycles in December and finishes them off in January. At the end of the month, before the riders test the bikes again in February, they are put through their paces by the test riders . They are in charge of making sure that everything is in order, that the bikes work properly, and there are no problems.

Before the first tests, while the riders get training, the team technicians also go to the factories to learn about the new motorcycles and do what is called “schooling”, which is nothing more than a technical course in which factory engineers teach them all the new features and learn how to assemble and disassemble the new motorcycles. They are all seasoned technicians, but these sessions are a must to familiarize themselves with the new material.

By January, riders have done everything they can to get themselves in  top physical condition. The season is long, and demands are higher than ever on an athlete's physical condition, which is achieved with intense and varied training. A lot of work is done to gain physical strength, and it is common to do cross-country skiing and cycling—the truth is that many riders never get off their bike in the whole year—as well as a lot of work in the gym.

Each rider has a physical trainer who creates a specific plan for them according to their characteristics and needs. The old myth that riders in the old days never stepped foot inside a gym, isn’t entirely true. Their physical condition might not have been as impressive as it is today, as there is no other way to handle the high physical demands of a MotoGP bike, but the great champions of the 500s era also worked hard to tame those wild beasts . We would have to go back to before color TV to see a real difference in physique, but the competition was different back then. It was another world. 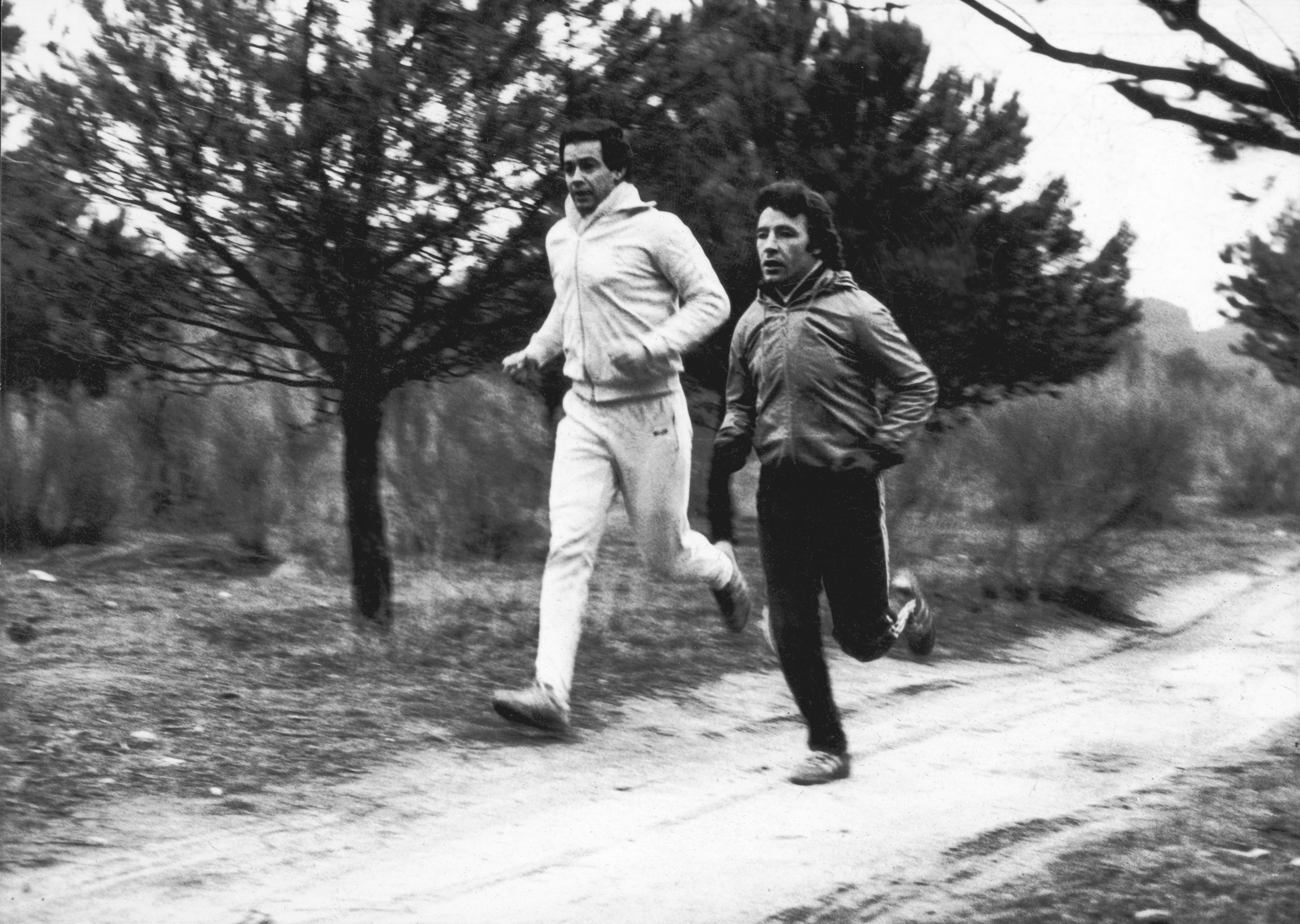 Of course, practice on the track cannot be neglected either. Although they cannot ride their racing bikes, all riders train with motocross or dirt track bikes, or a sports bike on the track, to not lose their touch and continue to improve skid control and different riding techniques. There is always a risk with motorcycle training, because of how Moto GP riders are wired, they can never go out for quiet ride. If not, they wouldn't be professional riders! Whether jumping or skidding, or at full speed in a MotoGP, the riders always give their all. They can spend many hours on the bike, and this can sometimes lead to expensive mistakes. Many riders  have been injured while training with motorcycles and they have ended up missing preseason tests, or having to do them while carrying an injury, and that can be a costly handicap. 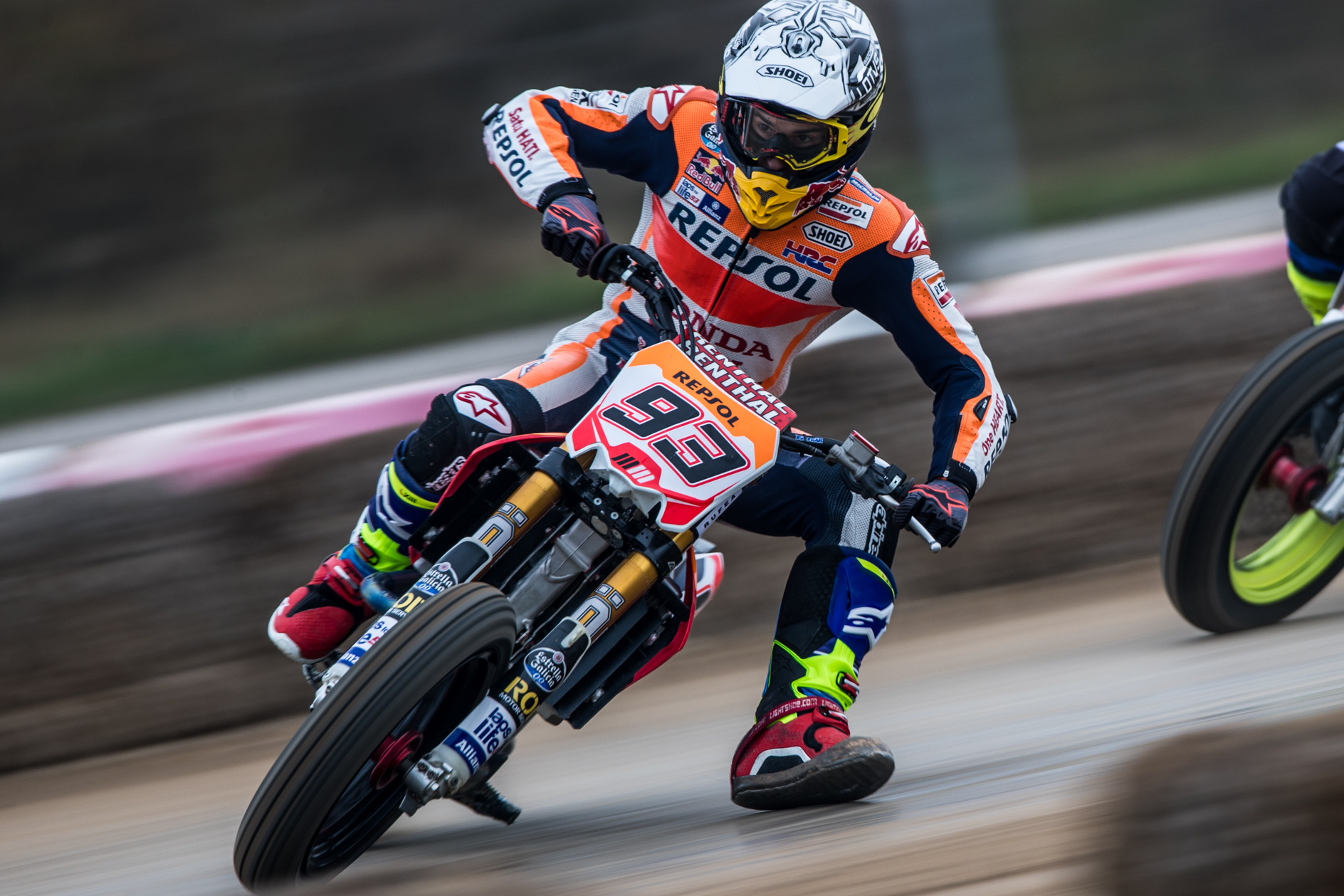 In the end, the success or failure of a rider does not depend exclusively on them. It is a combination of a good motorcycle, a good technical team, and a rider who knows how to respond to the demands of the competition. And, sometimes, in such a tightly fought competition as it is today, success depends more on what has been done over the winter than on what can be done during the season. If in they haven’t put in the hard work in December and January, it will be very difficult to make this up in during the intense competition schedule. This is why winter is so important.