Some time ago we told you about the NSR500, the bike ridden by the likes of Doohan and Crivillé. This motorbike saw its development cut short with the arrival of the MotoGP era — bikes with two-stroke engines were soon eclipsed by those with 4t engines, which held a distinct advantage following the change in regulations. Thus, the RC211V made its first stop in the Box of the Repsol Honda Team.

As was to be expected, the Japanese manufacturer started out this new era with a groundbreaking introduction: the first V5 engine in the history of the competition. This novel device had three cylinders in the front, two in the rear, and a 75.5-degree bank angle to eliminate the vibrations caused by this uneven distribution. The result was a narrow, easy-to-handle engine which, thanks to the team's prior experience with the "Big Bang" configuration, made this a balanced, high-powered machine with smooth handling.

Another of the enhancements introduced was a semi-dry sump crankcase, allowing the gearbox cavity to be used as an oil tank. This meant the motorcycle could be even more compact and prevented leaks that are so common in wet sump systems.

Its performance was unquestionable. In 2002, the year of the RC211V's debut, this bike won 14 of the 16 contests it competed in that season. 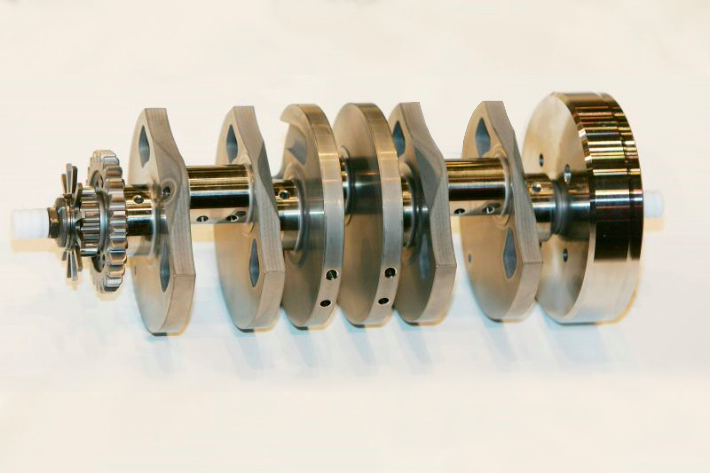 The following year brought all sorts of adaptations to the engine. Changes were made to the intake and exhaust, and an electronic throttle control system was added. The most significant change was the shortening and widening of the cylinders. Together, these two changes allowed an increase in revolutions and power.

The electronics continued to evolve and the development of engine braking was a giant step forward. The change to four-stroke engines meant that about 30 hp of brake power was being applied to the rear wheel when the rider let up on the throttle, putting grip at risk. Intake valve control proved effective in reducing the effect of engine braking on the bike.

All these changes were proven to be heading in the right direction, helping Repsol win the World Championship for a second consecutive year.

In 2004, the engineers continued developing the engine, taking it beyond the evolutions of previous years. The stroke length of the cylinders was shortened even further and their diameter was increased, enabling the engine to reach 15 000 rpm. Experimentation began with different ignition configurations with a 180° crankshaft, varying towards a pattern more similar to the Big Bang but without all pistons firing simultaneously.

In its pursuit to become a technological leader and tame its increased power, Honda introduced the HITCS system (Honda Intelligent Throttle Control System). This element sensed differences in speed between wheels and other parameters to adjust the intake butterflies depending on the situation, preventing wheel spin and wheelies and improving the response of engine braking. This was all thanks to an electro-mechanical system that acted on the intake butterflies according to the gear and the rider's instructions.

Although this machine took the constructor's title, there was still plenty of room for improvement and in 2005 work continued on the HITCS system, electrical improvements, and the frame. This model's power was increased by approximately 5% compared to its predecessor, but some time would still go by before they reaped the rewards. 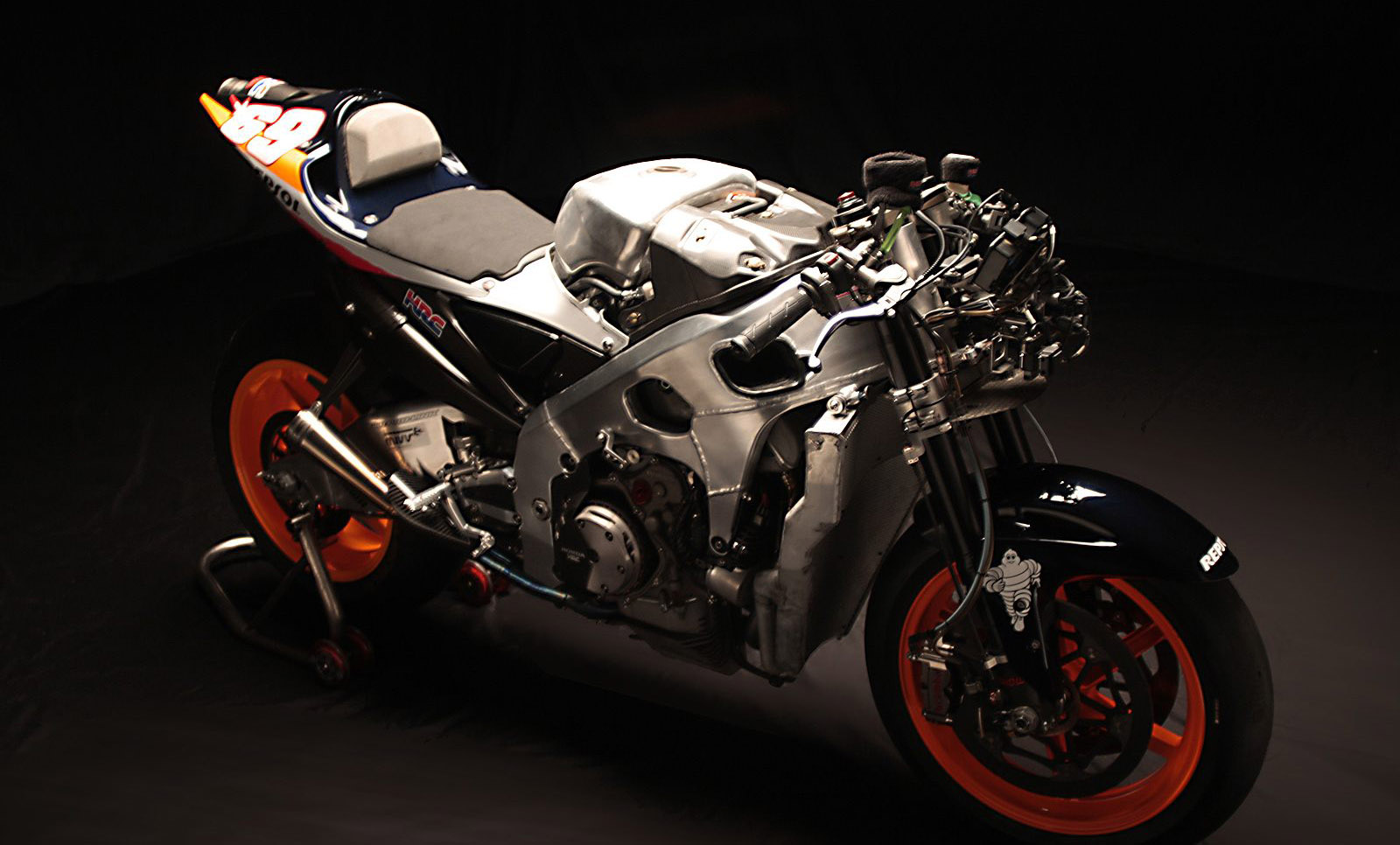 2006 brought with it Nicky Hayden's long yearned-for World Championship title, and was the year that Dani Pedrosa joined the team. But behind this year's success and in addition to the combo of two superstar riders, there was also some extremely conscientious technological development taking place. The engine was modified to make it slightly more compact, resetting the rear suspension and moving the swingarm forward. Modifications were also made to the electrical system, the clutch, and the frame, and the next evolutionary step of the HITCS system was included: the HITCS II system, now featuring a direct steel wire connection to the front three cylinders and an electronic connection for the rear pair. This new system responded to the rider's actions more quickly, allowing for more accurate throttle control.

This machine reached a respectable 260 hp, and rumour had it that it could even make it to over 300 hp. The last of the RC211Vs was the culmination of an era in which Honda motorbikes won three of the five World Championship titles and four constructor's titles. 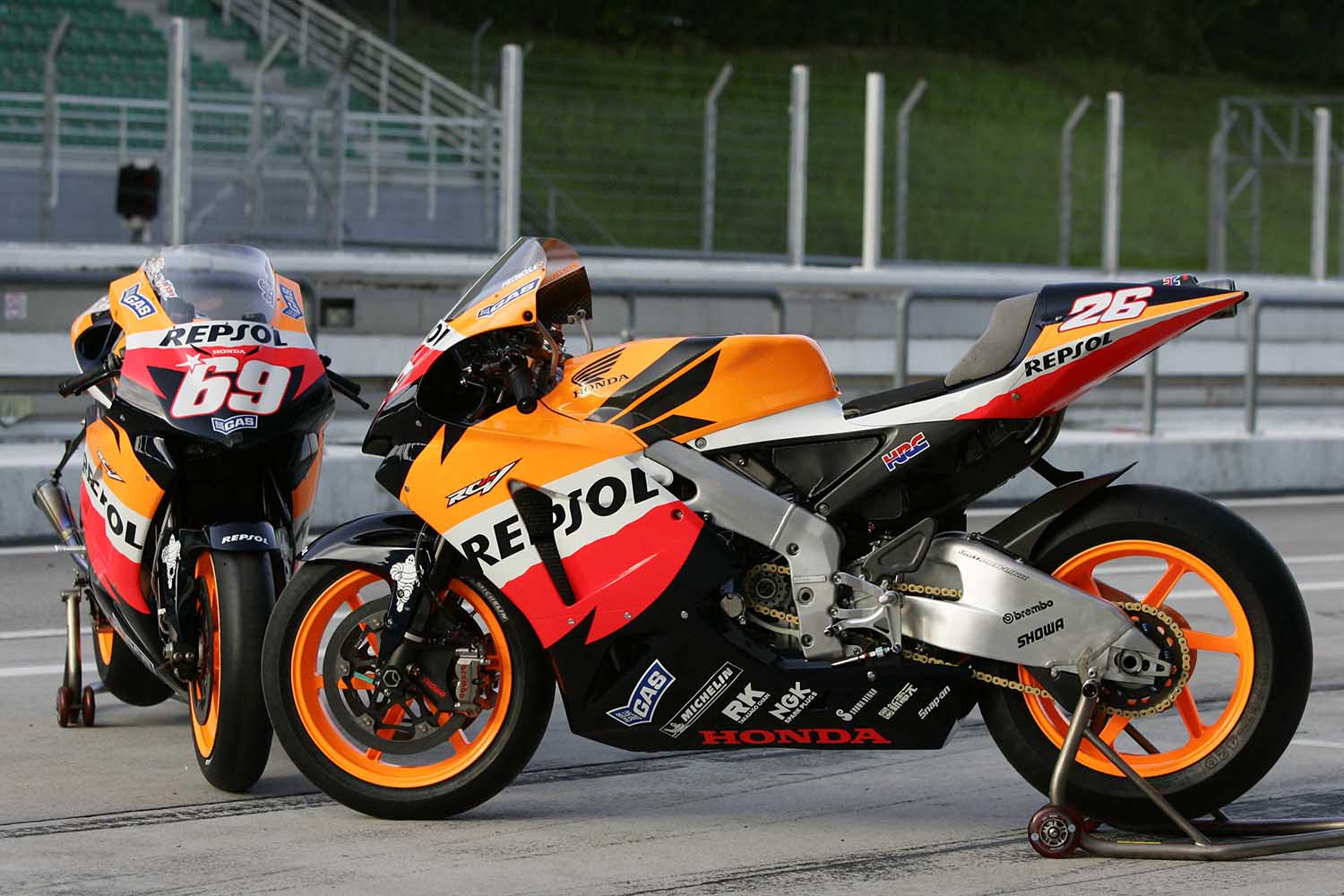 In 2007, with the regulations change making it necessary to change to 800cc engines, constructors presented their new models. Honda developed the RC121V, a motorbike that won the 2011 World Championship, which we'll look at in our next report together with the Repsol Honda Team's current machine: the RC213V.