The MotoGP World Championship arrives in Austria for the first of two races at the Red Bull Ring hot off the back of the Czech GP. It proved to be a trying weekend for the Repsol Honda Team, but both riders are ready to put the weekend behind them and focus on adapting their respective Repsol Honda RC213V machines to the Austrian circuit. At 4.3-kilometre-long, the Red Bull Ring is characterised by hard braking and heavy acceleration, producing memorable last laps in recent years.

After three hot weekends, the weather looks set to turn at the Motorrad Grand Prix von Österreich with heavy rain predicted throughout the weekend. For MotoGP rookie Alex Marquez, riding in the wet conditions will be another new challenge but the Moto2 World Champion has been quick to adapt to the wet in the past. Marquez currently sits second in the Rookie of the Year standings and is aiming to continue his perfect run of point scoring finishes in the premier class this weekend.

Stefan Bradl will once again join the Repsol Honda Team, filling in for the recovering Marc Marquez. It was a busy weekend in Brno for Bradl as he adapted to the 2020 RC213V and worked through a number of items for HRC. Although he finished outside of the points, Bradl showed strong progress over the course of the Czech weekend. The German joined the factory Honda team at the Red Bull Ring last year and raced to 13th place, returning to the points his objective for his second weekend aboard the RC213V.

Action at the Red Bull Ring begins at 09:55 Local Time with Free Practice 1 with a 90% chance of rain. 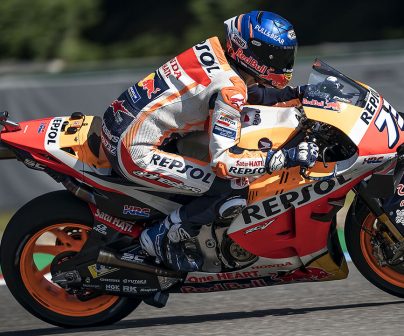