Álex Márquez continued his development as a MotoGP rider and completed some solid Free Practice sessions at the Circuit de Barcelona-Catalunya, in which he finished less than 8 tenths off the fastest time from FP2, FP3 and FP4.

The Repsol Honda team rookie concluded Q1 in eighth position, with a best time of 1:40.164 -his top lap of the weekend so far.

Repsol Honda teammate Stefan Bradl was just half a second slower, finishing Q1 in tenth position with a 1:40.721. He will be 20th on the grid on Sunday. 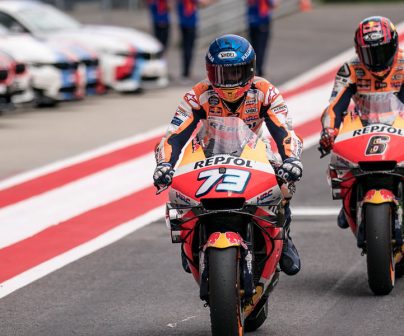 #AM73
“Today was a difficult situation, I wasn’t able to improve my time a lot as yesterday I did a 40.4 and today only a 40.1. We weren’t able to make a big step between days, so we are a little bit further behind. Tomorrow we have Warm Up to try something, especially in the electronics side to try and improve the rear grip. Managing the tyres will be important tomorrow, we saw in FP4 there is some variety with how fast riders are. Still the grip around the circuit isn’t high, so we need to try and find a solution.”

“We tried a lot of different things today in order to improve our feeling and speed. There’s still something to find for the race and the bike is very physical here, especially with the bumps. Hopefully we can get some early overtakes in and then ride with the others to see where they are stronger and what advantage we can take.”