After Sunday's scare, Isidre Esteve completed the seventh stage of the Dakar 2019 on Monday brilliantly at the wheel of his prototype BV6, and is now closer to successfully completing his third consecutive edition in the toughest race in the world. The Repsol Rally Team driver completed the 323 kilometres against the clock, starting and finishing in San Juan de Marcona, in 39th position, after taking 6 hours, 39 minutes and, 1 second.

Isidre Esteve and his co-driver Txema Villalobos faced the beginning of the day with the great challenge of starting afresh after the shock impact of a buggy in the middle of the Tanaka dunes the day before. Despite being on the verge of retiring, they got over the incident and raced a spectacular first part of stage seven. In fact, they finished in 21st position at the second waypoint.

"The incident looked much worse than it was and it took us very little time to recover from the shock. Today we were very comfortable from the start and we set an incredible pace. The car works perfectly, after the great work done by the team's mechanics during the night, and we have enjoyed driving a lot, as the times in the first 150 kilometres reflect," recognised a satisfied Isidre Esteve.

However at kilometre 170, his prototype BV6 got stuck in the sand and the Repsol Rally Team took about an hour in getting him out. "At the top of a dune, we lost momentum. We fell through the sand until we got stuck in a hole. Since I can not help Txema, we take twice as long as the rest of the teams to overcome the problems and this has affected us in the final ranking, despite the fact that in the last kilometres we picked up the pace," the driver from Llerida pointed out.

In the end, they were 2 hours, and 39 minutes off the day's winner, the Frenchman Stéphane Peterhansel (MINI). The driver from Oliana now occupies the 24th provisional position overall, with an accumulated time of 38 hours, 47 minutes, and 55 seconds, including a penalty hour for skipping a waypoint on Sunday night. These rankings are provisional, we are waiting for the organisation to apply the compensations to all the drivers, after the partial cancellations in the two previous stages. 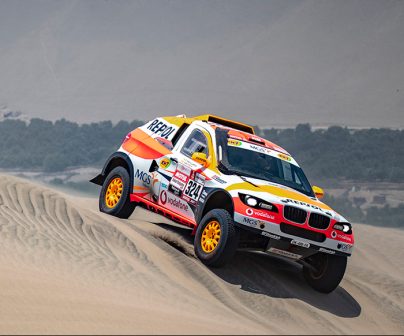 "In general, we are satisfied because we have a achieved a good pace. There are many factors that influence you when tackling the dunes and that makes you lose more or less time. We'll see where we end up at the end, because there are still three very tough days until we get to Lima and a lot of things could happen,” said Isidre Esteve.

Tomorrow, Tuesday, the eighth stage of the 100% Peruvian Dakar, starting in San Juan de Marcona and arriving in Isco, and back to the capital of the Andean country. The day will consist of 575 kilometres, 360 of which will be against the clock.