Home / MotoGP / Stéphane Peterhansel: “Márquez is more calculating than before”

A few years ago, Márquez wanted to win at all costs, but little by little he has been settling on podiums to secure the title.

When Repsol returned to the car class of the Dakar Rally in 2005, they did so with Mitsubishi factory vehicles and with Stéphane Peterhansel. He took his second car win that year, after previous bike successes that gave him the nickname “Monsieur Dakar”. Peterhansel remains a motorbike fan, and is a dedicated follower of MotoGP.

YOU WERE A REPSOL DRIVER IN THE DAKAR. WHAT DO YOU REMEMBER ABOUT THAT TIME?

“Personally, I have a very good memory of that part of my career, and I think that all of the drivers on the Repsol Mitsubishi team look back very fondly on it. It was the factory team, with its headquarters in France, but we were like a big family. It was a very professional outfit, and we had the great pleasure of working together. For me it was probably my best adventure on four wheels. I took my first wins driving a car at that time, and it was when the competition still took place in Africa –which made it special. We had Nani Roma –who had also come from bikes– and Luc Alphand, with the three of us forming a group of friends who came together to win races. There was a great atmosphere.”

DO YOU FOLLOW THE MOTOGP WORLD CHAMPIONSHIP? WHO IS YOUR FAVOURITE RIDER?

“I try never to miss a race. As for my favourites, throughout my own motorcycle racing career I was a factory Yamaha rider. Today, more than 30 years after my first contract with them, I still have agreements with the factory and we undertake projects together. It’s easy to guess which rider I appreciate the most: Valentino [Rossi]. My heart is with him, but I have to say that I have great respect for all the riders and there is one in particular that is incredible: Marc Márquez. He is the strongest on the bike and has the technique, the physique and the desire; He does things on the track that seem impossible and he is able to control all the situations he encounters. He is a phenomenon and at the moment he is superior to the rest.”

“I’ve always followed racing; When I started my career, in France we had a rider in 500cc two-stroke racing called Christian Sarron, and we knew each other well. Obviously, I also loved watching Doohan, Schwantz and all of that generation that dominated 500cc in the mid 80’s and 90’s.”

WE FOUND A PICTURE OF YOU IN THE REPSOL HONDA GARAGE, WITH HAYDEN’S BIKE… DO YOU REMEMBER WHEN THAT WAS TAKEN? WILL WE SEE YOU AGAIN AT A CIRCUIT?

“Yes, the team were invited by Repsol to watch a race. It was a very nice experience to be able to see the Repsol Honda Team garage from within. I have been to the French Grand Prix several times and this year I would like to go to the last race, in Valencia. My son asked me if we could go to a Grand Prix, so I’m excited to try to organise that.”

THE BRITISH GP WAS VERY UNUSUAL, HAVING TO BE SUSPENDED DUE TO RAIN AND PROBLEMS WITH THE TRACK. THAT’S A SITUATION YOU ENCOUNTER IN THE DAKAR, RIGHT?

“It is normal for us to cancel stages due to the rain, because we are going through places where it can completely change the terrain. What is clear is that the most important thing is the safety of the riders. In other outdoor sports, such as the World Cup of skiing, if conditions are bad then the race is cancelled. This happens with some regularity. Perhaps we must ask ourselves why the asphalt at the Silverstone circuit was not suited to the rain, especially in a country where it rains so much throughout the year, but there’s no point in making a controversy of it either. If the riders thought it was too dangerous, then we have to accept it, because safety has to come before everything else.” 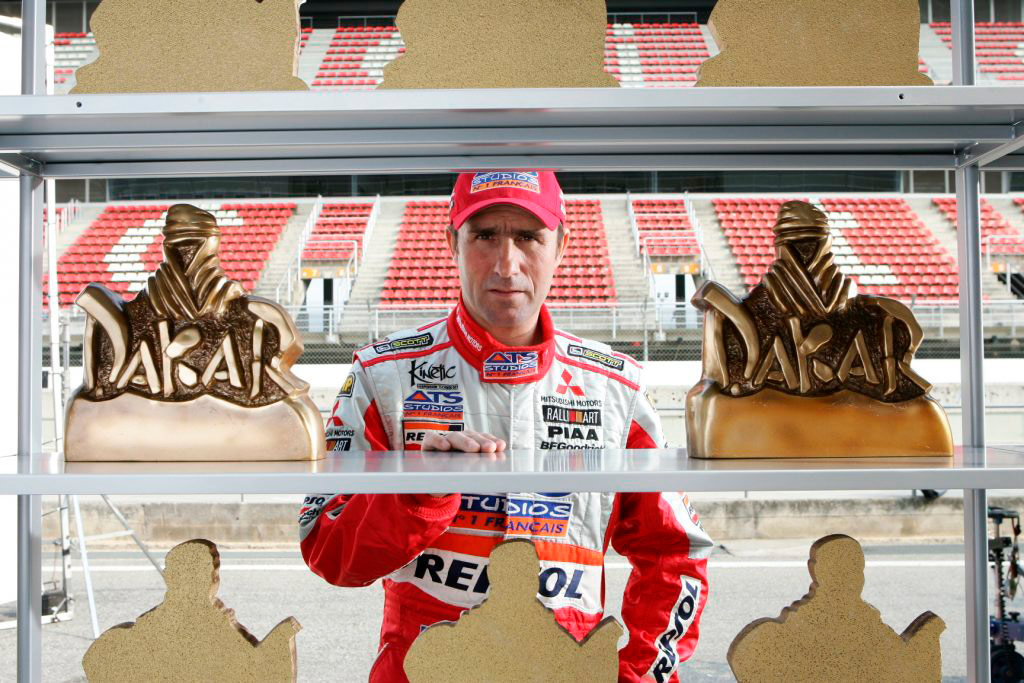 HOW DID YOU SEE THE FIRST HALF OF THE SEASON?

“We have seen the dominance of a rider rather than a manufacturer. What Marc Márquez does on a motorcycle is incredible and takes a bit of suspense from the competition, although for several races we have seen Ducati achieving very good results. That’s good for an attractive World Championship; Seeing Dovizioso and Lorenzo winning races makes it more interesting, but maybe it’s a bit late for them to take the title. At Yamaha things seem a bit more difficult and that’s a shame, because it seems that the bike is lagging behind a bit compared to the other factories; but Viñales and Rossi are two very good riders and I’m sure they’ll work hard.”

WHAT DO YOU THINK WE WILL SEE FROM HERE TO VALENCIA?

“The races are going to be divided up between Dovizioso, Lorenzo and Márquez. Right now, it seems that it will be a bit tougher for the rest, although I also believe that Marc, despite being much stronger than the others, has begun to accept finishing second or third. A few years ago he wanted to win at all costs, but little by little he has been settling for podiums to clinch the championship. Over the years, even having won several titles, he continues to learn and is more calculating than before. Nevertheless, we know that from time to time there are situations where he will take it to the limit.”

WHAT DO YOU THINK OF DANI PEDROSA’S CAREER AND WHAT CAN WE EXPECT FROM HIM IN THE RACES THAT HE HAS LEFT TO RUN?

“I think that since he decided to retire, his performance has been somewhat inferior. I get the impression that he is a very talented rider who has lacked a bit of luck. He has had many injuries and very few seasons in which everything went well. When everything is in place he can win races, but it gets more and more difficult. With a new generation of riders like Marc coming up, it’s tough –even more so if you’re his teammate and there is a direct comparison. It must be difficult to have a rider of Marc’s calibre alongside him.”

“For the moment, after four years at Peugeot that have gone very well, I am in the middle of reflecting to see if I will continue or not. I have different options and if I drive in the next Dakar, it will be the 30th time, so I am thinking it over. In about a month I will make the decision about whether I will continue or not.”