Isidre Esteve had his scariest moment of the 2018 Dakar. His prototype BV6 was hit by a buggy in a dune and he almost had to retire from the race. Fortunately, everything was just a scare and thanks to the great work of his co-driver Txema Villalobos and help from other participants, they were able to rescue the vehicle from the sand and continue the race two hours later. After the incident, the Repsol Rally Team driver reacted bravely to reach the finish line near the top thirty.

After the rest day, the race resumed with stage six between Arequipa and San Juan de Marcona, which Isidre Esteve will never forget. While trying to get out of the Tanaka dunes, at kilometre 20 of the 309 against the clock, his vehicle was involved in an incident that seriously endangered his participation in the competition. “We were stranded in the sand, when a buggy fell on us”, explained the driver from Oliana on his arrival at the camp, still in shock.

Fortunately, despite the spectacular collision, both Isidre Esteve and Txema Villalobos were unharmed. "We're both fine, although we've had a real scare. I was inside the car and Txema was able to run away when he heard the buggy coming”, said the driver from Llerida who, because of his spinal injury, couldn't leave his vehicle.

After the incident, it was very difficult for them to get out of the predicament and they could not have done it without the help of the KH-7 Epsilon Team truck. It took around two hours for them to be able to rejoin the race and with their prototype BV6 badly damaged, especially at the rear. "Without the help of Jordi Juvanteny, José Luis Criado and Xavi Domènech we would still be there. We are eternally grateful”, insisted Isidre Esteve.

Despite the shock, the driver from Llerida found the courage to drive at speed after the incident. From there until the end of the stage 233 kilometres of special awaited them, where they managed to make up twenty positions, from 56th at way point 1.

"After a very difficult start, in the second part of the special we drove at a very good pace, until fifty kilometres from the end we got trapped in a blocked canyon and we were there for an hour, although the organisation said they give us the time back... It has been a hard day, since we left the camp at 5 a.m. this morning and returning at 9:45 p.m.... but this is Dakar", said the driver in his usual good mood.

His time of 8 hours, 15 minutes, and 14 seconds has left him in the 39th place of the day, although he will win gain several places when he receives the time lost in the canyon. In the absence of official time, Isidre Esteve is 27th in the general ranking, from where he will try to work his way up the ranking, starting this Monday, when the seventh stage is being held, a loop starting and finishing in San Juan de Marcona, with a special of 323 kilometres. “The really important thing is that we continue safely and that the car, mechanically speaking, is perfect,”, he said relievedly. 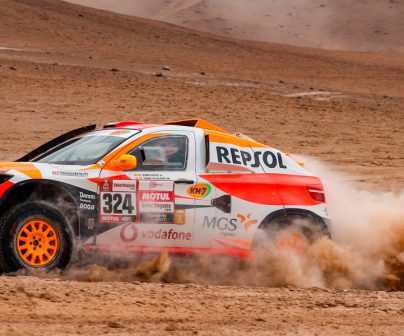 First goal reached for Isidre Esteve in the Dakar 2019