Home / Rally / Isidre Esteve makes it into the top 20 overall

Isidre Esteve overcame the first part of the marathon stage of the Dakar 2019 brilliantly. Despite the demanding terrain, the Repsol Rally Team driver fulfilled his mission of reaching the camp with his prototype BV6's mechanics intact. In addition, the driver from Oliana made up five positions and is already 21st overall.

From the moment the 100% Peruvian Dakar was officially announced, Isidre Esteve and his co-driver Txema Villalobos had concerns about Thursday's stage, leaving from Arequipa and arriving in Tacna. Both were aware of the difficulties involved in the 405 kilometre timed stage, on a very varied terrain, with the fesh-fesh as the main danger, and no possibility of receiving mechanical assistance at the end.

"It was a difficult day and very hard on the mechanics, we had to deal with fesh-fesh covering the windscreen and stony riverbeds that could've led to a puncture. We are happy to have completed the stage without any problems, except for getting stuck in a low visibility area that luckily only set us back ten minutes,” summed up the driver from Llerida.

At the end of the special, with two timed sections of 205 and 146 kilometres and an intermediate liaison of 54 kilometres, the Repsol Rally Team has set a time of 4 hours, 56 minutes, and 35 seconds, which leaves them in 24th position at the end of the day and equals their best partial result of this edition. However, overall, Isidre Esteve has climbed five places and is already 21st, precisely the same place finished the Dakar 2018.

"We are very satisfied because little by little we are finding our rhythm, which is considerably better than last year. Txema Villalobos is having a great Dakar and is successfully overcoming all the obstacles. We've been running into obstacles every day because the roadbook is not accurate enough and that forces us to slow down when it's not necessary,” he said. 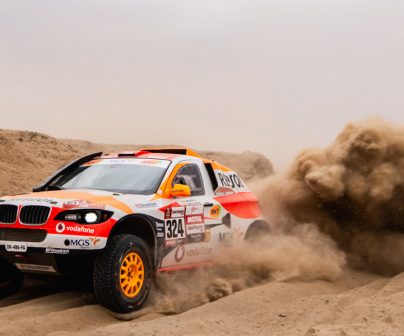 Thanks to his skill behind the wheel and the reliability of his BV6 prototype, Isidre Esteve is about to finish a great first week in Dakar. For now, we are close to achieving our first goal we set before starting: to reach the rest day without losing much time overall.

To achieve this, the Repsol Rally Team must finish the marathon tomorrow, Friday, without any setbacks. Participants competing in cars will have to travel 714 kilometres (517 timed and 197 liaison). “This edition is turning out to be as hard as we imagined and I am sure that tomorrow's stage will also be very tricky,” predicts Isidre Esteve.