Isidre Esteve suffered his first serious setback of Dakar 2019 on Wednesday. In the third stage, which left several favourites out of action, the Repsol Rally Team driver had to take extreme precautions after two tyres came off the rims at once and they ran out of spares until the regrouping. Even so, the driver from Lérida remains in the top 30 in the general classification with his BV6 prototype, before tomorrow's dreaded marathon.

The day, between San Juan de Marcona and Arequipa, consisted of 331 timed kilometres that were very demanding, especially at the start. Isidre Esteve and co-driver Txema Villalobos faced an unexpected setback at kilometre 70. "We started with low tire pressure to make it easier over the complicated dunes in the first few kilometres. We were fine, until two wheels came off the rims at once and we were left without spare tyres”, explained the driver.

As a precaution, they decided to increase the pressure to avoid risking a puncture, which could have been fatal. “Our goal was to get to the service park to pick up some spare wheels and we managed it, although when we changed the pressure we got stuck in a dune 15 kilometres later and lost a lot of time”.

All this resulted in them passing through waypoint 5 an hour and a half behind the leader. From there on, the Repsol Rally Team managed to set a good pace that allowed them to climb seven places, from 40th to 33rd. Without any further incidents, they were able to complete the day in their Dakar Sodicars Racing prototype two hours behind the day's winner, the Frenchman Stéphane Peterhansel.

Specifically, Isidre Esteve took 5 hours, 55 minutes, and 41 seconds, a record that leaves him 33rd in the stage and seventh in his category, T1.2 (off-road modified 4x4 vehicles). "It was not our best day, but it was not so bad either. Txema Villalobos navigated perfectly and we have overcome a complicated day with the mechanics intact. In general, we feel satisfied, especially because we finished without any technical problems ahead of tomorrow's marathon, and that is crucial”, said the driver from Oliana.

After the first three stages, Isidre Esteve is 26th overall and 6th in his category, T1.2, with a cumulative time of 11 hours, 24 minutes, and 13 seconds. In addition, he is already the third highest Spaniard in the ranking in a car. A good way to take on the first part of the 663 kilometre marathon tomorrow between Arequipa and Tacna, 406 km of which will be special. 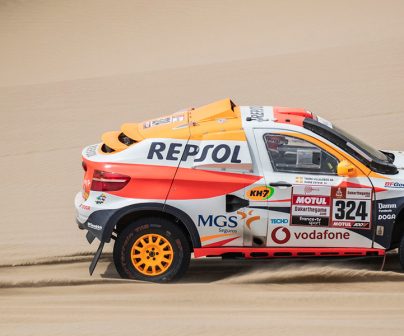