Although there are several restrictions since the implementation of unified switchboard and software, electronics are a fundamental part of MotoGPs and they are pivotal in optimising engine performance. They also play a role in terms of safety, as controlling around 270 CV on just one wheel of such a light vehicle would be an impossible task without electronics. Without them, maximum acceleration, even in second or third gear, would cause the wheel to spin when going around bends. This is where traction control comes into play. 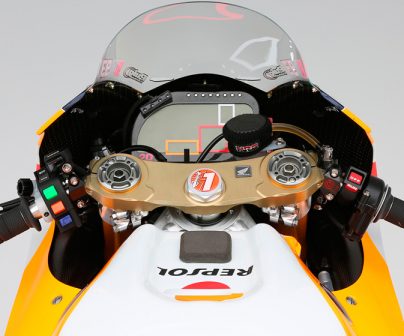 What are the buttons on a MotoGP bike for?

Traction control tends to be based around the data sent by the wheel speed sensors. If the rear wheel is turning much faster than the front wheel (by about 12%, depending on the desired setting), the system works to correct it. The main reason for this is that a skidding rear wheel endangers overall stability and grip.

In this case, traction control will make the ECU act, often shutting off the accelerator. This is made possible by “ride by wire” technology, an electrical connection between the accelerator and the throttle valves. Other more extreme measures could be adapting cylinder ignition timings, leaving one of them without a spark, or even combining some of the things that we've mentioned.

The system also takes the lean angle of the vehicle into account before making decisions, as well as the gear position, which changes the force that the engine transmits to the rear wheel. All of these measurements are calculated in a fraction of a second to make a barely noticeable decision that could otherwise have dramatic consequences.

Let's take the example of a rider going around a turn leaning at a 60° angle. They put their foot down to lift up the bike towards the end of the bend. If our rider pushes the accelerator too far, the engine gives the tyre too much torque. As a result, the wheel starts skidding aggressively, making the rear part of the bike critical. At this moment, the speed sensors that we mentioned earlier send the ECU a signal that the rear wheel is turning too fast. The software compares this data with the team's programmed data in the box. After determining that the wheel is sliding, it forces the engine to partially close the accelerator. The torque that the engine sends to the transmission is reduced and keeps skidding to an acceptable level. When the rider finally manages to lift the motorbike, regain a vertical position, and increase their speed, the intervention is no longer necessary and the ECU's request reduces until normal function is reached again.

Thanks to this system we can accelerate safely. It allows the rear part of the motorbike to skid slightly and helps preserve our brakes.

Traction control lets us make use of maximum acceleration, whether at the start line or when taking a turn. However, the grip of the back wheel in conjunction with the engine power makes the front wheel lift up in a wheelie. To stop this happening, MotoGP riders benefit from another electronic setting, called anti-wheelie control.

Whilst traction control is a safety measure, anti-wheelie control is only used as a performance optimisation system. Due to the limitations that Dorna imposes on system upgrades, this is now a very basic component compared to the ones we used to find before unified ECU and software were implemented.

Just like traction control, the anti wheelie system compares the turning speed of both wheels. It detects when the front tyre is slowing down while the engine is accelerating. Thanks to the suspension sensor, the ECU is able to detect if the front wheel is raised or not. Located on the front fork, this sensor indicates the position of the suspension. When fully extended, it's a clear sign that the front wheel is in the air and the anti-wheelie should take action. In addition, it processes the information provided by the inertial platform, dismissing the possibility that skidding is causing the difference between the angles of both wheels.

When it starts up, the anti-wheelie control works in a similar way to traction control, restricting the opening of the accelerator and applying other measures where necessary.

These are just two examples of electronics and data collection in MotoGP. Systems like traction control and the anti-wheelie ensure optimal bike performance, allowing our riders to push themselves to the limit on the circuit. 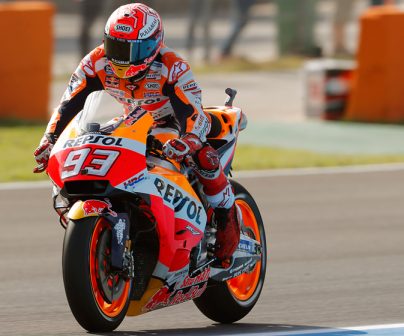