Home / MotoGP / The MotoGP pit board: the connection between the rider and his team

One of the elements that has changed the least since the beginning of racing is the form of communication between the rider and his team in the midst of a race. The pit board is an element that allows the rider to be completely informed of his situation and surroundings. In essence, it continues to serve the same purpose as it did more than a hundred years ago, when a clever technician had the idea to write useful information on a board to show to the rider. We don't know who invented it, but there's no doubt that it's been one of the best ideas to come about in the world of racing. 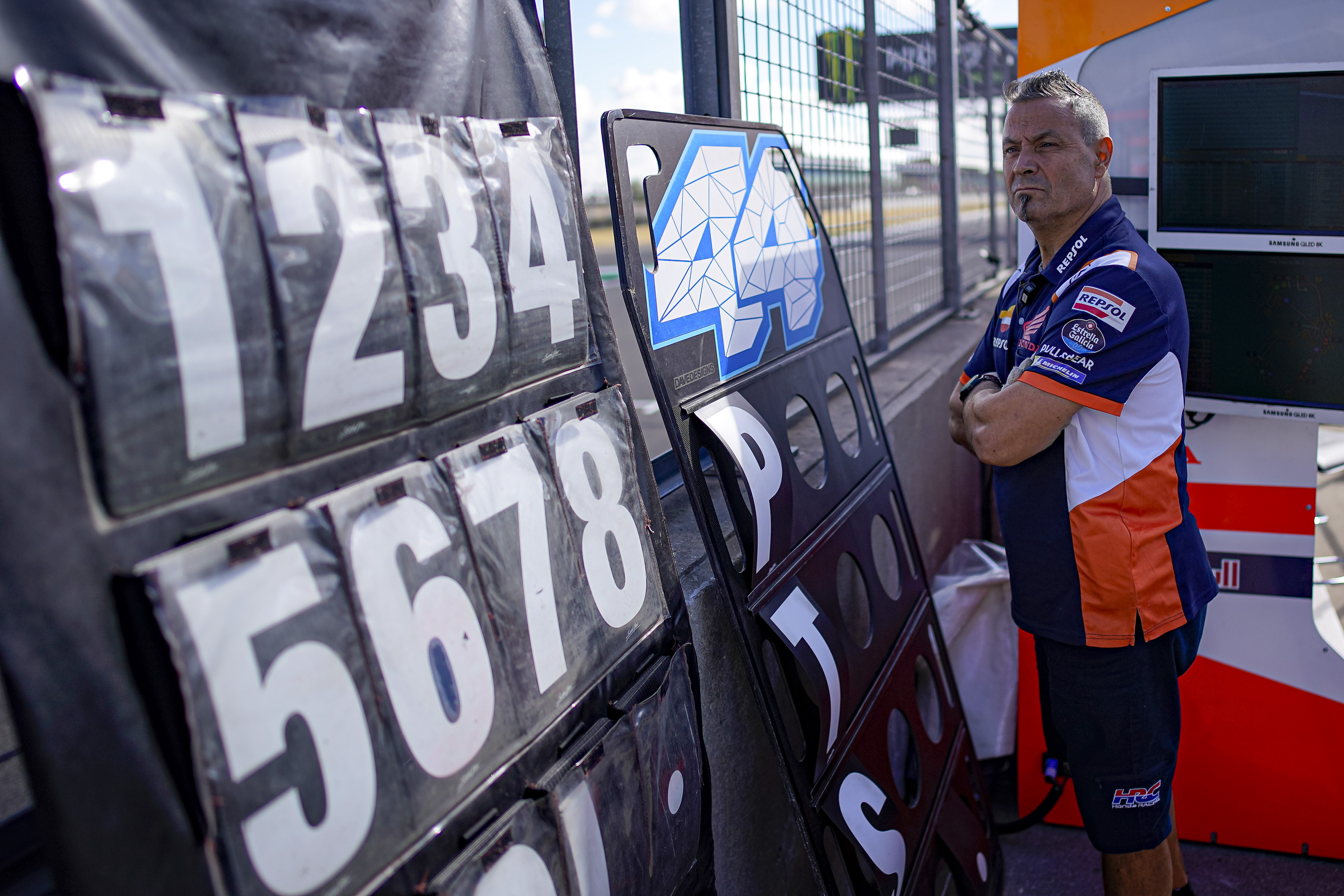 Despite its proven effectiveness, there are times when it isn't always easy to understand. In the early years of Montesa, Francisco X. Bultó alerted his riders of their positions with a pit board. In one race, Juan Soler Bultó turned his head to look, but when he passed the finish line, he kept insisting otherwise by showing two fingers on his left hand. Bultó continued to show P1 on the pit board, that is, that the rider was in first position in the race. But every time he passed, Soler kept signalling "two" with his fingers, over and over again. Bultó was getting frustrated and wrote "YOU'RE IN FIRST" in huge letters on the pit board. But it was of little use; Soler continued to signal "two". He ended up winning the race, and when he arrived to the boxes, a puzzled Bultó asked him if he hadn't seen the pit board, where Bultó had notified him that he was leading the race. "Yes, I saw it," he responded, "but I was trying to tell you that the gear shift had failed, and I completed the entire race in second gear." A prime example of a conversation at cross purposes...

Other times the pit board can relay some less satisfying messages that could even lead to the end of a relationship. This happened in 1988 with Alex Crivillé and Derbi. With Jorge Martínez Aspar clearly dominating the World Championship in 80cc and 125cc, Derbi decided that the 80cc runner-up should be Manuel Herreros, and they needed to communicate that to Crivillé, so he could allow Herreros to get ahead of him. Throughout the race, the young hotshot from Seva, Barcelona, remained in third whereas Herreros, who had been hurt in the last race, couldn't move up from seventh position. From the wall, his team tried to signal him the orders. They decided to write "Box" on the pit board so that he would get into the pit lane and lose ground to Herreros, but Josep Crivillé, Alex's older brother, who was in charge of the pit board, refused to show it to him. Another member of the team did, but Alex didn't listen. He remained in third and ended up placing second that season.

His insubordination put him on the stand, and removing him from the team was considered as punishment. He was called in by the boss of Derbi, Andreu Rabasa, who handed him a harsh scolding, but he continued competing with the brand until the end of the season. However, the connection was already broken. Crivillé left the team at the end of the year and signed with JJ-Cobas for 1989, with whom he would become 125cc world champion, as the youngest winner in history.

The pit board and the dashboard

One benefit of the pit board is that it allows the rider to remain focused on driving, whether in training or true races, and only while passing his team's position at the finish line does he distract himself just a second to make sure everything is in order. Now, technology allows us to send all kinds of information to the bike's digital panel but despite having that information at hand, the pit board is still being used. Information on time per lap is now immediately shown on the bike, something that, when the pit board was the only option, was relayed one lap behind.

This time difference also caused a delay in the rider's reaction. Generally in practice sessions, the time left in the session, the best time, and the rider's position, were displayed on the pit board. With that information available on the bike's digital panel, the information shown on the pit board has been simplified. It's basically limited to specific directions, such as entering the box and little more, although these messages are also available on the dashboard, saving time and making work easier. There's no doubt that digitalisation has improved the dynamics of practice sessions. 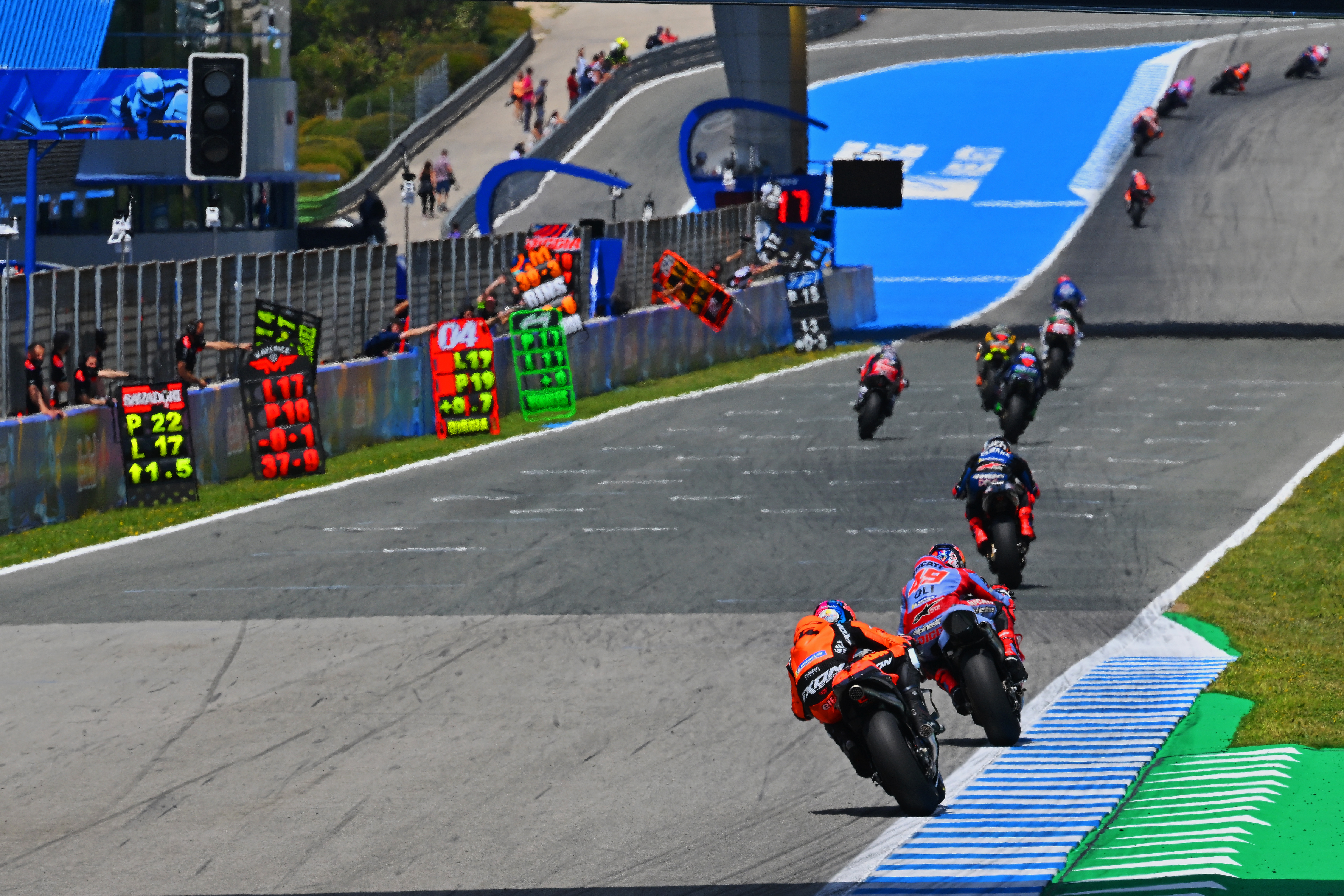 But despite having access to this new technology, the pit board still plays a key role. After all, even with the dashboard's modern communication system, the pit board is still being used. Each rider prefers having certain information at hand. Normally during races, the number of laps remaining (L), the position (P), the distance separating the rider from the nearest up ahead (-1.5, for example, which means the other rider is one and a half seconds ahead), and the lead he has over the next rider (+1.9, or 1.9 seconds of lead) are shown.

Each rider has his own preferences for the information displayed on the pit board. Marc Márquez likes it to be very clear and simple. "In practice sessions, laps remaining, position, and the best time are shown. And when moving up to Q2 is in question and his direct access isn't certain, we show the rider's time who is in tenth, the limit for passing on, and that way he knows how far he needs to go to qualify," says Marc's pit board manager.

"In races, the position and the group trailing are shown. The difference, and underneath that, the number of riders in the group are shown. Other directions are also shown, but they are decided before the race starts. For example, if he's fighting for a championship and one of his rivals has an accident or falls behind, Marc wants to know that; but that is, of course, much later in the season," he says. 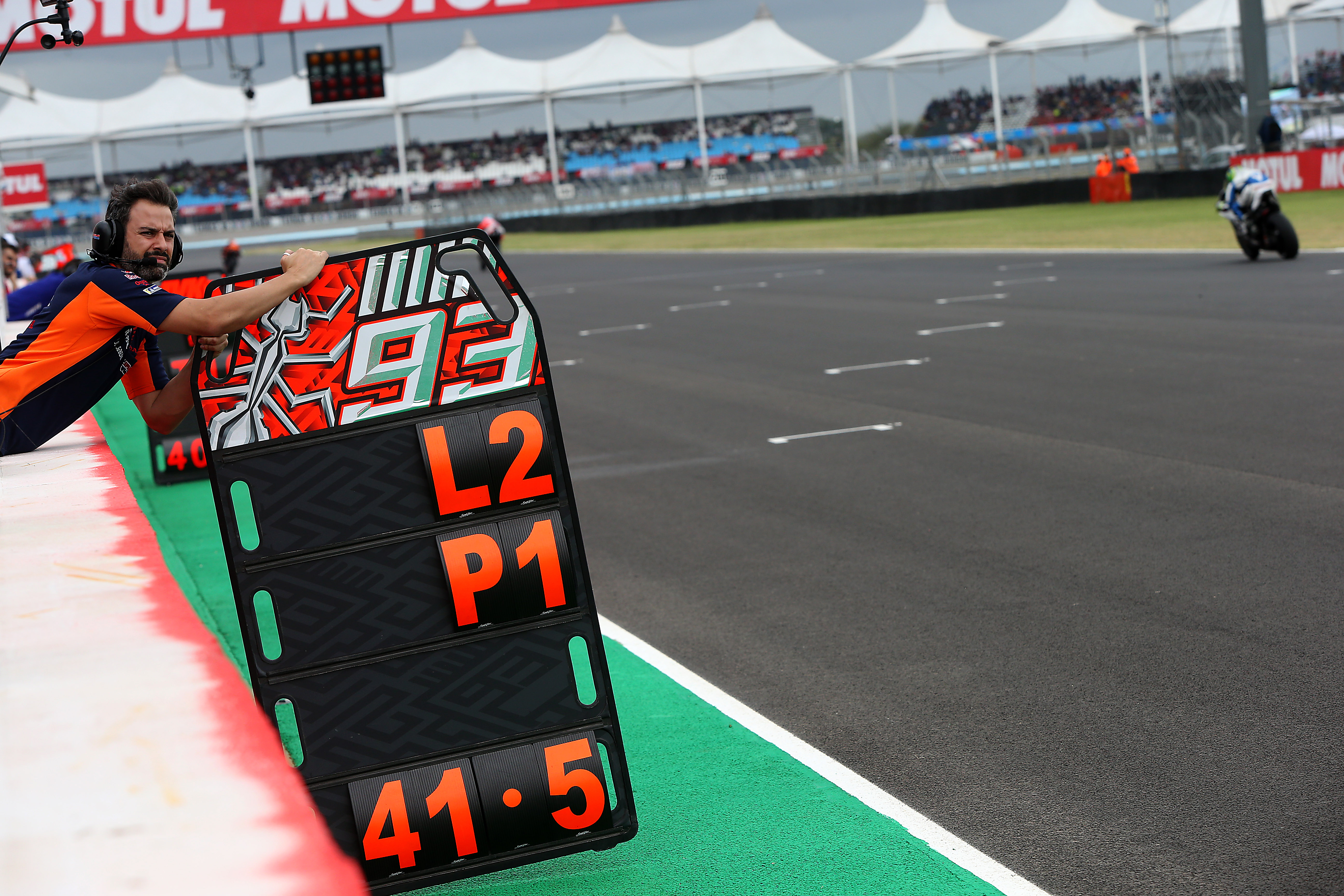 His pit board is always very clear with its message, without being misleading or dressing up the truth to get him to improve his times. "We always show the truth. Marc can't be mislead," he tells us. And there's not much more information to be displayed because any engine or mapping change strategy is something agreed upon before the race, and it's the rider himself that handles it. "It's all really simple with Marc, and there aren't usually any hidden messages. We've only done that very few times," he says.

For Pol Espargaró, the type of information is a little different but equally simple. "The information to be shown is agreed upon ahead of time between Ramón Aurín and Pol," says Juan Llansá, Espargaró's pit board manager. "The best time of the session, his position, and then we have sectors, with the circuit divided into three. We tell him S1, S2, or S3 depending on the area where he's having the most difficulties, and that way, he can see clearly where he needs to make some improvements. In races, the position and the difference with the next rider is shown."

Pol's team also refrains from manipulating the information to get a reaction. It's all very basic: "During the race, we only tell him his position and the difference with the rider behind him, and in the last ten laps, we tell him the number of remaining laps in the race." 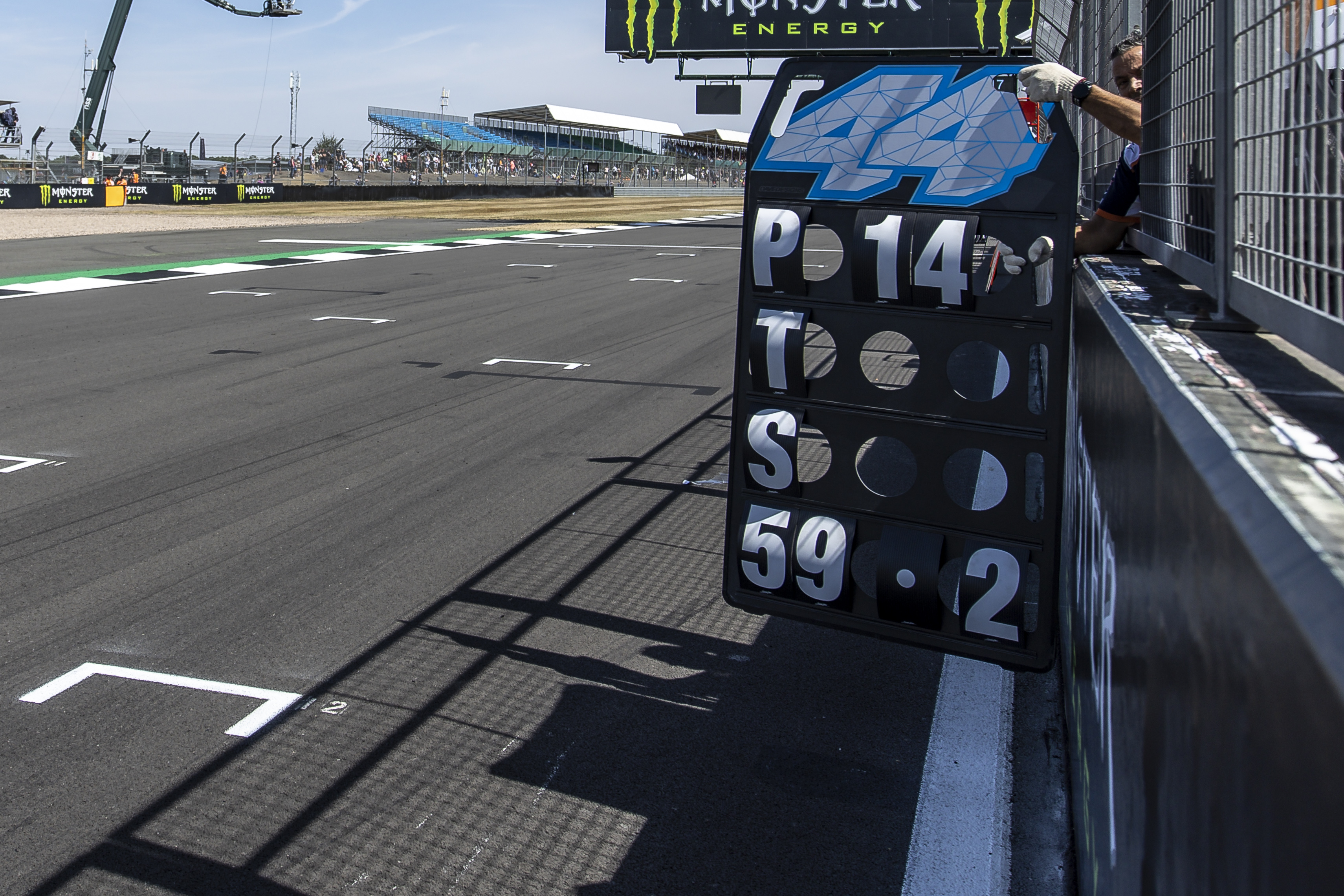 Electronic adjustments of the engine are also agreed upon ahead of time between Pol, Aurín, and the electronics technician. That way it's the rider himself that enters the necessary modifications at the right time.

As we can see, this information follows a scheme so that, with a quick glance, the rider can learn his situation in the race. It's important to keep in mind that the pit lane is located near the finish line and riders pass their teams at super high speeds, so an excessively long or complex message would not only be hard to understand but also a major distraction to the rider. Messages on the pit board can also depend on the speciality. For example, at critical moments in motocross, the pace of the lap is usually shown to the rider. If, for example, "27" is displayed, it's a reference to the time per lap – a lap in motocross usually takes more than two minutes – and this helps the rider to know if he has to pick up the pace or not because time differences between riders are very relative in just one lap, depending on the section chosen.

Back to topics of speed, there is also additional information that, at certain times, may be beneficial for the rider to know. For example, if a certain rival has an incident (KO, Out, etc.), he'd want to know. Information regarding race strategies is also shared, such as when to change an engine mode to preserve tyres or save fuel, or to establish team orders for dropping behind a team member for training purposes. The team can also show on the pit board any type of information regarding the rider's penalties from the wall, even though Race Direction also shows this themselves, both on the dashboard and on the pit lane wall. But it's never too much for information of that type.

This is precisely another of the added benefits of digital instrumentation: the direct connection between Race Direction and the rider. If the rider is penalised with the dreaded Long Lap, for example, for having committed an infraction, they will be notified both on the pit lane wall as well as immediately on their dashboard. Thus, doing away with the age-old excuse of "not seeing the pit board".

Digitalisation has made communication between the rider and his team, something that before remained private, into a public topic because this information is sometimes even shared on televised broadcasting, a matter in the hands of Dorna production. Depending on the significance of the information, it can be shared as just another piece of information about the race, like classifications and other details, such as tyre choice or positions gained by a rider. If in any determined moment of the race, some significant information is sent by the rider's team to his dashboard, production can "tap into" the device and share it with the audience, and therefore, his competitors.

The last form of communication between the rider and his team is radio communication, which has been used in Formula 1 for decades, but after various attempts in MotoGP, which go back to the era of 500cc, there's no unanimous opinion on incorporating this system of communication. Thirty years ago, audio systems were more intrusive and awkward to use, but now everything is more dynamic and natural. However, when there is someone on a bike in the background, it can be difficult to find the right time to give them comments or directions. What's certain is, for now, given that there isn't any general agreement on its use, radio will probably keep its distance from MotoGP. 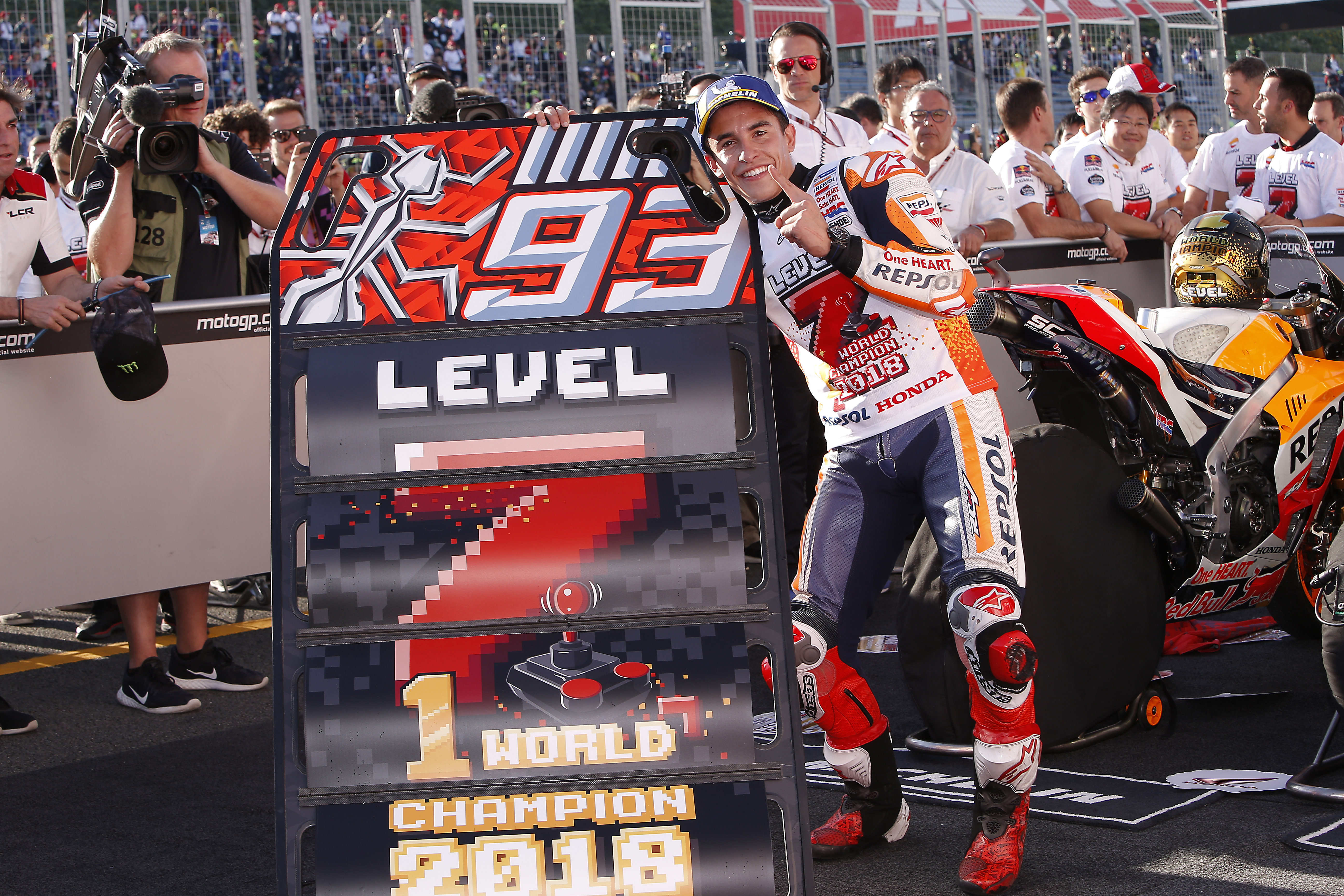 So, for these reasons, the pit board will continue to be the primary form of direct communication with the rider. It's the common link between those on the wall and the one on the track. The coldness and distance of the dashboard doesn't compare with the nearness and confidence that comes from the team's pit board, where many times the person in charge includes icons or another series of pre-established messages, like secret codes that reassure the rider. And when the work is done, at the end of the season, the old familiar message, "World Champion!", is the best prize, and much better received from the pit board than the static TFT screen on the dashboard.