On a day of close times and low temperatures, Repsol Honda rookie Álex Márquez continued to evolve onboard his RC213V at the legendary Le Mans circuit. He reached the Top 8 for a few moments during FP3, then placed eighth in Q1 with a best time of 1:32.774. Márquez will start from eighteenth on the grid for tomorrow's race.

Teammate Stefan Bradl completed Q1 in eleventh position, with a fastest time of 1:32.861. He will take off from 21st at the French Grand Prix. 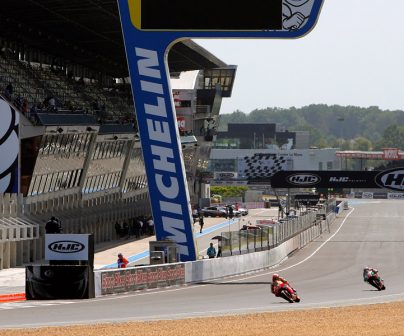 “Today we started very well in Qualifying but there was a little bit of misunderstanding about the strategy, so I wasn’t able to benefit from the slipstream like all the other riders who went faster. It was a bit of a shame but our pace is very close to everyone else so I think we can make something happen in the race. We have to be careful because the forecast is looking really cold and making a mistake will be really easy, Turn 2 will be especially important to pay attention to. The plan is to make a good start and then see what the race brings, we are close to Nakagami and this will be a good reference.”

"Our position is a bit disappointing but to be honest I am quite pleased with how myself and the team have been working. We had a good FP4 where we were able to do a lot with the used tyre and our pace is looking OK. With everyone so close you can gain a lot of positions with just a tenth of a second, so I was a bit unlucky to be just behind those guys ahead. We’ve been managing everything well considering we are on day four of riding. Let’s hope for good weather!"