Phillip Island welcomed the newly crowned 2018 World Champion Marc Márquez last weekend, and in the wake of his seventh world title he achieved pole position at the Australian track. Unfortunately, an incident during the race forced him to retire due to the damage suffered to his bike. His teammate, Dani Pedrosa, also crashed and could not continue the race.

With one more round remaining of the flyaway stage of the season, Alberto Puig, Team Manager of the Repsol Honda team, comments on what happened on a difficult Sunday for both riders.

Question. What was the strategy for the Phillip Island race?

Answer. Márquez wanted to stay in the front group and wait until the end of the race to fight for the victory. Unfortunately, Zarco made contact with him at the end of the straight and he had to retire.

A. The positive and negative points are Marc’s retirement. The positive is that both Márquez and Zarco are OK, because it was a bad place to crash. The negative is that Marc and also Dani [Pedrosa] did not finish the race, which is the first time that this has happened since Argentina last year.

Q. The inside story apart from official comments?

A. It’s been a busy week for Marc. After he won the title in Japan last week he had once again many interviews and many events to attend. It was good that Marc and Dani could greet the Aussie fans on the stage at the track. 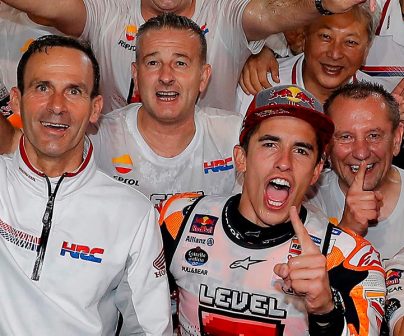