Isidre Esteve had a bittersweet debut at the new Dakar in Saudi Arabia. The Repsol Rally Team driver was not able to race at the desired pace because of two punctures that required him to slow down at the risk of being stuck without a spare tyre. Despite this unexpected setback, the driver completed the first stage in the laudable position of 41st place, only three places behind where he started exactly one year ago in Peru (39th).

“It was a tough day due to the punctures, but the most important thing is that we’ve finally started the race and the car is working without issue. Despite the difficulty of the stage, navigation also went well, except in a few places where we had some doubts. Nevertheless, we were able to correct our mistakes and barely lost any time as a result”, said Esteve at the end of the first timed special.

The organization had warned that the first stage of the new Dakar between Jeddah and Al Wajh would be long, demanding, and quite varied, and it was just that. In the 319 timed kilometres, participants had to cross dunes, dry rivers, paths, and areas with boulders that put driver’s skills and vehicles’ resistance to the test.

Esteve started in 25th place first thing in the morning and, 25 km from the finish line, he had to stop due to a puncture, which was repaired in less than five minutes by co-pilot Txema Villalobos, who repaired the puncture alone, since, due to a spinal injury, Esteve could not get out of the car to help him. Toward the middle of the timed special, when they attempted to recover their race pace, the BV6 got a second puncture.

“We crossed the starting line with the tyre pressure too low, which allowed us to cross the dunes well, but hurt us in the rocky areas. After the second puncture we still had many kilometres to go and couldn't risk getting stuck without a spare tyre, so we decided to carry on slowly. This situation taught us a very important lesson for the future”, said the Oliana-born driver.

Despite the amount of time lost changing the tyre and slowing down the pace, the Repsol Rally Team crossed the finish line in 41st place overall and 7th in the T1.2 class (4x4 modified all-terrain diesel vehicle), with a time of 4 hours, 23 minutes, and 41 seconds. At Dakar 2019, where you’ll recall the team finished 21st overall, Esteve finished the first stage in Peru in 39th place. 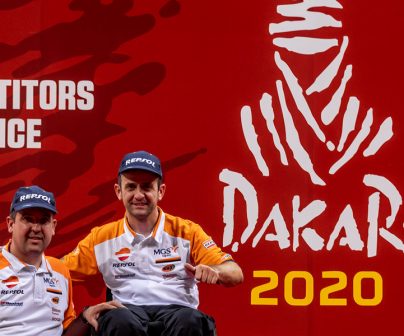 Isidre Esteve thankful for his welcome in Saudi Arabia

“Today’s partial result is trivial and in no way a concern, because this is a long race that has only just begun. The first few days are always tough and teams need to know how to take them in their stride, since the teams have everything to lose and nothing to gain. We saw several cars with problems today; the most important thing is to keep going and find our rightful place in the race”.

Tomorrow, Monday, the second stage between Al Wajh and Neom will take place with a 367 km timed special and only 26 km of liaison. The new aspect is that, for the first time in Dakar history, the road book will be handed out only minutes prior to the start with the indications already marked by the organization. “I really like this change, because the aim is to balance out the participants and ensure that everyone has the same information about the route”, said Esteve, who will take on the day with two objectives: “Go at our own pace and finish the day without any issues”.