Isidre Esteve managed to complete the Dakar for the third consecutive year in a car. The Repsol Rally Team driver successfully overcame one of the most difficult editions to date, in his BV6 prototype with adapted controls on the steering wheel. And he did it brilliantly, finishing sixth in his T1.2 category (off-road modified 4x4 vehicles) and 21st overall. “We are very happy to have over come such a difficult edition”, admitted the driver from Llerida upon his arrival in Lima (Peru).

As was predicted yesterday by Isidre Esteve, the last stage between Pisco and Lima was not a formality and the 112 kilometres against the clock once again put the fifty or so 'survivors' in the car category through their paces. "We had a huge scare when the car stopped in the sand, with 15 kilometres to go. Luckily, we had already passed the most complicated part of the dunes and my co-driver Txema Villalobos, as always, was able to sort out the problem quickly to be able to continue until the end”, explained the driver, 36th in the stage.

Fortunately, everything is just an anecdote and the Repsol Rally Team managed to reach the finish line and celebrate their success. "It's the third year in a row that we've finished it, but the sensations are different every time. We continue to move forward and we are satisfied, above all, because we have shown we can set a good pace,” valued Isidre Esteve, happily.

His 21st place finish in the car category equals his achievement just a year ago, although the driver from Llerida values it more: We value this result much more than in 2018, because this edition has been extremely hard and with many more dunes, where it is easier to make mistakes and lose time, as was what happened to us on a few stages. The leaders have raced much harder than in other years and we know how hard it has been to keep up with them."

After 5,000 kilometres in total, 3,000 of them against the clock, his total time has been 52 hours, 49 minutes, and 10 seconds. If it were not for the 1 hour and 40 minutes received for two penalties, Isidre Esteve and co-driver Txema Villalobos could have sneaked into the top 20, which was topped by the Hungarian Balazs Szalay (Opel) with a 1 hour and 37 minute advantage over the Spaniard. 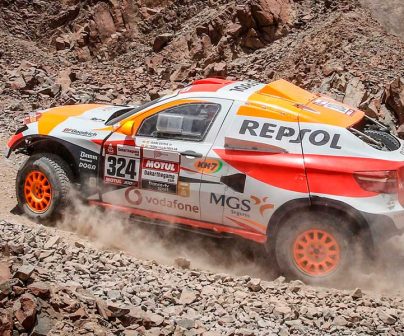 Isidre Esteve reaches the last stage just outside the top 20

"Honestly, finishing first or last is the least important thing, the main thing is that we have been more competitive than ever, despite it not being reflected in the final ranking. The feelings have been very good and we are encouraged to continue working to improve next year with an even stronger project,” acknowledged the driver from Oliana.

In the moments of celebration after, Isidre Esteve wanted to send sincere and emotional words of thanks to “everyone who made this project possible; of course to the sponsors, but above all, to the members of the Repsol Rally Team, a different type of team, motivated by excitement.”