Isidre Esteve is one day away from completing his third consecutive Dakar. The Repsol Rally Team driver has led a brilliant second week of competition coinciding with the toughest part of the course. On Wednesday, the driver from Oliana finished the penultimate stage in 24th position and is in 21st place in the provisional overall ranking.

The day, starting and finishing in Pisco, consisted of a complicated special of 313 kilometres, again with the dunes as the main obstacle. Isidre Esteve and his co-driver Txema Villalobos put in a great performance at the wheel of their prototype BV6, which allowed them to reach waypoint 5 with the 19th quickest time.

"It was a very beautiful stage, with many dunes and beautiful areas that we drove through at a high speed until 30 kilometres from the end. There was a waypoint off the map and, when we realized this, we had already descended the dune. We had to turn around and, when we tried to reach it, we got stuck twice. We would have lost 45 minutes, but we were not the only ones, since that area seemed like a minefield with vehicles stranded everywhere”, explained Isidre Esteve.

Despite this unexpected end, the Repsol Rally Team driver made a positive assessment of the day: "We are very happy to overcome such a complicated stage with all the waypoints reached and always on the right path. It was a good example of how well Txema Villalobos has been navigating this whole Dakar. It is a shame we had problems at the end, in an area where the sand was very soft”.

But it was nothing compared to the scary moment on stage 6 when a buggy fell on him and he lost two hours being rescued, thanks to the help of the KH-7 Epsilon Team who, unfortunately, yesterday retired from the race. "I feel for Jordi Juvanteny, José Luis Criado, and Xavi Domènech who had to retire because they are always willing to help everyone and they deserved to finish. I wish them all the best”, said Isidre Esteve after hearing the news. 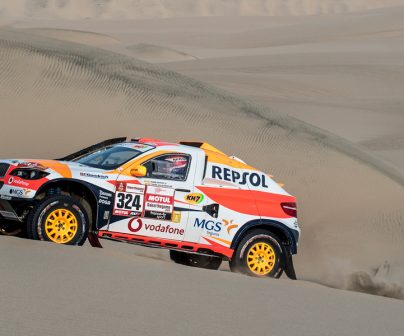 The driver from Llerida completed the penultimate day in 5 hours, 46 minutes, and 9 seconds. Overall, he is in 21st place, held back by a 40-minute penalty that he received yesterday after skipping a waypoint near the beach. With that extra time, Isidre Esteve is 1 hour and 10 minutes off a top 20 spot which closes the gap on the Hungarian Balazs Szalay.

Tomorrow, the last stage of the 2019 Dakar finishing in Lima, with 112 kilometres against the clock that will decide the final positions. "We will go out to be as competitive as possible. It won't be an easy day because if anything has characterized this edition of the Dakar, it is the fact that there has been no let up. Technically it is a very demanding race and you can not relax for a moment”, summed up the Repsol Rally Team driver.