Marc Márquez closed the season with another victory, completing a practically perfect year in which he took twelve wins and six second positions.

Jorge Lorenzo said goodbye to the MotoGP World Championship with a fightback from eighteenth position to thirteenth at the chequered flag. 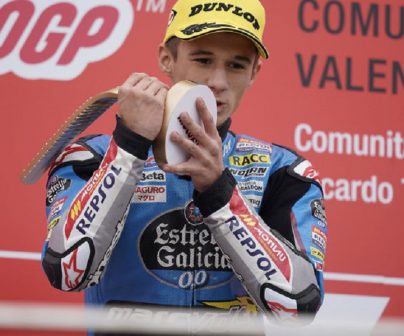 A perfect end to a perfect season with the victory! I put a little extra pressure on myself with the gold helmet, so I needed to be extra smart! We did exactly what we wanted to do and won the Team Championship, taking the Triple Crown in this amazing season. Always the Riders Championship is the first objective, but I was happy to help win the Team Championship, not just for them but also for Jorge who has been a great champion, a hard rival and a great teammate. It will be difficult to improve on this year because we rode in a perfect way.

Today was a special day. On the grid I had a very different feeling to all my other races and certainly in the opening laps I was more cautious than other races because the conditions were very difficult and I wanted to finish my last race. I focused mostly on myself in the race and I am pleased to end with some points certainly. It is great to help the Repsol Honda Team win the Teams Championship after an unbelievable season from Marc. I want to say thank you to all of Honda as they have treated me with the utmost respect and professionalism. I wish them all the best for the future.