Home / MotoGP / Sebas Porto: “The amount of riders with the chance to win races is bigger every year”

The MotoGP round at Termas de Río Hondo a fortnight ago brought some familiar faces to the paddock. One such person was the Argentinian rider with the most victories in the World Championship, and 250cc runner-up in 2004: Sebas Porto. He gave his assessment of the season so far, following the first two rounds of the 2018 campaign and in the run-up to the Grand Prix of The Americas.

HOW IS LIFE AS A FORMER WORLD CHAMPIONSHIP RIDER?
“Very good. I’m enjoying my homeland of Argentina; I’m relaxed and trying to do many of the things that I like. Motorcycle racing is still part of my life: I have my team in Argentina and I appear on television for the World Superbikes Championship. In short, I am keeping myself entertained, but at the same time, I try to have a quiet life with my family.”

WHAT DO THE FANS SAY TO YOU WHEN THEY RECOGNISE YOU?
“The fans are amazing. I was always a very open person and nice to people. I was always clear that you have to know how to respect people and be aware that there are many people behind you who follow you. When things don’t go well on the track, sometimes you have to put it to one side and meet the people that are there waiting for a photo or autograph. The Argentinian fans are very passionate. In the same way as football, motorcycle racing has that fanaticism. Although I have been retired for years now and there are many people who never saw me ride, there is that affection and recognition for being the only Argentinean who has triumphed in the sport. That is special and when you go to a Grand Prix and see people who still love you, you want to be active again. It was very special for me.”

HAVE YOU MISSED A MOTOGP RACE ON TELEVISION IN RECENT YEARS?
“I haven’t missed any of them. I’m just as excited about it as when I was active. I’m sure I’ve missed a race during these twelve years due to other commitments, but I have never missed any because I didn’t want to watch. It’s impossible for me to get away from that world; it’s something that belonged to my life for twelve years.”

AT THE ARGENTINIAN GP WE SAW YOU TALKING TO YOUR MANY FRIENDS IN THE PADDOCK. YOU SPOKE FOR A LONG TIME WITH DANI PEDROSA, ONE OF YOUR MAIN RIVALS FOR THE 250CC TITLE BACK IN THE DAY. WERE YOU REMEMBERING OLD TIMES?
“Yes, I was walking around all the boxes and I met many people again. Some have changed, but others have been in the World Championship for many years. Almost all my mechanics and my crew are still active. It’s special, because just like they recognise me, I also have a lot of respect for them. They have been important people for me. Working with race bikes implies having a lot of confidence in your team and your mechanics. I also spoke with friends, with Jorge Lorenzo, Dani, Valentino and many other riders. We all know the relationship I have with Dani. He was my rival but also a great friend. We were talking during the weekend and it was very special and emotional. We talked about everything, and there are always jokes about the time we spent competing in 250cc.”

HOW DO YOU SEE THE SEASON SO FAR?
“It’s very attractive. We have had two races with different winners and everything is very open. The amount of riders with the chance to win a race increases every year. The mix of veterans with young riders has made that potential grow, although -of course- there are six or seven firm candidates. From what we saw in Qatar, it seemed that Marc Márquez and Andrea Dovizioso were going to continue being the kings of MotoGP. For different reasons they didn’t repeat that Argentina, but there was a very strong Álex Rins and Cal Crutchlow had a great race. Beyond all the circumstances on raceday, Marc was the dominant force of the entire weekend. Dani also seemed to be doing very well, and it’s a pity about that crash he had on the first lap.” 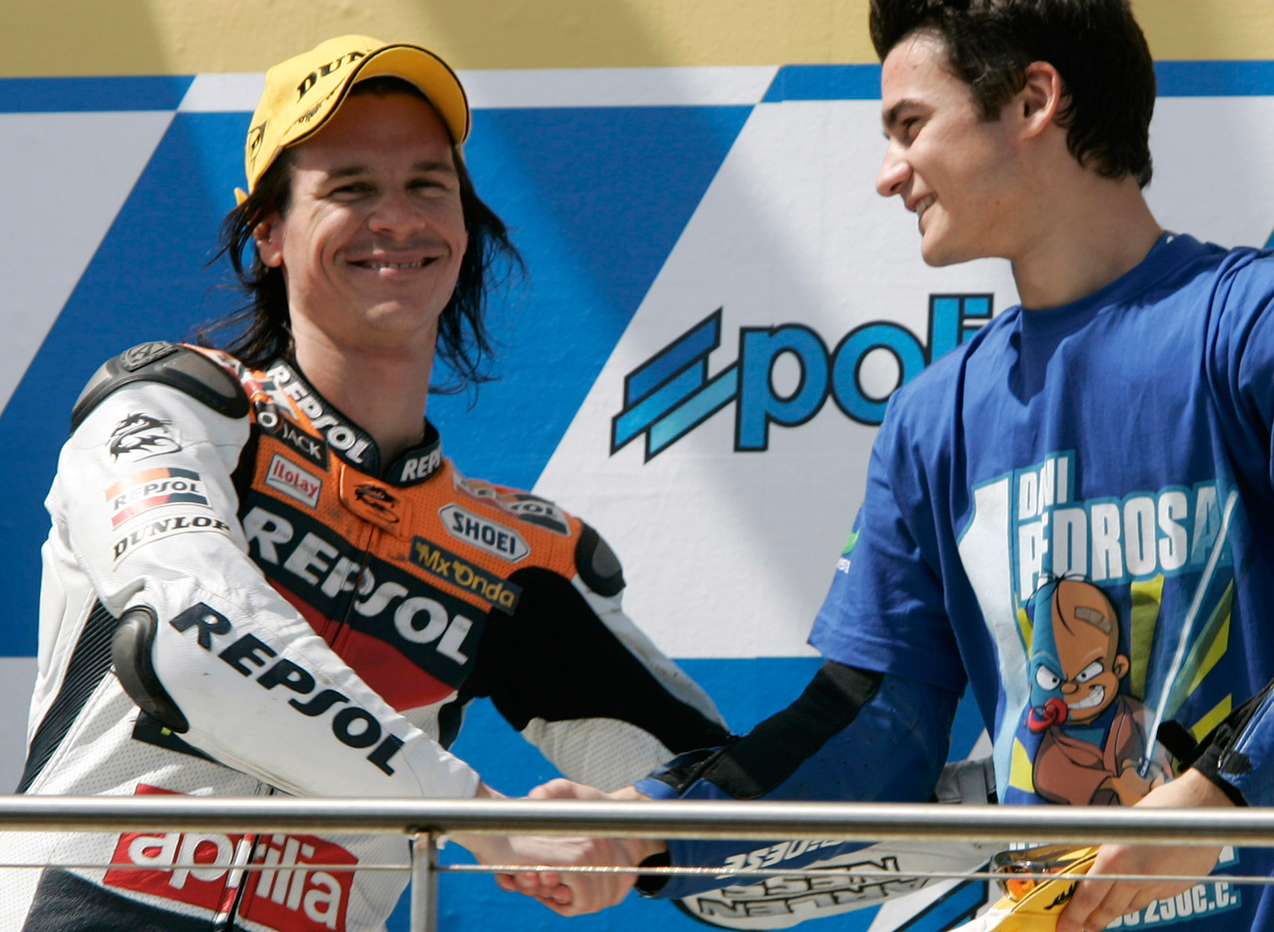 DO YOU THINK THERE ARE MANY DIFFERENCES RIGHT NOW BETWEEN THE DIFFERENT BIKES?
“There are always differences and it has to be like that. That’s why there are factory bikes and privateer bikes. However, it is not the same as what happened in my time. We have seen semi-factory bikes working very well. In fact, the other day Crutchlow won the race. Although his bike is almost a factory Honda, he is on a privateer team. Miller also took pole… There are many teams that are strong, not to mention Zarco, who finished ahead of the official Yamahas in both races so far. The difference is not so great and the rider is what makes the difference.”

THE MOTOGP WORLD CHAMPIONSHIP IS HEADING TO COTA THIS WEEKEND. DO YOU KNOW THE TRACK? WHAT DO YOU THINK ABOUT IT?
I’m not familiar with it. I wasn’t lucky enough to ride there during my careers, so I have only seen it on television. It’s an F1 style track, very spectacular track with a long straight and lots of corners. In short, it has a bit of everything. The first sector is very fast, with very interesting changes of direction. It has braking points that are practically corners, where you have to completely stop the motorcycle and accelerate again. Marc goes very well at this circuit because of his style of riding and is going to be a serious candidate again this year.”

DO YOU THINK MARC MÁRQUEZ CAN ACHIEVE HIS SIXTH CONSECUTIVE WIN AT AUSTIN?
“I know how difficult it is to stay in shape, physically and mentally, over the years. But I think that Marc is boosted by many factors: He is very fast and has the same hunger as when he started out. And he’s still young! He has won a lot in a short time, but he is practically in his prime. He has plenty more years in him and, at the same time, has already won a lot. ”

WHO WILL BE HIS MAIN RIVALS AT THIS RACE?
“I would have to analyse it in a little more detail but, in theory, I think Zarco is in good form. It will be necessary to see how he and the bike adapt to the track, since it is not a favourable circuit for the Yamaha. Crutchlow comes into the race after winning and is going to be very motivated for this GP. Then there’s Valentino, and we’re also waiting to see if Maverick makes the step up. Rins also comes to the USA after a podium. Austin is going to be very open but, as a five-time winner, Marc is going to be the favourite there.”

CAN YOU GIVE US A PREDICTION AS TO WHO WILL WIN THE TITLE?
“There is a huge way to go until the end of the season and we know from following the World Championship for so long that anything can happen. We know there are six or seven riders able to fight for the title. Without a doubt, the main candidates are Marc and Dani -if ​​he recovers quickly- as well as Valentino, Zarco and Dovi, of course. They will fight for the title and we will see how the season develops.”