Home / MotoGP / “Flag to Flag” races, discover all their secrets

Rain has always been an uncomfortable element in the Motorcycling World Championship. Not all riders feel comfortable on the wet asphalt, and sometimes, when the water unexpectedly bursts in, it may completely change the course of a race. Since forever, wet races have been accepted as more open events, where the favorites risk less and where the underdogs usually go for broke in the pursuit of success. 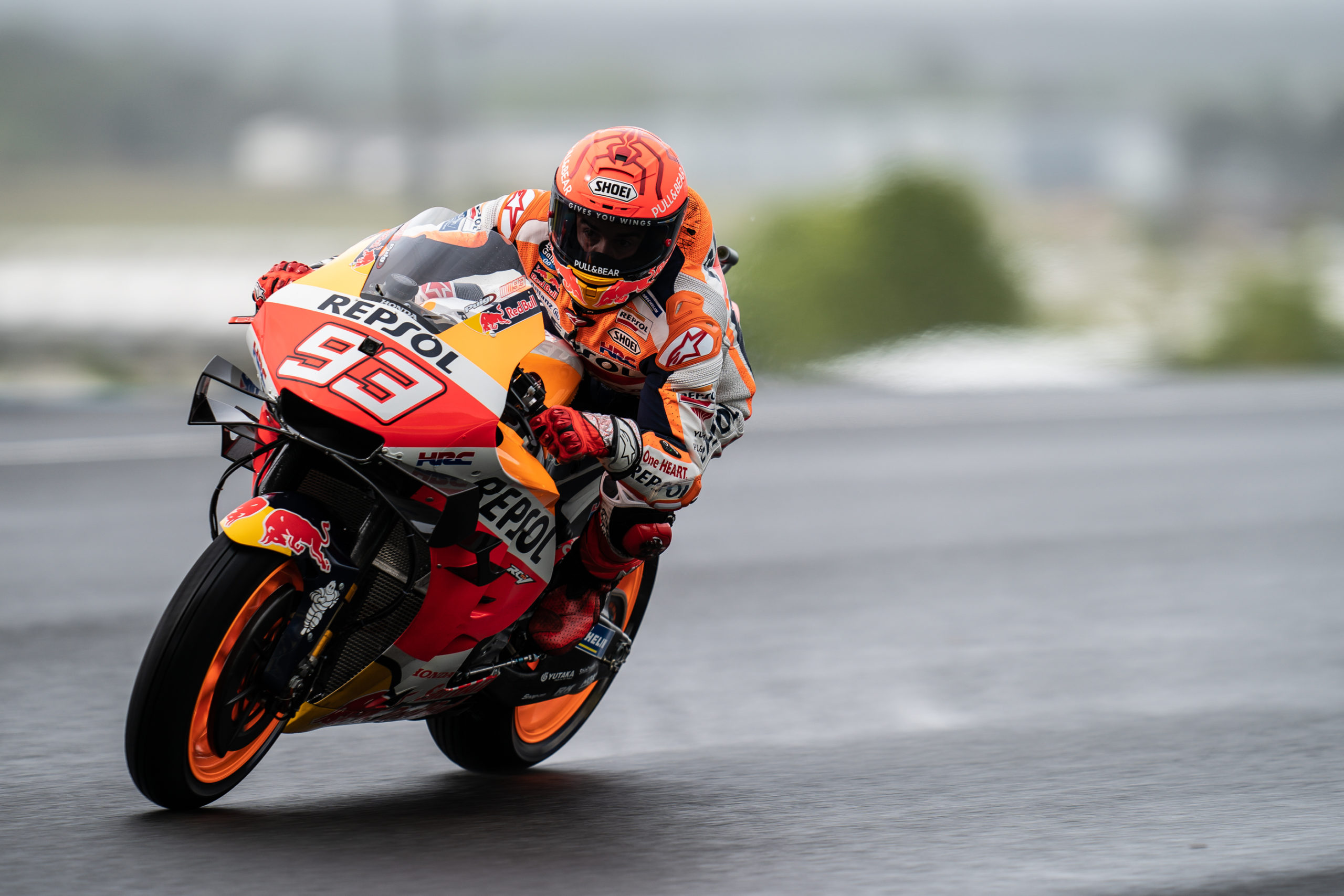 The arrival of rain hasn't always been understood in the same way in all championships. In Europe, i.e., in the World Championship, it was accepted that races had to continue without major setbacks. However, in the United States, for a long time, when it rained the race wasn’t held. For this reason, because of their lack of habit to ride on wet asphalt, the North American riders weren't good specialists in wet conditions. This unfamiliarity with water was made up for by their talent on slippery surfaces, acquired in dirt track races.

What happened previously in races when it rained?

Generally, when it rained, races were stopped. The time to interrupt it was usually a matter of controversy, because sometimes the race director, in the past, didn’t have enough reaction capacity. You also have to understand that in the old circuits, without CCTV, in urban or semi-urban routes with different types of asphalt, some so long that in one area it rained and in others it didn’t, it was complicated to make the appropriate decision at the right time.

There were even cases where even a monumental storm did not change the race director's attitude. The 1982 Finland Grand Prix, held in the urban circuit of Imatra, took place completely under the rain. The riders accepted the situation, but the storm intensified during the 350cc race until the point that Anton Mang, who was leading the event, stopped at the finish line to ask the race director to suspend it. He refused and Mang had no other choice but to resume the race, complete the regulatory distance, and win.

Over time, it was agreed that when the arrival of rain became a dangerous circumstance, it would be the riders themselves who could stop the race by lifting their hand. They weren't always paid attention to, but it became an established sign that became commonplace. 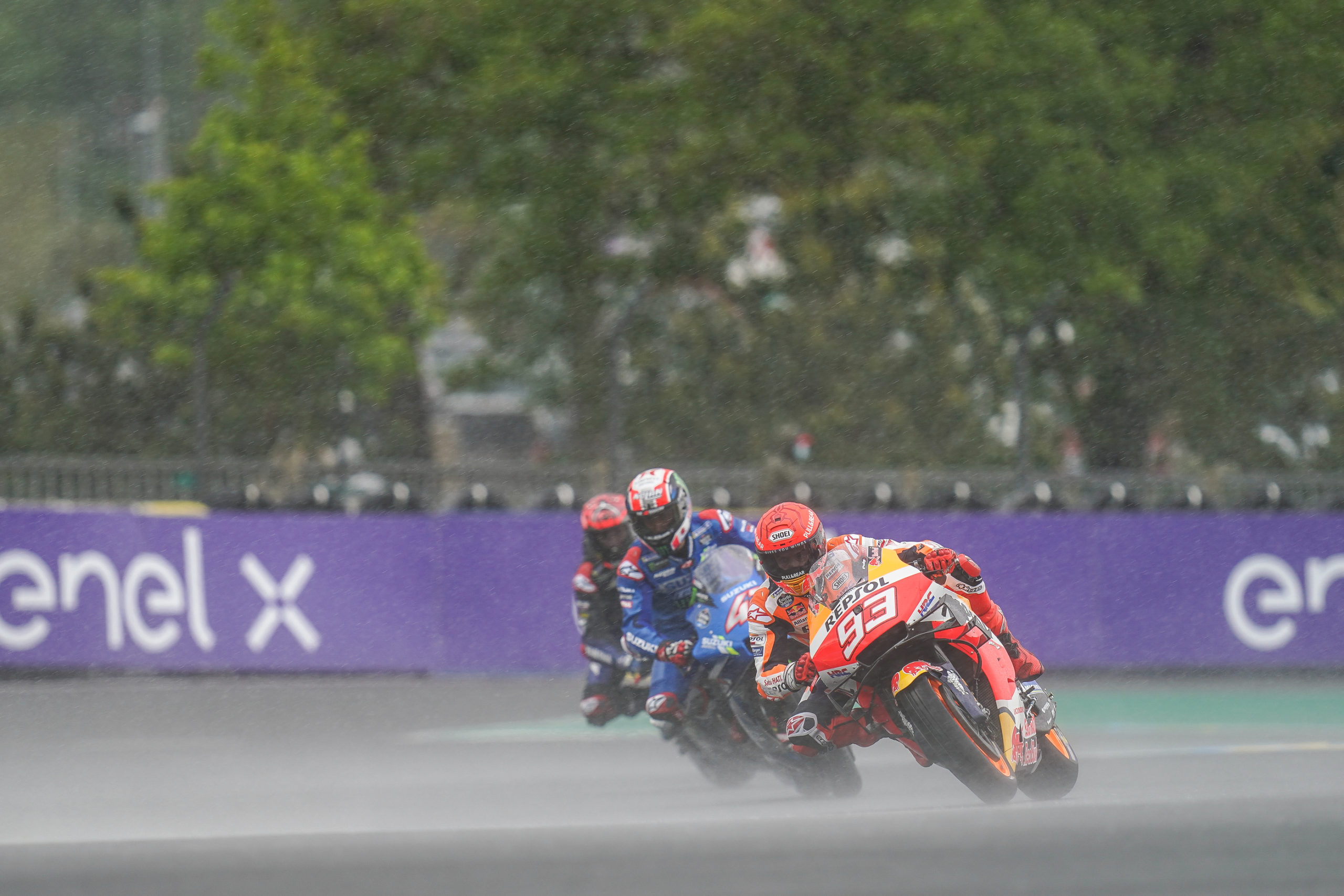 When the race started with rain, everyone accepted that they had to ride in these conditions, there was no discussion about it. The rain tires were mounted, also known as “hairy” –because when the tire was taken out of the machine where it was forged, there were always small hairs sticking out of the tread–, the grooves of which helped to dislodge the water. But when it started to rain in the middle of a race that was taking place in dry conditions, the competition had to be stopped.

This decision started to be made in the 1980s. There were two possible courses of action: if the race couldn’t be restarted, it was ended, and if 50% of the race distance hadn’t been surpassed, only half of the points were awarded. If the race could be restarted, the number of laps necessary to complete the race distance was covered, and the times of the two races were added to establish the ranking. It was possible that a driver who had not been leading the race at any point in the race could be declared the winner on aggregate times. Crazy, right?

It was worse what happened in Spa in 1989. The race, which was due to take place over a distance of 17 laps, started in dry conditions, but it started to rain in the sixth lap and was stopped. It was restarted, and again the rain caused a second interruption on the fourth lap of the second race. A third race took place, now definitely in wet conditions, until the 17 laps were completed.

However, the results of this third race were annulled as the regulation established that a race could only start twice. The race director knew it, but decided to start again because of the threat of fans storming the paddock in protest at the suspension of the race... Incredible. Leaving aside the useless risk the riders took, the ranking changed by quite a few positions. For example, John Kocinski, in his 500cc debut, went from third after the three races, to finishing fifth and, as 50% of the race distance wasn’t surpassed, only half of the points were awarded.

The aggregate times continued to apply until the MotoGP times. Then it was realized that it wasn’t a fair or realistic situation, because often in the second race, the rider who was first in the ranking in the first race, simply controlled the gap to take the win, and it was not always the first to receive the checkered flag at the finish line that was the winner. It was a strange situation that led to confusion. This happened to Carlos Checa in the 2000 Spanish Grand Prix, where he finished first in the second race, but Kenny Roberts Junior was declared the winner, because of the aggregate times of the two parts.

The regulation was modified, deciding that if a race was interrupted, it would restart over the remaining distance until the total number of race laps was completed, and that only the result of that second race would count for the ranking, awarding all the points.

It soon became clear that in certain circumstances, this was not an appropriate solution. The 2004 Italian Grand Prix race had to be suspended in lap 17 of the 23 scheduled due to rain. It was restarted for a race of only 8 laps, the remaining laps to be completed. It was a strange and dangerous race, with sprint racing and wet patches at some points of the Mugello circuit.

The championship managers continued to look for a fair formula that allowed the race to take place normally despite the changing weather conditions. So, in 2005, the “Flag to Flag” regulation was approved (i.e. from the start flag –start light– to the checkered flag), which allowed the race not to be interrupted despite the appearance of rain. 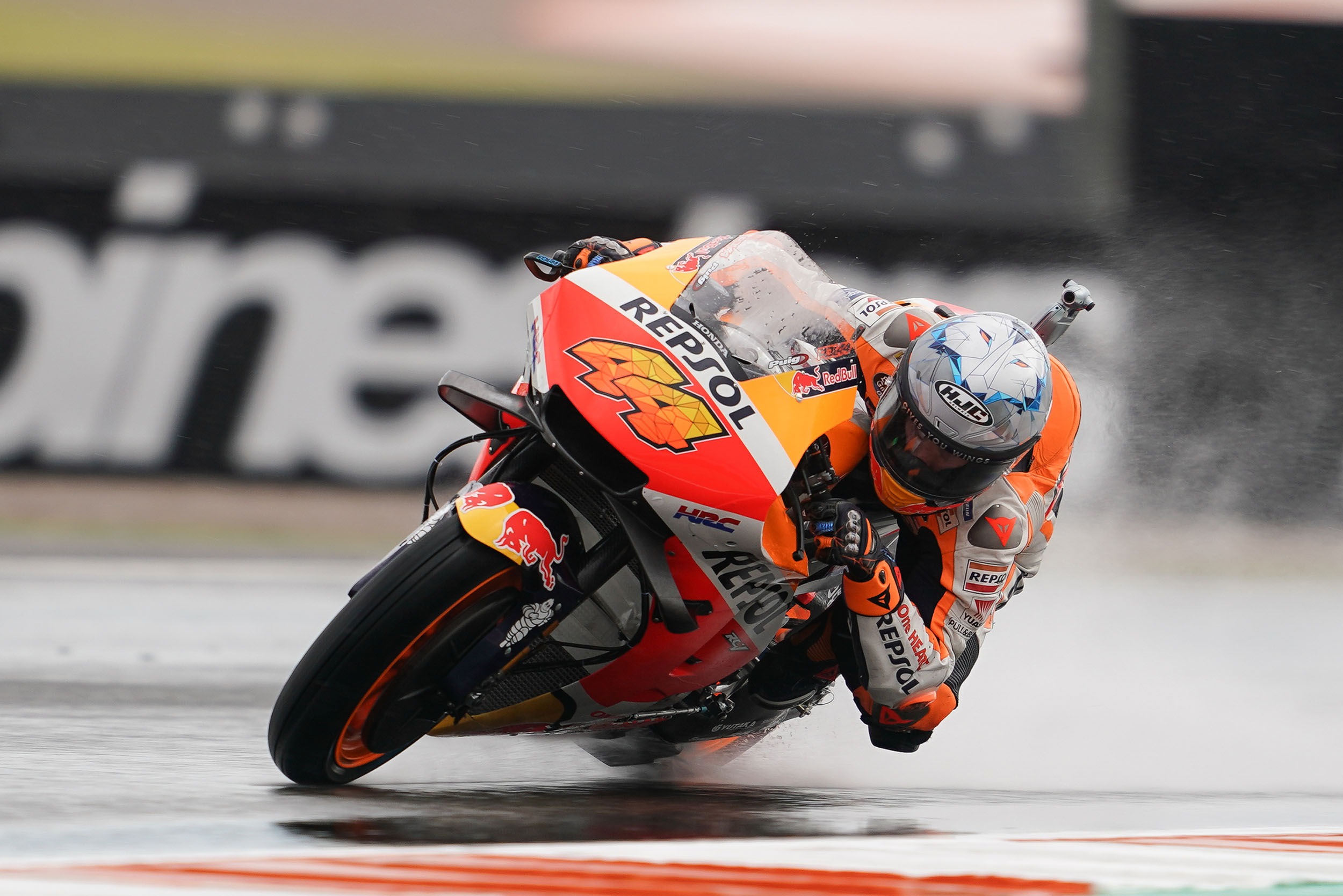 This system is only applied to MotoGP, because it is the only category that has two bikes per rider; although when it came into effect, 125cc and 250cc riders still had two units each in their garage, but it was considered that for safety reasons it would only be implemented in MotoGP.

The flag to flag procedure is very simple. When it starts to rain, the track marshals show the white flag with a red cross to warn of the presence of water, and when the Race Direction considers that the asphalt conditions are no longer in line with the so-called “Dry Race”, the white flag is shown, which is the authorization to be able to enter pits to change bikes. Teams have the second bike prepared in their garage with tuning and rain tires, and riders, at their discretion, enter when they consider necessary, and the race takes place without more alterations and complying with the original distance that had been set.

The first occasion that this new system was applied was in the 2006 French Grand Prix in Le Mans, which Marco Melandri won. Since then, this procedure has been applied on 20 occasions, but this has not prevented extreme weather conditions from forcing the suspension of the race on occasion, like what happened in Sepang, in 2012, when it had to be stopped on the 14th lap and there was no chance of it restarting, or in Assen 2016, when despite flag to flag being activated, the rain forced the race to be stopped and then a new start, over a shorter race distance, for the 12 laps remaining for its conclusion. 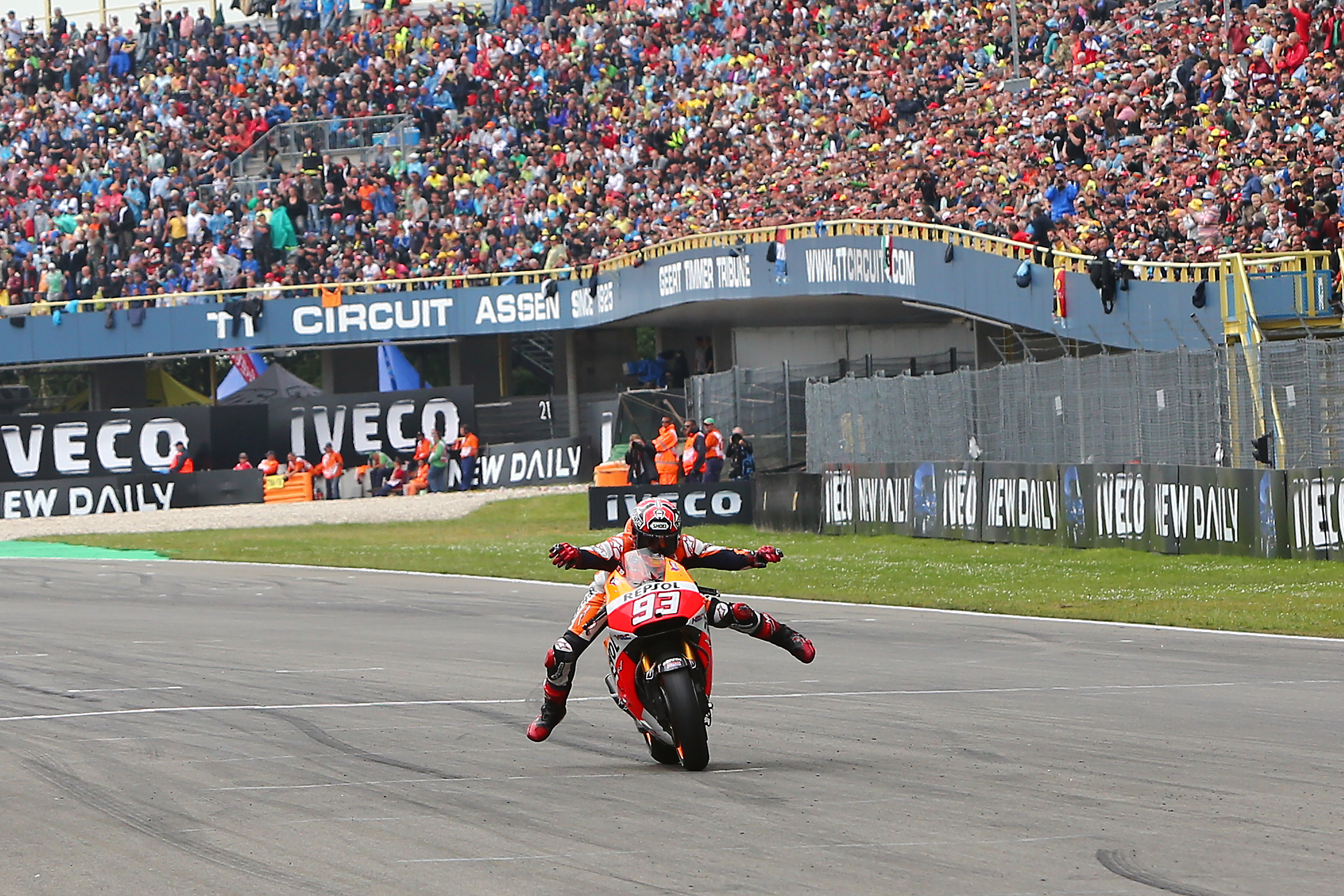 One of the indisputable masters of flag to flag races is Marc Márquez, who has won this type of event on five occasions: Assen 2014, Misano 2015, Argentina and Sachsenring 2016, and in Brno 2017.