The premier class rookie started eleventh on the grid and climbed nine positions, to finish second after challenging for the win. With this podium, Álex Márquez moves level on points with Brad Binder, the other rookie in the class.

He remains one of only two riders to have completed every race this season, along with Takaaki Nakagami.

Following the Aragon Grand Prix, Álex Márquez is 12th in the standings with 67 points. Stefan Bradl remains 21st with 8 points. 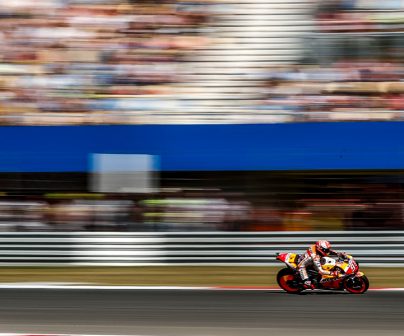 The unseen speeds of MotoGP

“Honestly I didn’t expect to get a podium from starting in 11th but I was able to recover well. I found myself in a good position, so we did what we could! I knew I could take quite good care of my tyres for the end of the race. I enjoyed every overtake, but I was really on the limit with the front tyre. Even so, it’s great to be back on the podium and to do it in the dry, we really showed our potential all weekend. We still need to work on Qualifying, but we can enjoy what we achieved today. I want to again say thank you to the Repsol Honda Team for believing in me, supporting me, guiding with me and never giving up. They gave me an amazing bike and I enjoyed the whole race.”

“It was an exciting race, starting last was a disaster but we were able to make up some positions and have some good fights. We have been working with the geometry of the bike and we are improving, step by step. Our pace in Warm Up was not so bad but unfortunately it didn’t lead to a better result in terms of position. We’re making progress, so coming back next week is a positive thing to let us try and improve again. Congratulations again to Alex for another great podium, the Repsol Honda Team is doing a great job.”