In 1963, Lancia launched the Fulvia onto the market, a car that was going to substitute the previous model, the Appia. It’s a lightweight Berlina with front wheel drive and a small 1100 cc engine that reached a horsepower of just 60 CV. Its engine, with narrow V-shaped banks, had four cylinders and eight valves in a double camshaft. This system was fuelled by a double carburettor and had a liquid cooling system.

In 1965, Lancia presented the coupé version of this vehicle, which was a bit shorter and equipped with a much more powerful 1216 cc, 80 CV engine. Soon after, the High Fidelity—or HF—version came onto the market, which had a 1298 cc motor that exceeded 100 CV at 6500 Rpm. It also had a reinforced chassis. The body of the Fulvia HF was lighter, with the entire car weighing little more than 800 kg. It had disc brakes on all four wheels and a 4-speed gearbox.

The last model of the Fulvia on the streets had a 1548 cc motor that allowed it to reach 130 CV and a 5-speed gearbox.

The Repsol team had various Lancia cars in 1969, although it only competed in a few races with them. It was the first car to bear the classic R, driven by Alberto Ruiz Giménez and Eladio Doncel; later, Manuel Lencina would join this list. This car has become the precursor of Repsol's extensive experience in competition.

In 1971, Ford launched the RS 2600 version of the coupé that it had been selling since 1969. It was hoped that this sports car, with its long bonnet and rear wheel drive, would become the European Mustang, but its engine didn’t exactly help.

The RS had notably improved performance. It had a V-shaped motor with six cylinders, 12 valves, and 2637 cc with mechanical injection. It had a power of 150 CV, reaching 5600 Rpm and 224 Nm of torque at 3500 Rpm. The motor transmitted the movement of the rear axle through a 4-speed gearbox. It braked using solid front disc and rear drum brakes. Its total weight was around 1200 kg.

Repsol competed with a Group 2 version in 1971 and 1972. This model performed much better than the street version. Its engine could achieve around 300 CV and its gearbox was substituted for a 5-speed ZF. It also had a self-locking differential and the brakes were replaced with front vented and solid rear disc brakes. The weight was also reduced by using fibre panels and eliminating unessential elements, managing to drop its weight to 900 Kg.

This car achieved victories and podiums for Repsol in resistance and touring car races.

In 1966, BMW produced the 02 series, which laid the foundations for the current 3 series. The standard 2002 Ti model had a 4-cylinder, in-line, carburetted engine with a 1990 cc engine displacement. This motor achieved nearly 120 CV at 5500 Rpm and around 160 Nm of torque, transmitted in its entirety to the rear axle through a 4-speed gearbox. The weight of the vehicle was less than a tonne and was controlled through a front disc and rear drum brake system that was common at the time.

The model was affordable and light, which attracted the attention of trainers such as the German ALPINA company. They decided to get to work with this model, creating an economical vehicle that performed like a sports car.

The version that got to competition had a motor that was nearly twice as powerful, reaching 200 CV, exceeding the magic number of 100 CV per litre of displacement. To do so, they completely modified the aluminium cylinder head, changing carburettors, valves, springs, and camshaft, as well as improving its manifolds. They also replaced the pistons for forged pieces and the conrods for a lighter version. With all of these changes, they managed to get the engine to reach more than 7500 Rpm.

With an engine like that, it’s no surprise that the version that brandished the Repsol R in 1970 achieved victories in rally circuits and mountain climbs. 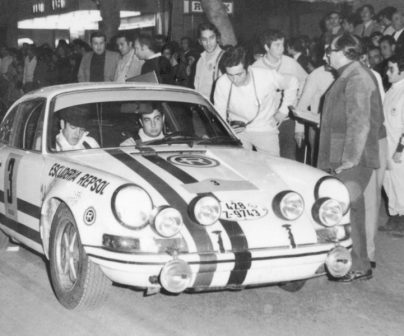