We'll try to go step by step because solving this riddle is a feat worthy of Toni Bou!

Software developers sometimes hide messages called "Easter eggs" in programs or video games. They don't usually interfere with the user experience, but if you seek them out you can find all sorts of hidden surprises.

The "Trials Evolution" video game is in a league of its own when it comes to Easter eggs due to the vast complexity of the secrets they hold...We'll try to go step by step because solving this riddle is a feat worthy of Toni Bou!

The first step of this strange puzzle begins in the simplest way possible. Simple letters appear one by one on different signs throughout the game. Aside from the difficulty of jotting down letters as you jump through the air on a virtual motorcycle, once you put all the letters together you realise that the message behind these signs is...completely unintelligible!

A user called MurdocLoch from one of the Redlynx forums was the one who was able to crack this mystery using a combination of decryption methods and his own knowledge of the game. He put in a tremendous effort, but...it wasn't over yet because the resulting message was just as puzzling.

An experienced gamer will recognize these phrases as clear instructions for a cheat code to use in the game. Plus, if we know that "Nature calls" is one of the Trial tracks in the game and that "Scorpion" is one of the bikes, the next step is crystal clear. We'll show you what happens if you turn off the music, ride on the right track, with the specific bike, land the jump, and use the cheat code on the rock. Watch the video, and when you get to second 33, crank up the volume!

A song? That's where this all ends? Well, no. We've only gone one step further down the rabbit hole because the song lyrics are another riddle...

"Wake up and listen, the secrets are hidden in the brighter tones. Your ears may not catch them, you might have to transform it into a visible form. Be prepared to find a strange encoded line. Decoding must be applied. Now shivers are running down your spine as a treasure is waiting for you."

If you pay very close attention, you can hear some beeps that do not correspond with the melody of the song. Using spectral analysis, you can see that if you read the beeps using Morse code...wow! So have we finally solved the mystery? Well, not yet...the Morse code revealed yet another puzzle.

The Morse code spelled out a web address, but when you visited the website, there was only a blank page. However, weeks after the website was discovered, images related to great scientific minds began to appear, one each day. 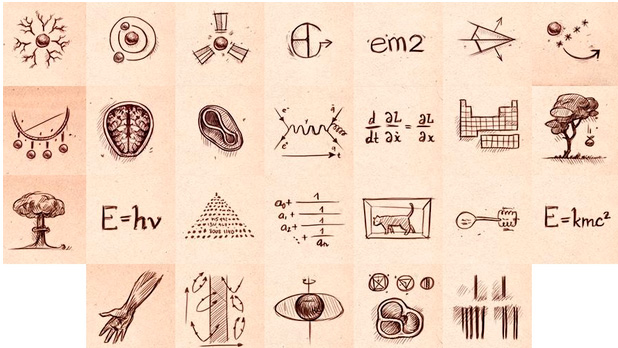 On the 26th day (that number reminds me of someone...), instead of an image, what appeared was a question made from the images. You can see the image below. 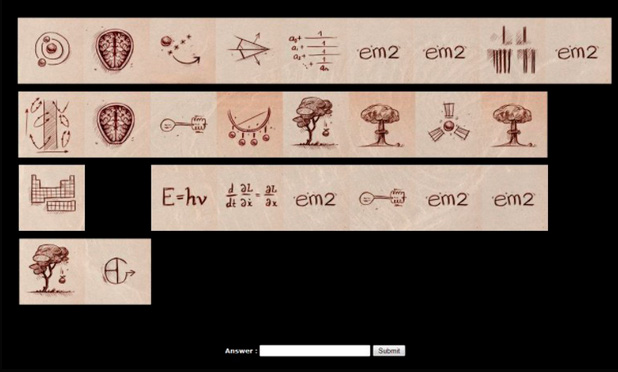 When correct answer was entered, an image appeared showing coordinates of various locations, which you can see below. 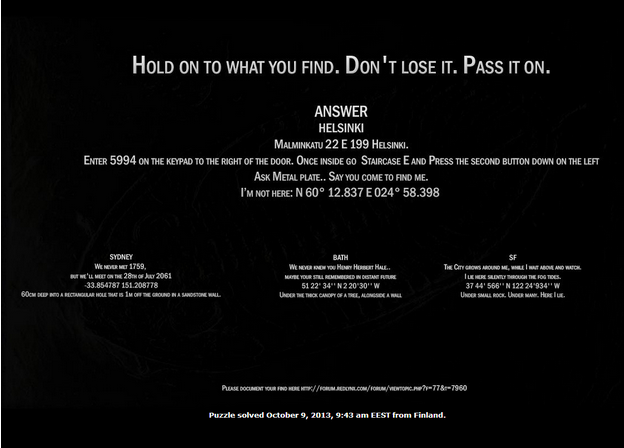 The four locations that appeared were Helsinki (Finland), Sydney (Australia), Bath (England), and San Francisco (US). When the fans saw this, they raced to find what had been hidden at these locations.

What did they find? Small boxes with a key and some metal plaques. The plaques clearly read "Midday in Year 2113, 1st Sat in Aug One of Five keys will open the box Underneath the Eiffel Tower." Five keys? But there are only four locations...the video game's creator has announced that he's made careful arrangements so that in that year, on that day, there will be a box under the Eiffel tower. 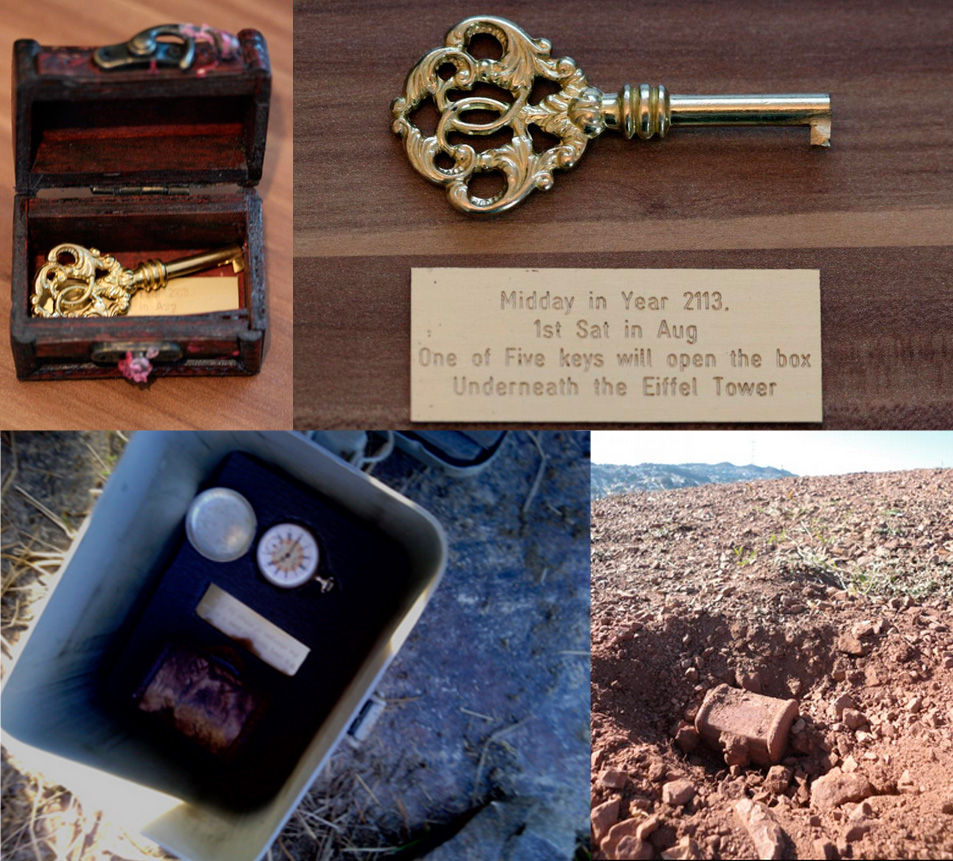 And that's how the mystery ends. We'll have to wait almost 100 years to solve it. None of us will be alive to see it, but what a great time we've had solving out all the steps of the mystery! And all from a game about motorbikes, a Trial game that contains the world's greatest mystery.