With summer and the holiday season well underway, many of us will be thinking about preparing to embark on a motorcycle trip through our exceptional and varied geography. In this period, warm days are drawing near, so it is recommended to choose a route which prioritises mountains and forests so that the trip is more pleasant, as well as being more appealing to the eye. And if there is a road trip that meets all of these requirements to enjoy our motorcycle and wonders of our geography to the maximum, it is none other than the Trans Pyrenees route.

The Pyrenees are a mountain range located at the north of the Iberian Peninsula and which serves as a natural border between Spain and France. It extends nearly 500 kilometres counting from the Cap de Creus, in Girona, to its connection with the Cantabrian Mountains, to the west of the province of Navarre. In this way, its mountainside occupies the Spanish autonomous communities of Catalunya, Aragon, and Navarre, and in the north occupies the French regions of Occitania and Nouvelle-Aquitaine. It also includes the Principality of Andorra, a small independent state that also has many points of tourist interest and very good mountain roads.

As is logical, the Trans Pyrenees route can be travelled in one direction or another, starting from any Gironan town to end up in Gipuzkoa, or the other way around, and with an itinerary where we can drive on Spanish and French roads, and also cross the aforementioned Principality.

In this case, we have chosen a Trans Pyrenees route of about 930 km that starts from Hondarribia, in Gipuzkoa, and arrives in the town of Roses, in the Alt Empordà of Girona. We have also preferred to limit it to journeys on asphalt so that it is more accessible and easier to complete for most people, and so that it can be done with motorcycles of all types, although the most appropriate is to do so with a trail motorcycle, whose driving comfort is superior on the tertiary roads that are plentiful when passing through the Pyrenees.

To carry out the Trans Pyrenees route on motorcycle, between two and four days are usually needed, although it is also true that there are motorcyclists who invest more time. It all depends if it is done alone or together with other motorcycles, or if there are one or two people on each motorcycle. It will also depend a lot on the motorcycle that we use and on its engine, and the type of roads that we choose.

With regards to accommodation and meals, there is a long list of possibilities. To sleep, we can choose among hotels, hostels, cottages, apartments, camp sites... And for meals, the variety is also extremely wide. We can equally opt to stop over in towns with several thousands of people, as well as small villages with hardly a hundred people. It will all depend on the budget that we have to carry out the trip and the type of adventure that we intend to experience.

On this occasion, we will invest three days, carrying out between 250 and 380 km on each one of them, doing so in company, so that it is easier to have a greater number of stories to liven up the route. During the trip, we will find other motorcyclists, the majority of them Spaniards, but also a few foreigners coming from different parts of Europe, which will mean an interesting contribution to the journey.

After enjoying a good dinner and overnight stay in Hondarribia, we will start our particular Trans Pyrenees route first thing in the morning with Jaca as the destination, the town in Huesca where we will spend the second night and which is 252 km away. 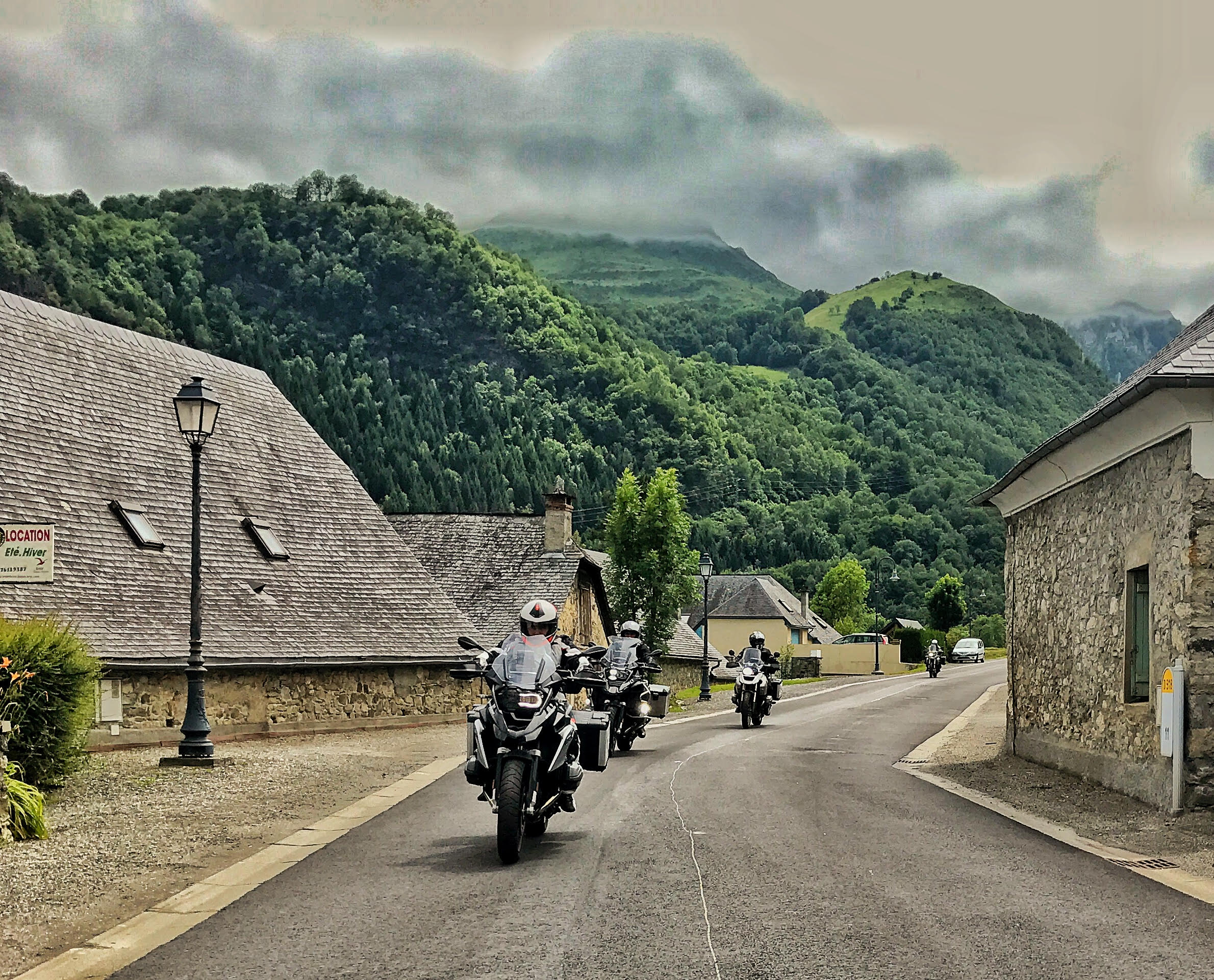 Just after starting the route, we cross to France through the border crossing town of Behobia and we head for Urrugne on the D810. There we take the D4 that passes through Ascain and which takes us to Ainhoa, where we take the D918 to San Juan Pie de Puerto, heading for the border crossing of Pekotxeta to enter Spain again. From there, we reach the Navarrese town of Roncesvalles on the N-135, where there are very good places to eat. After we head for Jaca, now in the province of Huesca, on the NA-140 that takes us to Isaba, to continue on the NA-137 which becomes the A-137 when entering Aragon, and the A-21. Once in Jaca, it is worthwhile visiting the Citadel and the Museum of Military Miniatures it houses.

After a necessary rest, we get on our bikes again in the morning to return to France on the A-136, but first passing through Biescas and Formigal. The destination is the town of Lourdes on the roads D934, D918, D35, and D 937, where we visit its famous sanctuary. 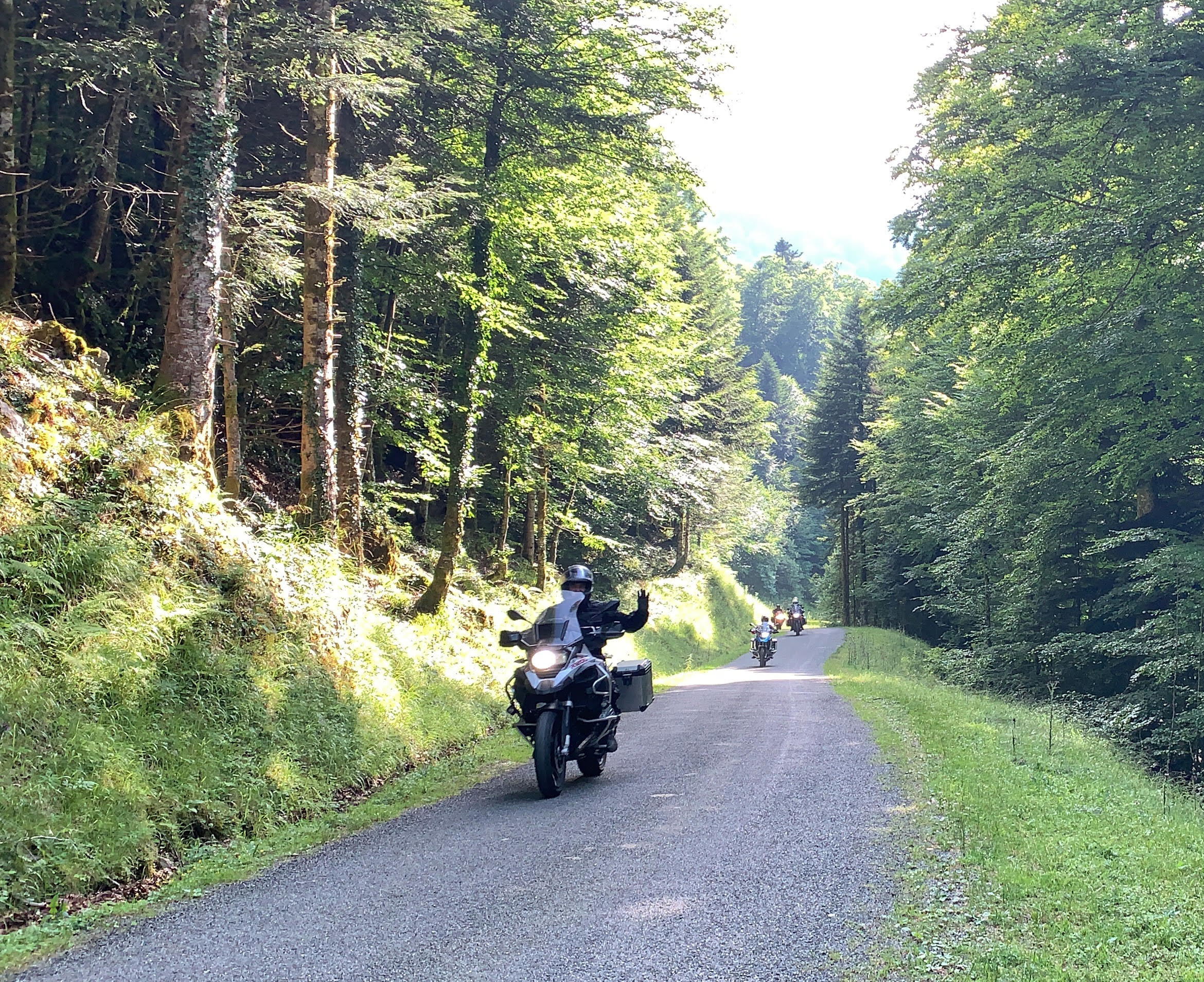 After some kilometres on the D821, we turn left to take the D918 that ascends to the mythical Col du Tourmalet, mountain pass famous in the Tour de France because of its toughness and history. Its pass is 2115 m above sea level and is a “must” to stop and take a photo alongside the Col sign and also enjoy the views. Once back down and passing through the town of Arreau, we head for Spain again via the “Col du Portillon”, which, along a very twisty N-230, takes us to Vielha, the capital of the spectacular Val d'Aran, after having travelled nearly 300 km.

One has to have a good breakfast, as the longest day awaits us, loaded with 381 km and curves. The route starts upwards on the C-28 and leads us to the Baqueira Beret ski resort and the Port de la Bonaigua. 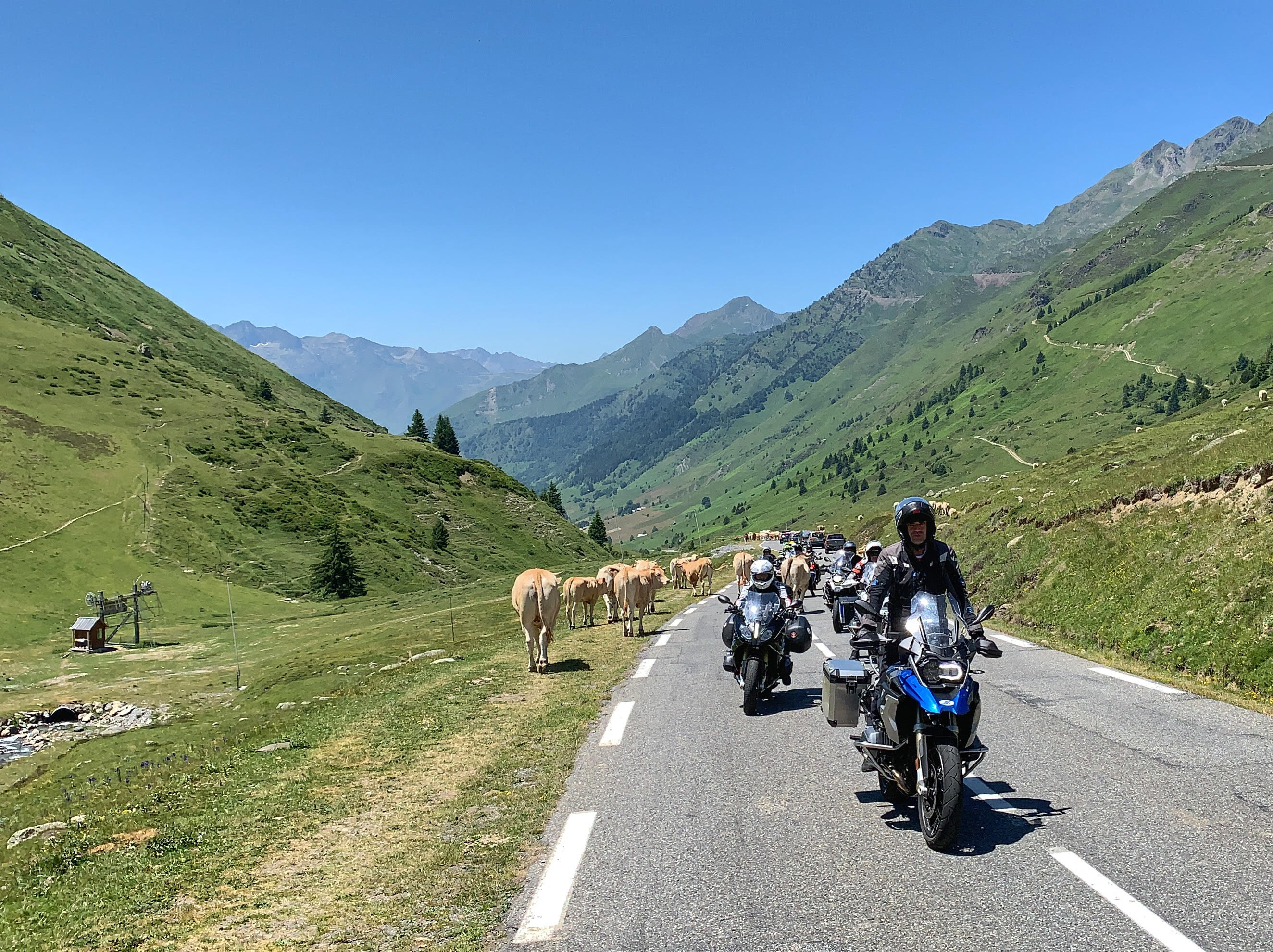 After a long descent we head towards La Seu d'Urgell on the C-13 and N-260. There we turn left towards Andorra la Vella, to, after buying some things and eating, go through the Principality, passing through El Pas de la Casa toward Spain again and specifically the town of Puigcerdà on the N20. There we take the N-260 that takes us to the Collada de Tosses, one of the most sought-after passes by Catalan motorists. We continue on the N-260 to Ripoll, a sharp and long descent, packed with all types of curves. From this point, the trip starts to gradually smooth out, and we continue on the N-260 to the city of Figueres, which we border to the south to take first the C-260 and then the GI-614 which takes us to Roses and its beautiful terraces on the beach. Here we end our Trans Pyrenees route after having travelled a total of around 930 km.