Home / Trial / Fifth round and fifth victory for Toni Bou

Toni Bou grows in strength as the event progresses at the Bilbao Exhibition Center, starting out with 8 penalties in the first round.

In the semifinal, the Repsol Honda Team rider concluded with 12 points to lead his group, a result that allowed him to contest the final against Adam Raga.

Bou led the way in the final from the second zone, claiming a fifth victory of the season with 9 points, compared to the 13 for his nearest rival.

After this latest triumph in Bilbao, Toni Bou extends his lead to 25 points in the series. He now has the chance to clinch the title at the next round of the season, which takes place on March 21st at Wiener Neustadt, Austria. 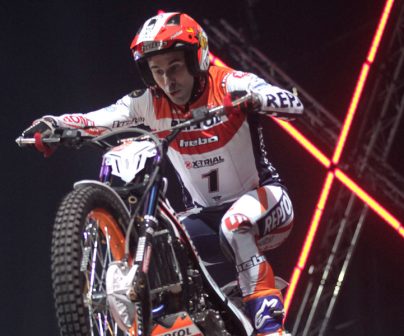 I am very happy with the victory. Again it has been a very tight trial with a very strong Adam Raga from the start. In the final, with a very high level, I was very aggressive from the start as I have had to open the sections. I was able to make a difference, and I had to take a few risks in section five, but finally I was able to salvage something in the very last section. It is a very important victory for the championship.