Bou led both the first round of the afternoon – only taking three penalty points – as well as the semi-final, despite a heavy crash in the fourth zone.

In the final round, the Repsol Honda Team rider made a mistake in the first zone, which conditioned him in a very close trial that was decided by one point in the last zone.

His team mate at the Repsol Honda Team, Takahisa Fujinami, took a step forward from his performance in Budapest, but was not able to get to the semi-final.

The third round of the championship will take place next February 16th at the Bizkaia Arena in Bilbao.

Today we have to be positive; we finished second and were very close to win. At the semi-final I suffered a hard crash, but it seems it will only be a scare and there is no serious injury, although I was scared thinking about what happened last year.

I made mistakes in the end, but I did pass the more complicated zones and I was able to fight until the last moment, which is the most important. I want to congratulate Adam Raga for his victory and also thank all the fans that filled the Palau Sant Jordi in my home race.

Today it was much better than in the last round in Budapest, but it wasn’t enough to pass into the second round. I finished a position ahead, but I failed in the second zone, due to an error I shouldn’t have made, and I couldn’t get into the semi-final.

I’m not happy with the result, although the feeling was much better. It’s a pity, because I’m happy to be once again in Barcelona, which is like my second home. Competing in front of this crowd is always very special. 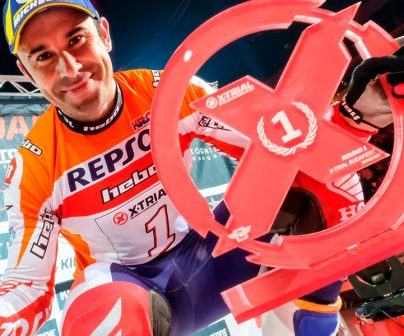 Toni Bou starts the X-Trial World Championship with a win