In less than 24 hours, Isidre Esteve experienced both sides of the Dakar. If yesterday saw his best performance, today he had his most troubling day. The Lérida-born driver's prototype almost rolled over but managed to stay on its side and, after returning to the race, had a breakdown that almost forced it to retire. Despite losing more than two hours, the Repsol Rally Team driver remains optimistic and remembers that “we haven't yet reached the mid-way point of the Dakar, there are many kilometres yet to complete and surely many more things will happen”.

Isidre Esteve and his co-pilot Txema Villalobos had a very close call towards the middle of the special, which happened between Al Ula and Ha’il. “We were in sixth gear going more than 120 km/h and we were almost rolled over, when we lost control of the car's rear end in a pothole. In the end we recovered it, but the BV6 ended up on its side, in amongst camel grass”, said the Oliana-born driver.

After getting his 4x4 back on its feet, with the help of the Dutchman Maik Willems and his Toyota Hilux, and checking that, apparently, the damages were minimal, the Repsol Rally Team managed to re-join the race 20 minutes later. “Luckily, everything was just a scare and no-one was injured”, he said relievedly.

But the problems did not end there, because about 50 kilometres later the prototype suffered a breakdown that, this time, really concerned them. “The alternator belt idler broke and we didn't have the spare part. Luckily Cristina Gutiérrez and Pablo Huete gave us a replacement. They did us a huge favour, because without their help we would not have been able to reach the end. I am very grateful to both them and the Bastion team. They are two examples of the true Dakar spirit”, highlighted the driver from Lérida.

After an hour of work on the road, Txema Villalobos managed to repair the breakdown. However, and after detecting an oil leak, Isidre Esteve chose to slow down considerably in the final 80 kilometres to preserve the mechanics and protect the BV6 engine.

Despite the mounting difficulties, the Repsol Rally Team managed to reach the finish line in 49th place, with a record of 6 hours, 8 minutes, and 42 seconds, 2 hours, 16 minutes, and 41 seconds behind the stage winner, Carlos Sainz. The lost time, added to a 40-minute penalty received yesterday for skipping a waypoint that, unfortunately, was not registered on his GPS, pushed them back to 36th place in the general standings, with an accumulated time of 25 and a half hours . 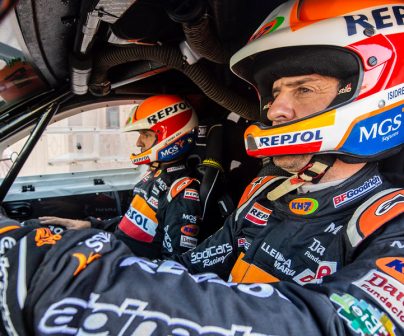 Isidre Esteve completes his best stage and places 22nd in the general...

“It's a real shame because today we were setting a really good pace and we could have finished with another good time. But that's the Dakar for you, and we have to keep fighting to get to the rest stage on Saturday. Nothing is certain, because the second week will be very different from the first and the differences will be greater”, predicted the Oliana-born driver.

Isidre Esteve will face the sixth stage with his unflinching spirit, between Ha’il and Riyadh, the last before the expected rest day. The racers must overcome one of the longest days of the 2020 Dakar, with a total of 830 kilometres, 477 timed, all on sand and off road.