The Repsol Rally Team once again shined in the Rallye du Maroc when he finished the third stage, which was the most difficult so far this year. Isidre Esteve passed the test with flying colours and crossed the finish line in a remarkable 15th place, which made him 13th in the general classification and confirmed his position as the best Spanish classifier in the car category, in his BV6 prototype with adapted controls on the steering wheel.

The timed 289 km around the outskirts of Erfoud in the south of the country raised the level of difficulty with sand and dunes. On this terrain, Isidre Esteve and his co-driver Txema Villalobos performed incredibly well, clocking up a time of 4 h 42:10, which put them in the leading group.

“Today was definitely the most scenic stage of this rally. We crossed Erg Chebbi and another line of dunes that I had never visited before. We did it at a very steady pace and we really enjoyed it. It was fantastic to see how well the car performs on this type of terrain after the latest modifications,” said Isidre Esteve.

Unlike previous stages, this time the mechanics played up in the final section. “About 40 km from the end of the race and after hitting the ground coming down from a dune, the fan blades touched the radiator and the vehicle started to overheat. We had to stop and Txema Villalobos tinkered a bit so that we could continue with the rear radiator disconnected. This allowed us to make it to the finish line, although, obviously, at a slower speed”, said the driver from Oliana, who would have been close to the top 10 if he hadn't lost half an hour.

Despite this setback, Isidre still had a positive outlook. “This situation was good for us because we were able to identify a problem that can be solved before going to the Dakar” — a fault that won't prevent his Dakar prototype by Sodicars Racing from performing well and starting the last two stages in Morocco in perfect condition. “The car is performing phenomenally and we are really happy because it’s racing much better than last year”, said the Lérida-born driver.

After the prologue and the first three stages, the Repsol Rally Team holds 13th place in the general classification and second in the T1.2 category (modified diesel all-terrain vehicles), with a total overall time of 12 hours, 59 minutes, and 09 seconds. “Today we've took a significant step up the classification and, despite the time lost because of the radiator, we managed to stay at the top”, said Isidre Esteve.

On Monday, the penultimate stage of the Rallye du Maroc will take place with 342 timed kilometres plus another 7 km of liaison. 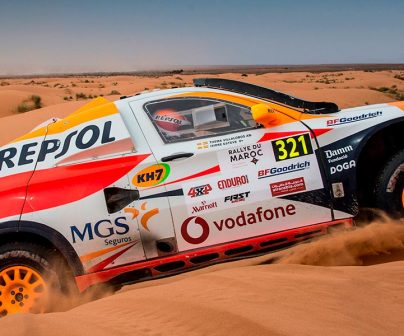