Isidre Esteve returned to Spain last Saturday, from Lima (Peru), where he completed his fourth Dakar in a car and his third in a row, last Thursday. The Repsol Rally Team driver rated his 21st position as “very positive” and described the edition as“extremely tough”.

Some time after after 7 p.m, Isidre Esteve landed at Barcelona Airport, accompanied by his partner and physical trainer Lidia Guerrero. At T1, their friends and family awaited them. The rest of the Repsol Rally Team members were also there, that is, his co-driver Txema Villalobos and his trusted mechanics David Pigem and Carlos Méndez, who had arrived from Madrid on a previous flight.

They all looked both fatigued, from accumulated tiredness during the hardest race in the world, and happy for having overcome countless obstacles to reach their goal. "This year, the Dakar has been shorter than usual, but also much more intense and without any let up. We are tired, but happy with the work we've done”, summed up the driver.

Isidre Esteve finished the 2019 Dakar brilliantly, after overcoming 5,000 kilometres (3,000 against the clock) in Peru. The driver from Lleida finished sixth in his category T1.2 (off-road modified 4x4 vehicles) and 21st overall in his BV6 Sodicars Racing prototypewith Guidosimplex adapted controls on the steering wheel and thanks to his Smart Cushion working well.

"The results aside, the most important thing is that we continue to make progress and have been more competitive than ever. Year after year we are taking steps forward and this time we have kept an extraordinary pace. It's a shame that a few small problems have meant that our progress hasn't been reflected in the final ranking”.

"The feelings have been very good and we are encouraged to come back with an even stronger project".

The driver from Oliana had a few scary moments in Peru:"The route was very demanding, especially for cars and lorries, with many dunes and kilometres of sand where it was easy to run aground. It happened to us several times but luckily for the great work of Txema Villalobos and the help of the KH-7 Epsilon Team who rescued us from a hole in Tanaka on the sixth stage, after a buggy fell on us. Fortunately, nobody got hurt, the car was mechanically intact and everything was just a scare”.

Despite the enormous difficulties, Isidre Esteve has shown desire to return in 2020, for the fourth consecutive year, to the hardest motor race in the world."Of course I want to return to the Dakar next year. The feelings have been very good and we are encouraged to continue working to return with an even stronger project that will allow us to get a little closer to the top”,he said. 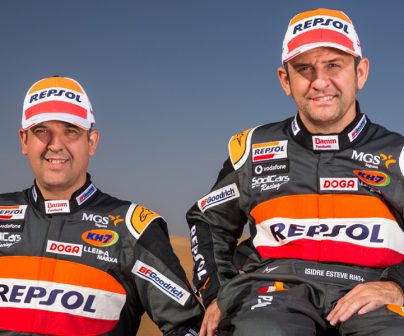