Home / Rally / Isidre Esteve did not complete the stage

Isidre Esteve was unable to complete the seventh stage of the 2020 Dakar, although both he and his co-driver Txema Villalobos, as well as the rest of the Repsol Rally Team, tried with all their might. An issue with the BV6's turbo put an end to all of their dreams and forced them to go back to the camp by road, although on Monday they will be back on track in the new Dakar Experience category.

The turbo of the driver from Lérida’s prototype failed at kilometre 150, which forced him to stop eight kilometres later. From then on, the Repsol Rally Team began an odyssey with the goal of getting to the finish line.

“We waited for the team's quick assistance trucks and they tried to tow us, but it was complicated because the sand was very soft and we had a lot of problems: broken slings, flat tyres, difficulties hooking up the car to the lorries in the sand...A true odyssey”, said Isidre Esteve resignedly. 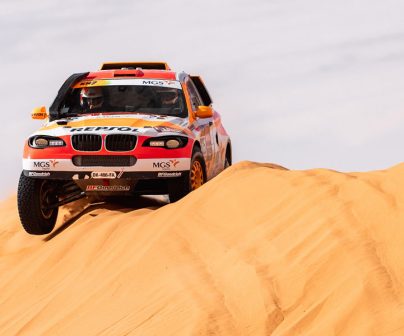 After a whopping eight hours to cover just 100 kilometres, at nightfall the organisation recommended that they abandon the stage because they would be faced with complicated dunes, which were impossible to surmount in such circumstances. From there at kilometre 259, they decided to head over to the bivouac by road to fix the issue, sleep a little, and leave in the morning.

One of the new rules of the Saudi Arabian Dakar is the opportunity to use a wild card to re-enter the race on the next day in the Dakar Experience category, despite not having finished the previous stage. The Repsol Rally Team will continue the 2020 Dakar to face the eighth stage, which starts and ends in Wadi Al Dawasir with more than 700 kilometres in total.

All the members of the Repsol Rally Team want to express their condolences to the friends and family of the Portuguese rider Paulo Gonçalves and send them our wishes at this difficult time. “He was a beloved rider in the camp and there are no words to express our grief for this loss”, said Isidre Esteve, deeply saddened.