As the race advances and gets more difficult, things just keep going better for the Repsol Rally Team in the Rallye du Maroc. This Saturday, Isidre Esteve survived the tough second stage that had defeated several of the favourites. The driver from Oliana was not one of them; nothing could be further from the truth as he has shown himself to be increasingly competitive and scored a brilliant 15th place, placing him 13th in the general classification.

The day’s race took place in the outskirts of Erfoud, with 329 timed kilometres out of a total of 365. Isidre Esteve and his co-driver Txema Villalobos drove very steadily at a constant speed and made virtually no mistakes, which allowed them to skirt all the obstacles in the path to the finish line. Their time of 4h 51:26 put them in the leading group of this prestigious test that counts towards the Cross-Country Rally World Cup, in which many Dakar teams are competing.

“It was a very tough stage with a lot of navigation, difficult routes, small dunes, and lots of camel grass. It had rained a short time before and the water had erased the tracks, making it very difficult to find any crossing points. But, in spite of this, we managed to keep up a good pace and we are really pleased with our performance”, said the driver from Oliana.

They had a major setback towards the middle of the special. “We arrived at a very muddy river crossing and, to avoid running aground, we went into reverse and we were unlucky enough to get stuck on top of some camel grass with all four wheels in the air. The Dutchman Michael Willems helped us to get out, but then he got stuck in the mud and of course we returned the favour. When we got to the finishing line, we hugged each other”, revealed Isidre Esteve.

So, the day had strong doses of emotion and drama, which some aspiring contenders did not manage to overcome. “In this type of race there tend to be many problems, and they could always happen to you. That’s why we must try to go as fast as possible without taking risks and always giving the mechanics the highest consideration. It’s a question of finding the right balance… although that doesn’t guarantee anything either”, he acknowledged.

Isidre Esteve has no doubts about the qualitative leap that his vehicle from Sodicars Racing has taken this season thanks to the latest modifications. “We are a lot faster than last year but have the same feeling of security. We’re much more competitive but aren't running any more risks, and that’s what’s most important. We’re definitely on the right road for Dakar 2019.”

Esteve and Villalobos will try to stay on the right track in another complicated 317-km day (289 timed) featuring dunes and sand. With a cumulative time of 8 hours, 16 minutes, and 59 seconds, Isidre Esteve will start out in 13th place in the general classification and second in his category (T1.2: modified diesel all-terrain vehicles). However, he insists that “I’m not looking at the classification, I’m only worried about the pace of the race and, in particular, whether the sensations at the end of the day are good”. 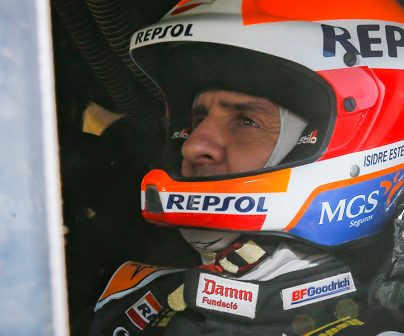