Isidre Esteve exceeded his goals for the Rallye du Maroc 2019, which is the last test to count towards the World Cup for Cross-Country Rallies. The Repsol Rally Team driver managed to complete an intense test for the upcoming Dakar, getting back into competition mode after a long period of inactivity and, to top it all off, with a great result: 12th overall and second in the T1.2 category.

“We are very satisfied because this rally has helped us prepare and carry out our planned work programme. We knew that the Rallye du Maroc was a mini Dakar and that it would be the perfect opportunity to get ready for the rally in Saudi Arabia, both because of the route's characteristics and the important changes introduced by the organisers, led by David Castera”, said Isidre Esteve after crossing the finish line in his 4x4 with adapted controls on the steering wheel by Guidosimplex.

This last stage in Morocco between Aoufous and Fez, with 168 timed kilometres, was very symbolic for Isidre Esteve: “It was a very nice special, with slow areas between pine trees, and other faster ones in which we were able to enjoy the drive. We didn't make any mistakes and drove at a good pace from beginning to end”.

With a time of 2 hours, 41 minutes, and 31 seconds, he finished the day in 12th place, one position below his spot in the general ranking with an accumulated time of 23 hours. Additionally, Isidre Esteve and his co-driver Txema Villalobos have come in second place in the T1.2 category for 4x4 modified diesel vehicles.

“We are very happy with the final result, but above all because we were able to prove that we are more competitive than ever. We knew that the team had done a great job with the car but we needed to prove it in a racing situation, and the truth is that the BV6 has been wonderful. Now we can go faster, and in this rally we are right behind the official teams of Toyota and Mini”, said the driver from Llérida.

The Repsol Rally Team has taken advantage of the almost 2500 kilometres divided into five demanding competition days to determine where there is still some room for improvement. “We have had small problems that we were able to solve, and it's always better to deal with them now than in the Dakar, where they would cost us much more. In general, the prototype works very well and we tried the new BFGoodrich tyres, which we will definitely be using in Saudi Arabia”, the driver from Oliana revealed.

In conclusion, Isidre Esteve left Morocco very satisfied, “We are going back home safe in the knowledge that we have done a great job, and we are ready and raring to take on our next challenge: the 2020 Dakar”. 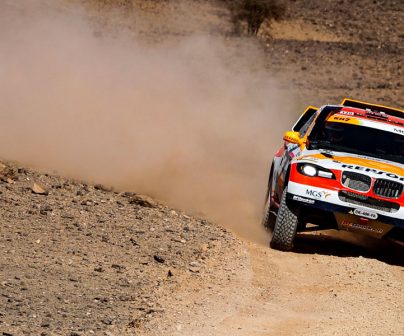