After studying the Dakar 2019 course meticulously, Isidre Esteve's main objective was to overcome the first week of competition without losing too much time. Today, the Repsol Rally Team driver has accomplished his mission, completing the ever dangerous marathon stage and reaching the rest day near the top 20 overall.

The fog was the true protagonist of the day. The lack of visibility forced a delayed start in the morning and, in the afternoon, the organisation decided to cut almost a hundred kilometres off the special due to security reasons. In spite of everything, the route between Tacna and Arequipa wasn't easy and Isidre Esteve himself can give witness to that.

"We have had a really difficult day. We got caught in the fesh-fesh when we overtook a truck and, as a result, we had an electrical problem that Txema Villalobos managed to locate and sort out in 40 minutes. A little later, the windscreen wipers broke and we also had to stop to fix them," explained the driver from Llerida.

After the 425 timed kilometres, the Repsol Rally Team managed to reach the finish line in CP3 in 35th place, two hours, 14 minutes, and 47 seconds, behind the stage winner. “After all the problems we had, it was not a bad day because we could have lost a lot more time ...” recognized Isidre Esteve relievedly.

The driver from Oliana is in 23rd place overall, although corrected times are yet to be announced. Regardless of what happens, he is in a good situation to face the five remaining stages before reaching Lima, next Wednesday, 16th January.

"In general we are satisfied with the first half of the Dakar. It is a pity that we lost more time than expected today, but even so we are in a good position. There are still many obstacles to overcome and I'm sure many things will happen. We hope to maintain our pace and compete the stages without any major setbacks," said Isidre Esteve.

After tomorrow's rest day, the Dakar 2019 will resume on Sunday with the sixth stage between Arequipa and San Juan de Marcona, 810 kilometres for participants in cars, 309 of which will be against the clock. 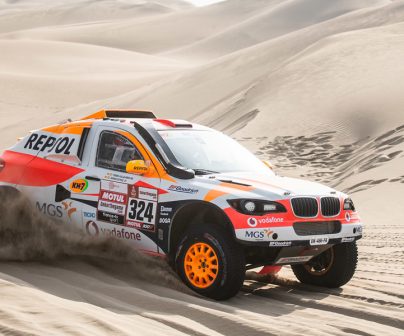 Isidre Esteve makes it into the top 20 overall