Home / MotoGP / “With how young Marc is, I think he’ll be able to win ten titles”

Dani [Pedrosa] is one of the best riders in history, with an exceptional talent

Nani Roma is a motorsport star on two wheels and four wheels, with success in the Dakar rally in both disciplines. He is currently preparing for his 24th edition of the legendary raids competition, but took the time to analyse the MotoGP season in an interview ahead of the return from the summer break.

WHAT DID YOU THINK ABOUT THE GERMAN GP?

“The last race was a masterclass from Marc Márquez, and he looked very calm doing it. I don’t think he was at full throttle, the bike wasn’t moving about, and he didn’t have the typical scares that you get when riding on the limit. He had a majestic race and, if pushed by another rider, he could have stepped it up another level.”

WHAT IS YOUR ANALYSIS OF THE FIRST HALF OF THE SEASON?

“From what we’ve seen so far, Marc is a step ahead of everyone else. His will to win, the way he works, the way he trains… he gives the impression that he feels strong and is ahead of the rest.”

“I think that right now we are seeing one of the best years in history, above all thanks to the introduction of the spec ECU –which has evened everything up a lot. It’s fantastic to see that Honda, Yamaha, Ducati and Suzuki are all taking turns on the podium. For me, one of the things that draws you in is the battle of the manufacturers. The system that the organisers have found, which also gives a chance for factories starting out like Suzuki to evolve, has been very positive.”

MARC MÁRQUEZ TOOK HIS NINTH VICTORY IN A ROW IN GERMANY. WHAT VALUE DOES AN ACHIEVEMENT LIKE THIS HAVE?

“What can I say? When someone wins nine times, consecutively, like Marc has done, it shows the level of talent that he has. I won the Baja Aragón nine times, and I can assure you that I found it very hard. Marc has an exceptional talent. He isn’t the perfect sportsman, because that doesn’t exist, but he’s almost there. Marc has talent, he’s hard working, he loves his job –his sport- and besides that he is intelligent and has surrounded himself with the right people.” 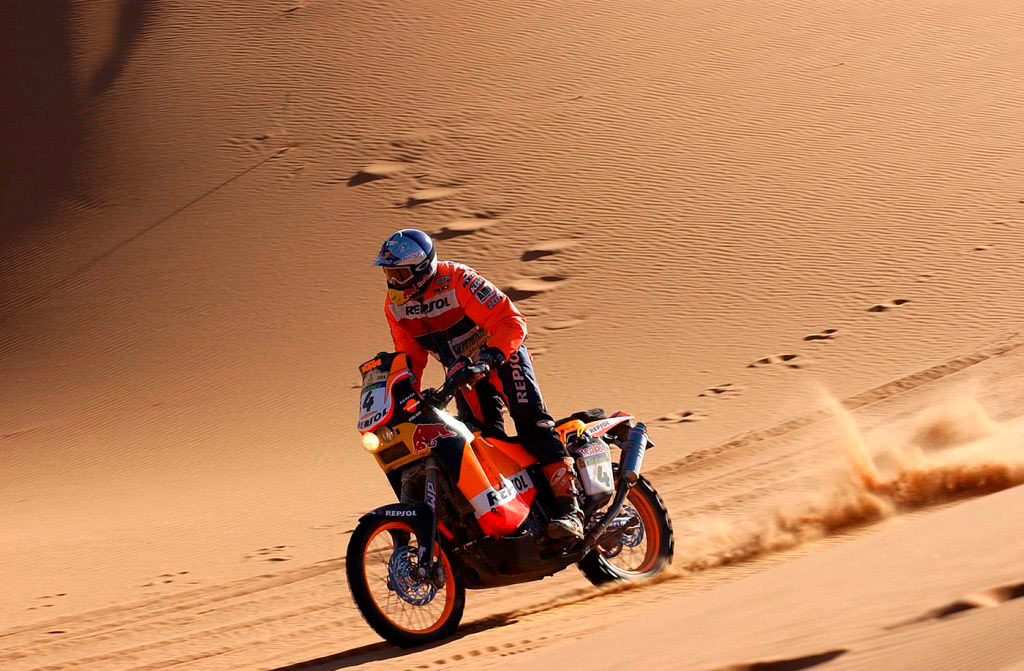 FROM A RIDER’S POINT OF VIEW, HOW DO YOU SEE DANI PEDROSA’S SITUATION OVER THE PAST FEW WEEKS? HOW DO YOU THINK THE SECOND HALF OF THE SEASON WILL BE FOR HIM?

“Dani is one of the best riders in history, with an exceptional talent. His physique helped him a little in 125cc and 250cc, but has hindered him a lot in MotoGP. In spite of this, I think that what he’s done has been incredible. What he’s won, the races he’s had, the competitiveness that he’s shown… He’s a very professional rider, who trains hard and works hard, but we’ve seen that in MotoGP it’s as if you haven’t won anything if you don’t get a title. We forget too quickly what riders at Dani’s level have done. I’m sure that it’s a difficult situation for him, because when you get to a point in the middle of the season where you say “this is it”, I’m sure that it gets harder to find motivation. With his talent, maybe it is harder to let loose and get back to the level we’ve seen up until now, having good races. Above all, I wish him the best and thank him for everything that he has given us fans of this sport.”

AFTER THE F1 TEST MARC DID, DR. HELMUT MARKO PROPOSED THAT HE SWITCH TO FOUR WHEELS. YOU MADE THAT CHANGE. CAN YOU IMAGINE MARC IN F1?

“I made the change from two to four wheels and it went well. I have been fortunate enough to enjoy two different types of riding in the same professional career and I have enjoyed it a lot. I have very good memories of riding motorcycles and it is something I still do, because what it has given me is wonderful. But I’ve also been fortunate enough to have the best cars, the best teams and enjoy myself a lot. With how young Marc is, I think he is able to win ten titles and I am sure that in Formula 1 he would do very well too. If Dr. Marko said something like that, then it is because he saw that he has talent. In this world, nobody hands you anything, and Dr. Marko isn’t usually quick with compliments. In Formula 1 everything is very controlled and they know very quickly how drivers brake, how they accelerate, their cornering, etc.,  so if he told Marc that, it is because he saw something there. I’m not surprised about that with an exceptional rider like Marc.”

HOW IS YOUR SEASON LOOKING AFTER THE ACCIDENT AT THE LAST DAKAR RALLY?

“I’ve had a lot of time to recover, so I’m very happy to compete again. I did my first race, the Silk Way, which is a difficult seven-day race in Russia, and from there we have a fairly packed calendar through to the 2019 Dakar, with many races and many tests to try out the new car developments that will be arriving in September. I’m looking forward to another Dakar: It will be my 24th, so we won’t have much of a break. Christmas will come around soon enough and we will ready to start again.”

WHO WERE YOUR FIRST HEROES IN THE MOTORCYCLE WORLD CHAMPIONSHIP?

“The first riders that I followed when watching races were the Americans. I remember Freddie Spencer, who rode in 250cc and 500cc, and the slides Randy Mamola used to do. I especially remember the era of Kevin Schwantz, Wayne Rainey, and the Australians Gardner and Doohan. Later, when I was competing, the Spaniards arrived: Sito Pons, Garriga, Cardús, Álex Crivillé and company.”