Home / MotoGP / Toni Elías: “At Jerez we will see Marc trying to win the race”

To have the race that Dani had, with only one arm, is incredible

The Spanish rider, who made his Grand Prix debut in 1999 and was teammate to a rookie Dani Pedrosa in 2001, was one of the familiar faces at the event held in the United States. There he met up with old acquaintances and watched Marc Márquez take another victory at a circuit where he has won for six consecutive years.

IN AUSTIN YOU WERE IN THE SAME PADDOCK AS THE MOTOGP WORLD CHAMPIONSHIP. DID YOU HAVE THE CHANCE TO SEE THE PREMIER CLASS RIDERS ON TRACK?

“I watched qualifying, the warmup and the race, and I really enjoyed being able to watch them at certain corners. You appreciate the stability that they have when braking, their corner speed, the grip and especially the traction they have coming out of the corners. From the outside you could see which riders were really going fast, like Marc [Márquez] -because you looked at the times and he was the one ahead of the rest.”

WHAT CAN YOU TELL US ABOUT MARC AND DANI’S RIDING?

“Dani [Pedrosa] is a rider that I have known very well since we were teammates, and I have been following his career over the years. He is very precise, very elegant and very fast. I really like watching how he rides a bike. Marc’s style is awesome, because from the outside you can see that he is a rider who used the brakes a lot. He is very fast and you see that he brakes very late, but has a very fast corner speed and opens the throttle very early. He does some amazing things. As for what we saw on Saturday, when he crashed: One thing is to go in the direction of the corner, lose front grip and try to save it -which is something that nobody does, but somehow he saves it. On Saturday, the bike was turned in the opposite direction to the direction of the corner, and even then he was trying to pick it up. I was with Kenny Roberts Jr. and we both looked at each other, saying that we had never seen anything like it in our lives. It’s impressive, because his riding is very high level and I love watching him ride, because of the combination of speed and bravery that he shows on track.”

WHAT DID YOU THINK OF THE HONDA?

“What struck me most was the traction the bike has. The team, the riders and the factory have all done a good job, because it has lateral grip at full lean that optically, from the outside, looks really beautiful. In the mixed third sector at Austin, Marc accelerated with the bike leaned over much more than the other riders. That means he gains time and I liked seeing those details. When Dani went past, you could also see that. I think they have done a good job and, while in other years you could see them struggle a lot and improve little by little, from the beginning this year they are at a level much higher than in other seasons showed.”

ON SUNDAY YOU HAD A RACE SIMILAR TO MARC’S: RIDING AT THE FRONT AND BEING ALONE FROM THE FIRST TO THE LAST LAP. WHAT IS THE MOST IMPORTANT THING IN A RACE LIKE THAT?

“The most important thing is concentration. When you know before the start that you have a higher pace than the rest, what you want to do is concentrate on starting well, get out of the first corner in first position, and impose your pace from there. You know that at some moments you can relax, but the most important thing is to concentrate on that pace that you found in practice, letting it flow. A race that you lead alone is more boring; in such cases it is very easy to lose concentration and end up crashing. They are long races, in which you have to fight against yourself, set your pace, fine tune details, control things to make sure that pace does not change, and adapt your riding to the decreasing grip of the tyres as the laps go by.”

MARC HAD WON FIVE TIMES BEFORE AT COTA. DO YOU THINK HE HAD A LOT OF PRESSURE ON HIM TO ACHIEVE THE SIXTH VICTORY?

“Honestly, I don’t think so. He isn’t a rider who is affected too much by the pressure. On the contrary: He loves it. The Circuit of The Americas is ‘his’ track, and when you go out on track knowing that you are good there, then that helps you to go even faster. I think that even if you gave him a bicycle, he would win there. It’s a circuit for riders who go hard on the brakes, and it fits him like a glove. He came into the race happy and motivated, knowing that he was in his ‘yard,’ so whether it was raining or hot, and even though things got difficult, he knew he had what it took to win. That is why he has done it so many times.” 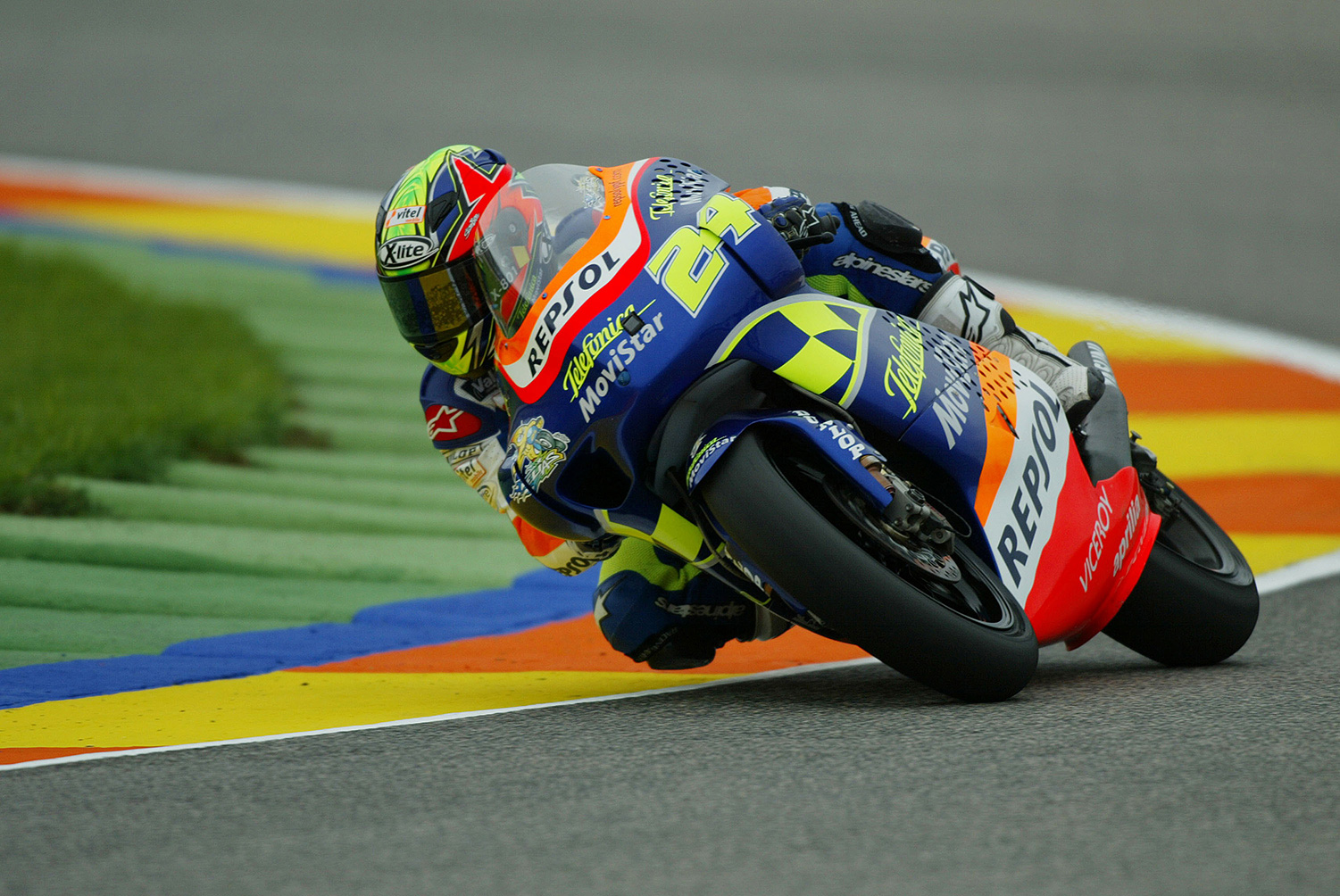 DANI RETURNED TO ACTION JUST 10 DAYS AFTER SURGERY. YOU KNOW WHAT IT IS LIKE TO RIDE INJURED; WHAT DID YOU THINK OF HIS RACE?

“In these cases it’s a difficult situation, because you’re not in good condition, it hurts and when you ride you have to give your best. When there is pain, psychologically it is tough. I was talking to him after the race and he told me that he has been injured so many times, that he has managed to eliminate from his mind that part of him that was broken and recently operated on. It’s a huge mental task and to have the race that he had, with only one arm, is incredible. To get the amount of points he got, and finish so close to the front group, so shortly after the injury, was something I did not expect. After an injury like that, the most normal thing is that after three or four laps, your head tells you that you can’t take the pain. Everyone would have understood that, but he endured it, followed the pace, and also got some very important points, which could be worth a lot in the title fight.”

WHAT CAN WE EXPECT FROM HIM AT JEREZ, WHERE HE WON LAST YEAR?

“Dani is always a very fast rider, and there will be weekends where he will feels good from the first lap, when he is capable of having a great race and the others will not get near him. He also brakes very hard, although it is not his strong point. At Jerez, with it being a race in Spain, he is very motivated and always has a great pace. Having rested up a little longer, I’m sure he is feeling better and we will see him stronger than in Austin.”

“Jerez is the first European race of the year and, historically, after places like Qatar or Argentina where there are strange races and the results are not always totally in tune with reality, it is the first time to see who is strong. You can see who is where they should be, and who has to improve. They are not easy weekends, but I think Marc comes into the race well prepared; his bike is superior, so we will see him trying to win the race.”

WHAT DID YOU THINK OF THE FIRST THREE WORLD CHAMPIONSHIP RACES?

“In general, I think things have not yet settled into their rightful order yet. We’ve had three very strange races. Crutchlow did a good job and was the series leader going into Austin, but it is not normal for a privateer team rider to win a race. Ducati have started very strong, with great speed, although it seems that they have other problems. Rossi has been consistent and Maverick [Viñales], too. Marc has recovered points… Now they go to Europe and we will see more consistency in results.”

WHAT DO YOU THINK THE REST OF THE SEASON WILL HOLD?

“It has already been seen that Honda are at a good level, Yamaha usually adapt well to European races and last year we saw that Ducati have potential. This year Suzuki have joined the fight, with two podiums from the opening races. We could see some very fun races, with a lot of fighting, and hopefully Aprilia and KTM will also be up there. All this makes for a very interesting championship and allows for a lot of variables, so it is likely that if they continue like this, they will take the fight to the end -and that will be very interesting.”

HOW LIFE FOR YOU COMPETING IN THE USA? IS THERE MUCH DIFFERENCE BETWEEN THE CHAMPIONSHIP IN WHICH YOU COMPETE AND THE WORLD CHAMPIONSHIP?

“I’m very happy. I am living in Los Angeles, a city where you can do everything. I live next to the beach, in a surfing area, so I’ve taken that up and every day I practice to try to improve. I love it. It is a city with a lot of diversity, in terms of business options, tourism, leisure… There is a lot of activity, a good economy and if you are even slightly skilled you can do well. I am very happy, I feel at home, in a place where I will be spending many years.

The MotoAmerica championship treats me very well. I have a good bike and am on a factory team in which I have a perfect situation. It is not easy, because there are tough rivals and other factories that make things difficult, but it’s going well. We managed to win the title last year and have started this season winning three of the first four races. Comparing the series is complicated, because MotoGP is where everyone wants to be, where the best riders and the best bikes are, but for me the situation was not favourable to be on a factory team, which is an option I do have in the United States. It makes more sense to be here and enjoy myself, which is the most important thing for a rider. I am 35 years old, an age at which one can begin to think about retiring and, in my case, with such a favourable situation at the moment, that option is something that I completely rule out; I want to keep riding and keep winning, because I am very motivated and I am fit. Let’s hope it lasts.”