Testing in Qatar continued as the sun beat down on the Losail International Circuit, the second day beginning at 13:00 Local Time. While the opening round of the 2020 MotoGP World Championship will take place under Qatar’s famous floodlights, lapping during the day allowed both sides of the Repsol Honda Team garage to continue assessing the various aspects of the 2020 Honda RC213V MotoGP machine. Working steady from mid-afternoon, Álex Márquez and Marc Márquez completed a total of 94 laps between them.

Entering the circuit at 15:00 Local Time, Marc Márquez enjoyed a productive start to the day. A fall with just over three hours of the test to go at Turn 8 saw Marc escape injury and return to the circuit soon after, then improving on his lap time from before the fall. Finishing the day in 14th, the World Champion’s 1’54.823 from day one remains his best lap of the test so far.

Continuing to battle through a head cold, Álex Márquez improved his day one lap time by eight tenths and wrapped up the second day seventh tenths behind his Repsol Honda Team team-mate. Each lap has awarded Álex and his team more data as they continue to refine the Honda MotoGP machine for the rookie. The reigning Moto2 World Champion is aiming to make the most of his final day of testing before making his MotoGP debut early next month. 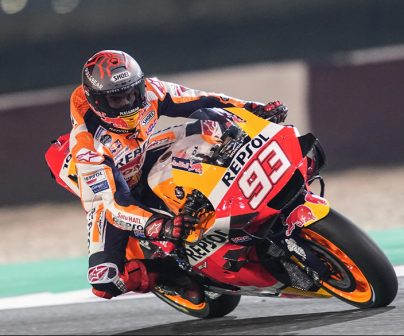 The Repsol Honda team returns to work in Qatar Test

Today I had a crash at Turn 8 in the change of direction, I’m having to use my legs more with my shoulder still recovering and I pushed a bit too much and lost the front and wasn’t able to save it. Fortunately, I am OK after this.

We are trying to find the best way but it is always difficult here in Qatar. At the moment we’re looking at why we are struggling a little bit more here than in Malaysia. Tomorrow we will keep working and also start to look towards the race.

I was feeling better today physically, and I was able to achieve more than yesterday so I am pleased with how today went compared to yesterday. Towards the end of the day I was lacking a little bit of power but in general it was a better day for us.

We still need to work more with the bike, so the final day will be important for us. There’s still a chance to improve before I go in to my first race weekend so this will be the focus.