Home / MotoGP / Randy De Puniet: “You get the impression that Marc Márquez can win every race”

“Dani Pedrosa can win races, he is not far off his teammate and I think he can finish in the top three in the MotoGP World Championship.”

Marc Márquez comes into the sixth round of the MotoGP season, the Italian Grand Prix, leading the MotoGP World Championship after a third consecutive victory. Former rider Randy De Puniet, who now works as a commentator in his native France, analyses the reigning World Champion’s season so far, as well as that of teammate Dani Pedrosa.

HOW DID YOU SEE THE MOTOGP RACE AT LE MANS?
“My impression is that today, Marc Márquez is stronger than everyone else. Once again, he played a little with his rivals. In the race we saw that Johann [Zarco] was very motivated to win and made a mistake through being too hasty. It’s easy to say now, as an outside observer, ‘maybe I should have waited a few more laps, because if I had overtaken him, maybe I would have had a good chance to try to open a gap from Marc.’ We also had a nice surprise from Petrucci, who rode a very good race, and Valentino’s [Rossi] podium. Starting from the third row, he showed that when he wants things to work, he manages to get out of difficult situations.”

IT WAS THE GRAND PRIX WITH THE MOST CRASHES SO FAR THIS SEASON, AND THAT WAS DESPITE THE FACT THAT SURPRISINGLY IT DIDN’T RAIN THIS YEAR. WHAT DO YOU THINK THE CRASHES WERE DOWN TO?
“One of the reasons is that there are not many left-hand corners, so that side of the tyre cools faster. In addition, this year the weather was a little tricky, because it was sunny but the wind was quite chilly and made the temperature drop on one side of the tyre. That’s also why we saw crashes when riders were coming out of the pits, or when they were going a little slower than normal.”

DID YOU WATCH THE MOTOGP RIDERS FROM TRACKSIDE? WHAT STANDS OUT TO YOU ABOUT THE MAIN CONTENDERS?
“No I didn’t. As a commentator, I can no longer go trackside, but I follow them closely. Márquez is an incredible rider and has a style of his own that allows him to ride with practically his whole body touching the ground. He seems to always force a loss of grip with the front wheel in order to understand where the limit is. That is impressive. I love it, because you see how he has fun and watching him on track is a pleasure.

Viñales is also a very good rider. I like him a lot and last year I thought he would become World Champion, but maybe psychologically he’s struggling a little more. When everything works well, he can be a rival to Marc, but when the problems appear, it is harder for him to calm down and find his way. He’s a bit like Jorge Lorenzo, who went through the same thing.

Dovizioso is a very complete rider who doesn’t make mistakes, and last year he surprised me, because he was fighting for victories with Marc. He showed a new side to him and I think this year he is even stronger, but he has lacked luck and has dropped out of the title fight a bit.”

A YEAR AGO, MARC LEFT FRANCE WITH A 27 POINT DISADVANTAGE AFTER FIVE ROUNDS, AND AFTER MUGELLO IT GOT TO 37 POINTS, BUT IN THE END HE MANAGED TO PROCLAIM HIMSELF CHAMPION. DO YOU THINK THAT THIS YEAR WE COULD SEE A TURNAROUND LIKE IN 2017?
“No, I don’t think so. Unless there is an injury or something that penalises him, he has a big cushion.  We saw that in Argentina, where he was able to ride a second faster than his rivals. That’s taking into account that this year the level of competition is very high, with many riders capable of riding at a very similar pace.”

MUGELLO IS A VERY DIFFERENT TRACK TO LE MANS AND JEREZ. WHAT DO YOU THINK WILL HAPPEN AT THIS GP?
“In theory the Ducati will not be too bad, but I imagine that Marc, at a circuit where he is normally not a favourite, will win the race. You get the impression that he can win every race until the end of the season.” 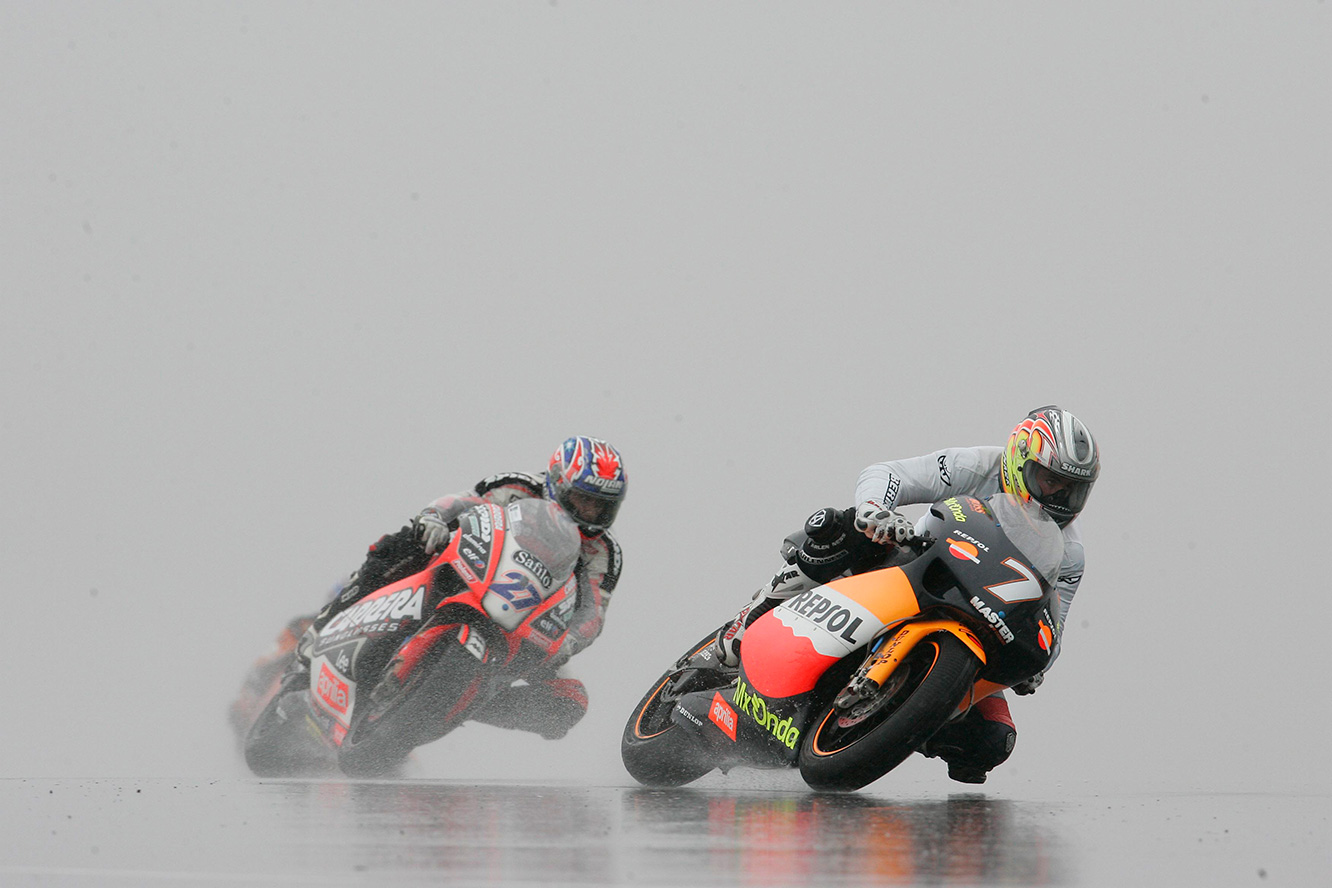 WHAT DO YOU THINK ABOUT MARC’S ABILITY TO MAKE SAVES?
“Marc forces the crashes. He pushes the front wheel slide in order to see how far it can go. There comes a moment in which he finds the limit during practice, but he doesn’t crash in the races anymore. He has this ability to ride with his body off the bike and with his elbow touching the ground as if it were a third wheel, allowing him to get into situations in which any other rider would crash. It’s incredible.”

DANI PEDROSA HAS HAD A DIFFICULT START TO THE SEASON, BUT IN FRANCE HE FINISHED FIFTH, 7 SECONDS OFF THE FRONT. WHAT CAN WE EXPECT FROM HIM IN THE NEXT FEW RACES?
“Unfortunately, throughout his MotoGP career he has lacked a bit of luck, something that we’ve also seen this season. He’s a very good rider, but once again he’s got injured and many times it hasn’t been his fault. He can win races, he’s not far off his teammate and I think he can finish in the top three in the MotoGP World Championship, but he has to get back to one hundred percent fitness.”

YOU WERE A HONDA RIDER IN MOTOGP. HOW DO YOU SEE THE HONDA BIKE THIS SEASON AND WHAT WOULD YOU HIGHLIGHT ABOUT IT?
“It seems to me that this year the Honda is the best bike on the grid. At the beginning of last season we saw that it wasn’t working well and Márquez made some mistakes, but towards the end of the year he improved a lot. Now you can see that it is much more stable under braking and when entering corners, and the acceleration and top speed have also improved. It shows that they have worked a lot on the bike, because Marc has much more of an advantage compared to last year. Also with Crutchlow and Pedrosa, who have gone very fast. ”

YOU ARE CURRENTLY COLLABORATING ON EUROSPORT FRANCE BROADCASTS. DO YOU MISS GETTING ON THE BIKE ON SUNDAYS FOR MOTOGP RACES?
“It’s something that I like and that is easy for me, because they ask me to explain things a little more technically and I try to explain and anticipate what might happen during the races. It is an experience that I am enjoying, and I feel comfortable. I can also combine it with endurance races, which continue to be my connection to the world of competition.”

YOU’RE STILL COMPETING, BUT IN THE ENDURANCE WORLD CHAMPIONSHIP. WHAT IS THAT EXPERIENCE LIKE?
“What I like most is to be able to ride and having much less pressure than in Grand Prix races. It’s a world that I loved, but at some point you have to choose your path and, in France, the world of endurance racing is something very special. It has events like the 24 hours of Le Mans and the Bol d’Or. I haven’t won them yet, so I would like to do that. I continue riding, I’m enjoying myself and that is what it is all about.”