The Repsol Honda Team rider matched his second best winning streak of all time in Australia, set in 2010 in 125cc. His best ever run was at the start of the 2014 season, when he achieved ten straight victories.

If Márquez finishes seventh or higher at Sepang, claiming more than eight points, he will exceed the points record for a single season achieved by Jorge Lorenzo in 2010: 383.

Lorenzo missed last year’s race at the Malaysian track through injury, but previously accumulated 6 consecutive podium appearances there, in addition to a victory in 2006 in 250cc. 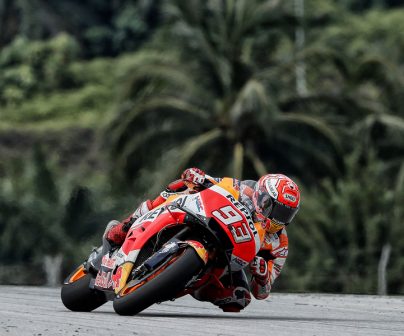 We enjoyed a great victory in Australia as me, the Repsol Honda Team and the bike are working very well together. Now we arrive at the last race of the triple, but it’s not time to stop and relax.

Sepang is another track where I think Yamaha will be fast, as will Ducati, but the target is of to try and fight for victory again. We will see how the weekend goes and adapt as we need to.

Sepang is a track where I have had good success in the past. Earlier this year I was not able to test in Sepang because of my training injury, but my team were there testing so already we have some ideas of what to do with the bike.

Compared to Australia, the circuit in Malaysia should suit me more and I think we will be able to get back to where we were in Motegi. We will see how the weekend progresses there.

¡Get prizes with Pelouse Map!