After leading the way in FP3 and FP4, Marc Márquez places first in Q2, using slick tyres in mixed conditions on his final run.

The Repsol rider claimed the best time of 2:02.753, going 2.5 seconds quicker than his nearest rival.

Márquez took his sixth pole position of the season, and his 58th since arriving in MotoGP. He is level with Mick Doohan for premier class poles.

Stand-in Repsol Honda teammate, Stefan Bradl, placed seventh in Q1 with a time of 2:05.974, and will take off from the sixth row. 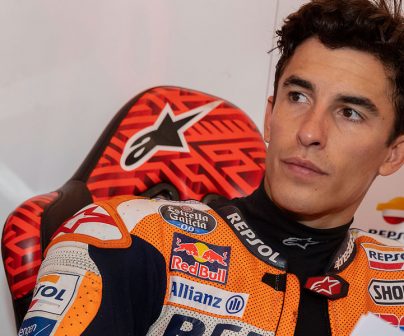 At the start I believed in the slick tyres with how the conditions were changing. In the end when the rain came back and the track got wetter it was difficult! Maybe in hindsight I took a little too much risk, but in the end we finished in a good way and I am happy.

Tomorrow it looks like it will be a sunny day so a normal race. With the conditions we have had, it is hard to know where everyone is but the target is the podium!

Today was a tough day with the conditions, it was difficult for me as it has been over a year since I’ve ridden a MotoGP machine in the wet. I needed some time to get adapted but we found a good direction quite quickly.

Of course I would like to be further up the grid and the target is to finish in the points and push for the top ten. I also want to say a big congratulations to Marc because what he did was incredible to watch.