Starting from pole position, Marc Márquez set the fastest lap of the race and led from start to finish at Motegi.

The win in Japan was the tenth of the season for the Repsol Honda Team rider, and his fourth in a row. The run, from the San Marino Grand Prix onwards helps clinch the constructors title for Honda. 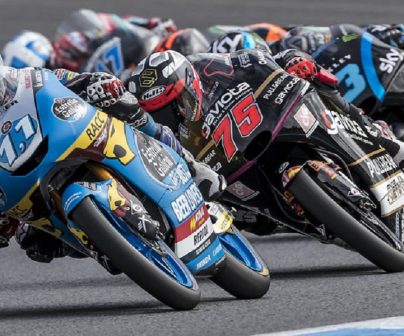 Sergio García places fifth in best race of the season

It wasn’t an easy race. I was pushing from the beginning, the strategy was clear – I had to try to open a gap. I felt strong and with the team we had calculated a pace of 1’46 low but then I was able to ride in 1’45 high – good news for me but I had to slow down a little bit. I worked on riding as smooth as possible and I was able to open the gap to two seconds but in the final two laps we were getting a little low on fuel because Motegi is always very demanding.

There was a little bit of pressure to win the Constructors Championship in Japan, but I love the pressure and it is great to win it here for Honda because everyone works so hard. All the Repsol Honda Team did a great job to find the best setting and strategy for this race.

We made an improvement on the bike this weekend and my feeling was better. Today in the second part of the race I was able to enjoy riding the bike again and go much faster than at the start of the race. At the end we were closer to the front than any of the other races since my injury, a second from the fastest in the last laps.

The problem was at the beginning, I couldn’t play with the bike as much as at the end and this is where we lost all our time. But towards the end I was able to little by little, brake later and go faster. With the pace at the end I could have been closer to the leader. Now we try to keep the momentum for Phillip Island.