Home / MotoGP / “Marc is creating his own style, a different way of riding the bike”

Jorge Martínez ‘Aspar’ was a four-time World Champion in the 1980s and is someone who has dedicated his life to the world of two wheels. He currently runs one of the main privateer teams in MotoGP: The Ángel Nieto Team. ‘Aspar’ talks about this weekend’s race at the historic Silverstone circuit, and Marc Márquez’ lead of the premier class.

YOU’VE SPENT MORE THAN HALF YOUR LIFE IN THE PADDOCK, AS BOTH A RIDER AND RUNNING YOUR OWN TEAM. HOW HAS THE WORLD CHAMPIONSHIP CHANGED OVER ALL THESE YEARS?

“It has changed a lot, and in a considerable amount of aspects. In most cases it has been for the better, although obviously some things have been lost, such as the romanticism that was there at the beginning, where everything was much more intuitive and not so technical. I would highlight the great evolution that has taken place in the last 25 years, since Dorna came onto the scene, during which time safety at the circuits and the ability of the riders has improved remarkably.”

IN YOUR TIME AS A RIDER, YOU WERE ABLE TO WIN TWO RACES IN TWO DIFFERENT CLASSES ON THE SAME DAY. DO YOU THINK THAT THIS WOULD BE POSSIBLE NOWADAYS?

“I don’t think it would today. It would be practically impossible, because at that time everything was very different and nowadays there is an amazing amount of equality, both on a technological level as well as in terms of riding and training.”

HOW DO YOU SEE THE WORLD CHAMPIONSHIP THIS SEASON?

“We are enjoying one of the best seasons. The regulations introduced over the last few years have made things equal, in the same way that already existed in the smaller classes of Moto3 and Moto2. In MotoGP, the factories always had that small difference. The factories are always going to have some small details that are different, but we have 16 riders riding within the same second and that is something that had never happened before. At the Grands Prix in Holland, Germany, Czech Republic and Austria, we saw some beautiful races, with a lot of overtaking. We are experiencing the most even season in terms of riders and technology.”

THE NEXT RACE IS AT SILVERSTONE. WHAT AWAITS US AT THE BRITISH TRACK?

“I think more of the same, and I hope that’s the case, because this is very good for the championship, for the show and for the fans. It’s even the case for the riders, because someone from a privateer team can almost be up there with Lorenzo, Dovizioso and the rest. I’m talking Crutchlow, Petrucci, Zarco or Álvaro [Bautista], who finished fifth in Germany, fighting for the podium.”

MARC MÁRQUEZ HAS STARTED THE SECOND HALF OF THE SEASON WELL, BUT SO HAVE DOVIZIOSO AND LORENZO. DO YOU THINK ANY OTHER RIDER WILL JOIN THEM IN THE TITLE FIGHT?

“Without a doubt we are seeing Lorenzo grow with the Ducati, which is taking more and more steps forward. Dovizioso was already someone we expected to be up there, because last year he was the rider to beat, besides Marc. The disappointment has been Yamaha. We’ll see if they find their way a bit, because it would be good if both Máverick [Viñales] and Valentino [Rossi] were to take a step forward, although in the middle of the season I can’t see it being easy, honestly. I have to say that on Saturday afternoons, within the team we make our bets on the top three and, of course, Marc is always there, but it is not easy to say what will happen on Sunday, because a rider can always join in the fight.”

WHAT DO YOU THINK OF WHAT MARC MÁRQUEZ, AGED JUST 25 YEARS OLD, HAS ACHIEVED?

“I think Marc is defining an era. He has been incredible since he arrived in the World Championship. In 125cc he already stood out, then in Moto2 and now in MotoGP. He is creating his own style, a different way of riding the bike, and he is the only one that is not making mistakes. He is a rider who really is one step ahead of everyone else. Now he has a big points advantage and he still doesn’t let up in any race; he is always fighting for the victory. Clearly, Marc is the point of reference in the World Championship.” 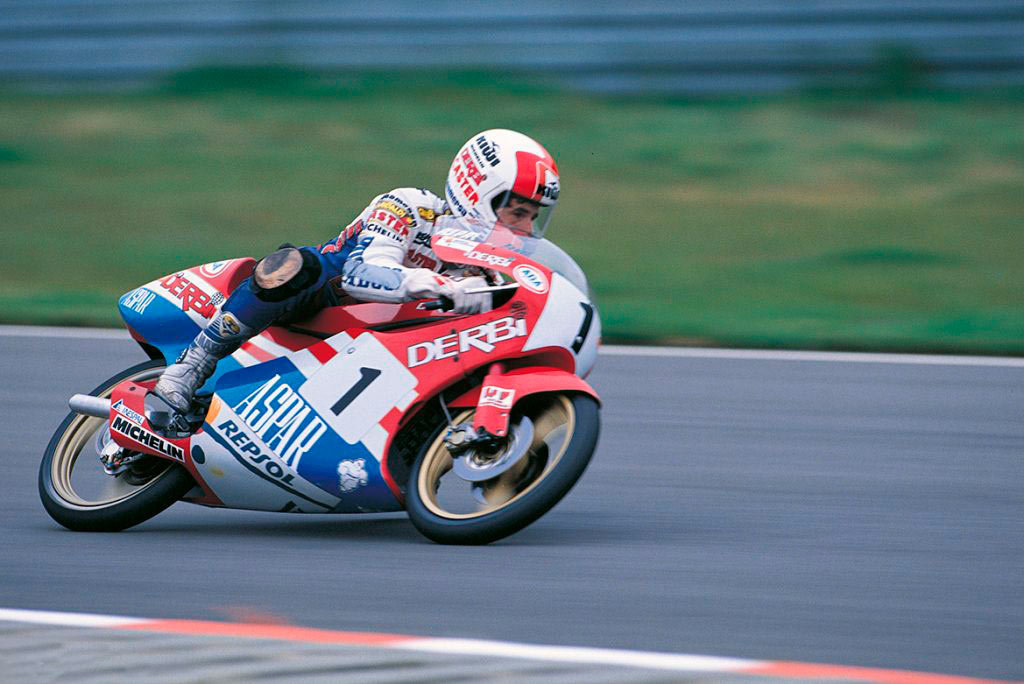 DANI PEDROSA HAS WON AT LEAST ONE RACE PER YEAR SINCE JOINING THE MOTOGP WORLD CHAMPIONSHIP. DO YOU THINK HE WILL GET A VICTORY BEFORE THE END OF THIS YEAR?

“Hopefully! I would be very happy for him, because I think he deserves it. Dani is a rider who has also established a style and has a great story. I think that the decision he made to retire at the end of the season as an active rider says a lot about him and how he is. He already has an impressive track record, but he is a rider who deserves to win at least one Grand Prix this season. ”

WITH A SINGLE TYRE SUPPLIER AND THE SPEC ECU, WHAT DO YOU THINK MAKES THE DIFFERENCE RIGHT NOW IN MOTOGP?

“Without a doubt, electronics have evened up the series, but tyres are having a big say at the moment. Making the right choice, finding the correct pressure, achieving the ideal temperature, etc., are things that decide the result of a Grand Prix.”

HOW DO YOU SEE THE ROLE OF ALBERTO PUIG AS TEAM MANAGER?

“Alberto is a person with a lot of experience who has done almost everything: He was a winning rider, he found kids in promotional cups, then obviously he was with Dani and with many other riders for years. Now he is doing a great job and I think the decision to sign Lorenzo was very, very brave. He’s going to have to be able to handle this great new lineup for next year, which has no less than thirteen titles to their name. He’s going to have to deal with two strong characters and top class riders.”

YOUR TEAM IS NAMED AFTER ÁNGEL NIETO. DO YOU THINK THAT ÁNGEL WAS AWARE THAT HE WAS THE PRECURSOR OF THE NUMEROUS SPANISH RIDERS IN THE WORLD CHAMPIONSHIP?

“As I have always said, Ángel was without a doubt the one who really laid the first stone in Spain and who fought with the media and sponsors in the seventies to really talk about and support motorcycle racing. He started what the sport is today in our country. Now Spain is the leading country in terms of circuits, teams, riders, schools, Dorna, etc. It is a real shame that he is not with us, but he would be very happy to see what everyone has done for him, how much they remember him and the numerous tributes that he has had dedicated to him.

I had the great fortune of having competed with him; First in 1981, then in our two years together as teammates for Derbi. I had the great privilege of spending time with him, both professionally as a rider, as well as personally, such as when he stopped competing and his children were living at my house. He was a very friendly person and he connected with the fans and the people on the street, and would probably be surprised -in a positive way- by everything that has happened after he left us. Giacomo Agostini, the fifteen-time World Champion, said during the tribute to Ángel in Madrid: ‘They will never do anything like this for me in Italy.’ I think that says a lot about how Ángel was and how admired he was as a rider and as a person.”

WHAT IS YOUR PREDICTION FOR THE TOP THREE IN THE MOTOGP WORLD CHAMPIONSHIP THIS SEASON?

“If no unforeseen surprise occurs, which I hope it doesn’t, the title will undoubtedly end up in the hands of Marc Márquez. Second place is harder to say, because there are three riders with a chance: Valentino, Lorenzo and Dovizioso. If they follow the progression they are having now, Lorenzo could be runner-up, Valentino third, and ‘Dovi’ fourth. But nothing is clear.”