Dani [Pedrosa] has a lot more talent than his recent results show, so I hope he can start getting good results again

Alex Barros, the only Brazilian rider to win races in both 500cc and MotoGP, is still closely tied to the world of motorcycle racing. He currently participates in the Brazilian Championship, an activity that he combines with training riders. Ahead of the German GP, the Brazilian explains how he saw the race at Assen a fortnight ago and analyses Marc Márquez and Dani Pedrosa’s chances at Sachsenring.

WHAT DOES YOUR LIFE CURRENTLY INVOLVE?

“I have a team in the Brazilian Championship, in the top class, and I also have a project in Brazil with Emilio Alzamora, through which we aim to prepare young riders. At the moment we have already brought through three riders and we currently have Diogo Moreira in the Moto4 Spanish Championship, in which he is third overall. Besides that, at almost 48 years old I made a comeback last year and finished second in the Brazilian Championship. The idea is to ride this year and stop, although the team will continue, as it is made up of other riders.”

WHEN WILL WE SEE YOU IN THE MOTOGP PADDOCK AGAIN?

“MotoGP is my life and although I have not been able to go to any races for the last two years, I would like to attend a GP towards the end of this season, to see the friends and people I was with on back in the day.”

YOU ARE THE ONLY BRAZILIAN WHO HAS WON IN 500CC AND MOTOGP. WHAT IS MISSING FOR ONE OF YOUR COUNTRYMEN TO REPLICATE YOUR SUCCESS?

“With the aim of promoting Brazilian motorcycle racing, I have been working on a grassroots project for seven years. The idea is that the riders that we train here go on to participate in the Spanish Championship and have a future with the Monlau Repsol Technical School teams. If Diogo Moreira does a good job, he should go up to the European Talent Cup and if the good results continue, he would go to the Junior World Championship and, finally, to the Moto3 World Championship -always within Emilio Alzamora’s structure. In addition, in Brazil we have promotional series with street bikes and another project with competition bikes. What Brazil needs is to give the opportunity to new talent as they do in Spain, where they started working in youth championships in 1986 [the first rider from there was Crivillé]. But this takes at least ten years to bring results and we have already spent seven years on these projects, so I hope that soon our riders will begin to appear in MotoGP.”

WHAT DID YOU THINK OF THE DUTCH TT?

“The race in Assen was fantastic -one of the best in MotoGP history. It reminds me of some similar races, like for example Phillip Island in 2001, in which the front group was fighting for a large part of the race. I wish more races were like that, although it’s hard to get bored in MotoGP races, since there is a lot of equality between the factories. For example, Suzuki have come in and got good results, like Rins’ podium in Holland, and maybe at a circuit like Germany, which rewards agility, they can take a good result. It is very fun and very nice to see all the factories fighting; I hope KTM and Aprilia are also up there soon.” 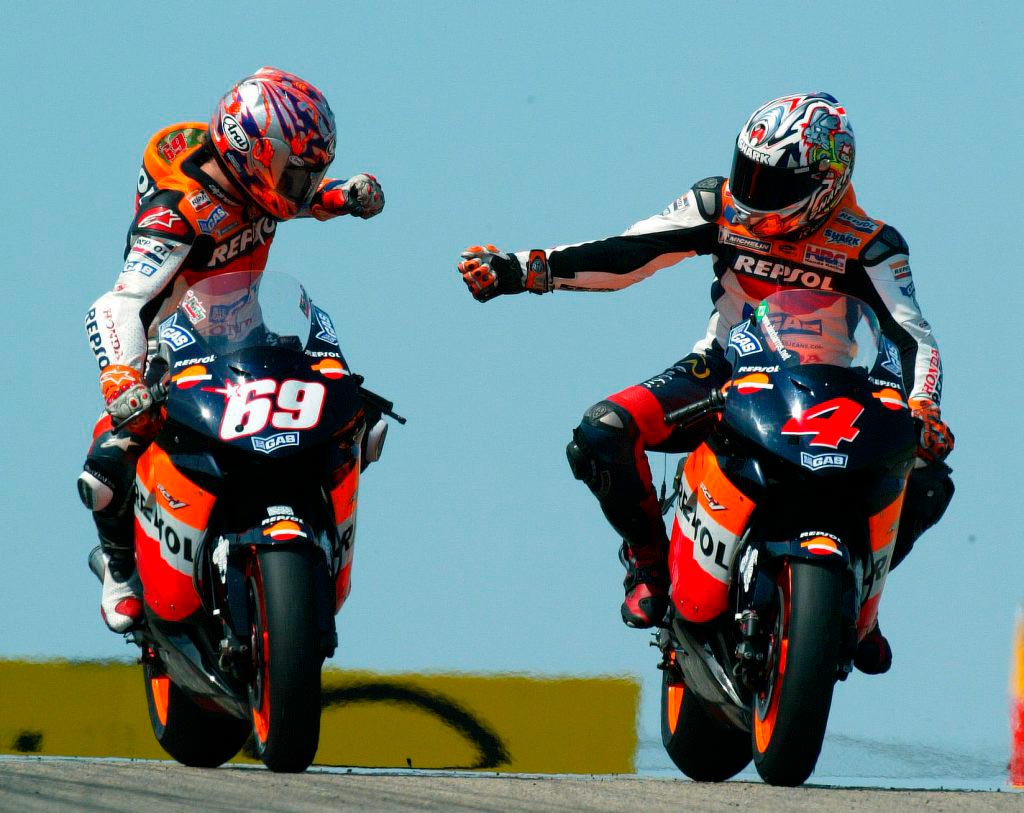 WHAT DO YOU THINK ABOUT THE MARC MÁRQUEZ’ FIRST HALF OF THE SEASON?

“Marc has had a fantastic first half of the season. Without putting anyone down, since last year he has been above everyone else. He is a talented and very fast rider, as we have been able to verify for a long time. Last year the bike gave him some difficulties, he had to really push and that made him grow a lot and be an even better rider than he was. This year, in which the bike is competitive, that gives him a boost. The way he leads, the pace he has… Sometimes he makes mistakes, as happens with everyone, but what Marc is doing at his age is something historic.”

WHAT CAN WE EXPECT FROM THE GERMAN GRAND PRIX?

“I have very good memories of that circuit, where I got good results. I think we could see something similar to Assen. Marc has won so many times at Sachsenring, I couldn’t predict a result, but I hope that the whole Repsol Honda team have a good race.”

IT IS A CIRCUIT WHERE DANI PEDROSA HAS WON FOUR TIMES IN MOTOGP, THREE OF THEM IN A ROW BEFORE THE ARRIVAL OF MARC IN THE PREMIER CLASS. WHAT VERSION OF DANI DO YOU THINK WE WILL SEE?

“Dani has achieved very good results in this circuit in the past. I think he’s going through a difficult time psychologically, since he has a lot more talent than his recent results show. I hope that there, at a track that is good for him, he can start to take good results again.”