A fortnight ago, one of the most emotional editions of the Spanish Grand Prix took place, with several tributes that both the paddock and the fans paid to Ángel Nieto, who died last year. His eldest son, Gelete Nieto, currently Team Manager of the Angel Nieto Team in MotoGP, tells us how he experienced the different expressions of affection for his father and analyses the current MotoGP season before the French Grand Prix.

WHAT WAS THE SPANISH GRAND PRIX LIKE FOR YOU AND YOUR FAMILY?
“It was a very special Grand Prix. We were sad, but at the same time happy to feel so much love and see everything that had been prepared for the event. My father had been part of the World Championship for many years and what we would have liked most would have been to have him with us, but that’s life. There were some beautiful moments: The inauguration of the circuit’s new name in the pitlane, the sculpture of my father at the entrance, unveiled in the presence of family, friends and fans. It was very beautiful and emotional. My brother Pablo and I went around the track using the bikes with which my father won several World Championships. We both felt great emotion from the moment we started the engines until we finished the lap. We realised that the fans were very happy and they paid us a tribute that we will never forget. Every time we went by any corner, they would stand up and applaud us. It was a wonderful tribute to my father.”

IN YOUR NEW ROLE AS TEAM MANAGER OF THE ANGEL NIETO TEAM, DO YOU USUALLY GO TO TRACKSIDE TO WATCH YOUR RIDERS?
“At first my role didn’t involve being trackside, but sometimes the riders have asked me to go there. It’s where you can see many things, especially when the riders have a problem. We also look at the telemetry, but in the end it is easier if someone who understands things tells you that he has seen the problem you are talking about. It is important that the teams have a coach, a person who has raced bikes or who knows the subject, to help and support the team or the rider to try to improve.”

WHAT CAN YOU TELL US ABOUT WHAT YOU SEE TRACKSIDE, IN TERMS OF THE MAIN FACTORIES AND RIDERS?
“In MotoGP, the Repsol Honda team are two or three steps ahead of their rivals. Especially Marc [Márquez]. The biggest advantage they have right now is that on the slow corners, the bike cuts into the turn very well. They even go over the rumble strip, on the inside, things that other riders don’t do. Both Marc and Dani [Pedrosa] pick the bike up very easily coming out of the corners. This year Marc seems more confident; I think Honda have worked hard and he is convinced that he is superior to his rivals.

Marc always provides us all with an uncertainty about what will happen. On many occasions we see him touching the ground, but in the end he manages to lift the bike up. That means that he has the bike very closely under control and that he believes in his talent. With Dani [Pedrosa] the bike does not move around so much, as he is a very precise and very fast rider. Maybe he relies more on having a bike he likes to give one hundred percent, whilst Marc does not need it to go so well to get one hundred and ten percent out of it.” 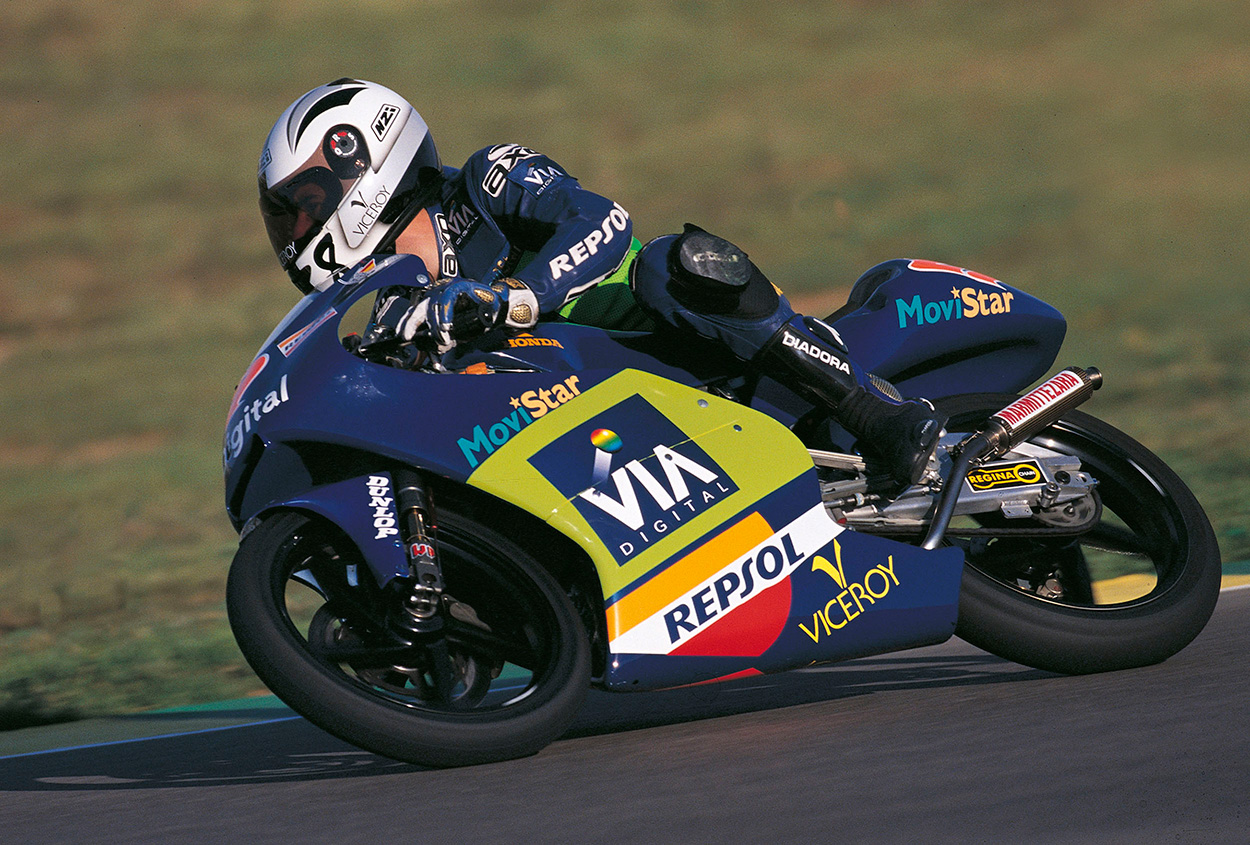 WHAT DID YOU THINK ABOUT MARC’S RACE AT JEREZ? HOW DO THINK HE’S DOING AFTER FOUR RACES?
“He had a brilliant race, as he had at the others rounds. He is well above his rivals. Marc faces every race the same and I think he will continue to do so throughout the season. This year he is superior to his rivals and he took advantage of that at Jerez, he will take advantage of it at Le Mans and he will do so again at the following races. There’s still a long way to go and a lot of things can happen, but right now he is very convinced and has everything under control.”

YOUR FATHER ALWAYS SPOKE HIGHLY OF DANI PEDROSA, WHO HE CONSIDERED TO BE A VERY SPECIAL RIDER. DO YOU REMEMBER ANYTHING HE SAID ABOUT DANI?
“Of course I remember. He commented that he was the most technical rider in the World Championship, the most precise and perhaps the one who rode a bike in the most beautiful way. My opinion is very similar; I think Dani is a brilliant rider. Perhaps he lacks a bit of corpulence, but he is a rider who has beaten Marc, Valentino and other great riders in head-to-head battles. He has had excellent races but the problem, perhaps, is that he needs to have the bike as he likes in order to get one hundred percent from it. In addition to being a great rider, I appreciate him as a person and I wish him the best in the world, because he is a great friend.”

WHAT DO YOU THINK ABOUT THE RACE HE HAD IN AUSTIN WHEN INJURED?
“Dani has always had good seasons, since he started out he has been a World Championship contender who has always been in the Top 5. I think he has lacked a bit of luck, unlike other riders.”

WHAT IS THE LE MANS CIRCUIT LIKE? WHICH RIDERS AND BIKES COULD BE BEST SUITED TO THE TRACK?
“It can rain there, so we must be very attentive to the weather and take advantage if it doesn’t rain to try to have a good qualifying session. It is not an especially difficult circuit; in fact, it is rather simple. The first section is perhaps the most technical, but the rest of the circuit isn’t tricky and that’s where Marc usually goes pretty fast. Anything can happen and the riders and bikes are very close. Anyone who is fighting to get on the podium can win there.”

CAN YOU MAKE A PREDICTION FOR THE REST OF THE SEASON?
“It’s too early to say anything. Suzuki have improved a lot and we still need to see a little more potential from the Ducati higher up the order; I think they will also be there. There is a long way to go and many things can happen. If I had to make a prediction now, I’d say Marc will win the title.”