Home / MotoGP / From foot to elbow: how MotoGP riding has changed

Today we are used to seeing riders lean when going around corners, throwing their body towards the inside of the turn, reaching impossible inclinations of more than 60º, and we now accept it as the natural way of riding a motorcycle. But the style of competition riding has been shaped over the years, adapting to the possibilities that the technology of the time offered –no one would think of riding this way with a motorcycle and tires from 1960–, and incorporating certain techniques developed by key riders in some moments of motorcycling history.

When the World Championship started back in 1949, motorcycling was still dragging along many of its pre-World War II concepts. After the war was over, the activity recovered almost normally in 1947, picking up the races where they left off in 1939, with the same stars as then, but now older and the experience of a terrible time in between.

The motorcycles then still had the structure of the past: they were quite long, with the front wheel far away from the motorcycle mass, and the rider in a somewhat upright position, with their weight loaded on the rear axle. Consequently, when accelerating as they exited turns, the bikes tended to lighten at the front because of the weight transfer towards the back due to the acceleration, and that lack of front support forced riders to open lines. 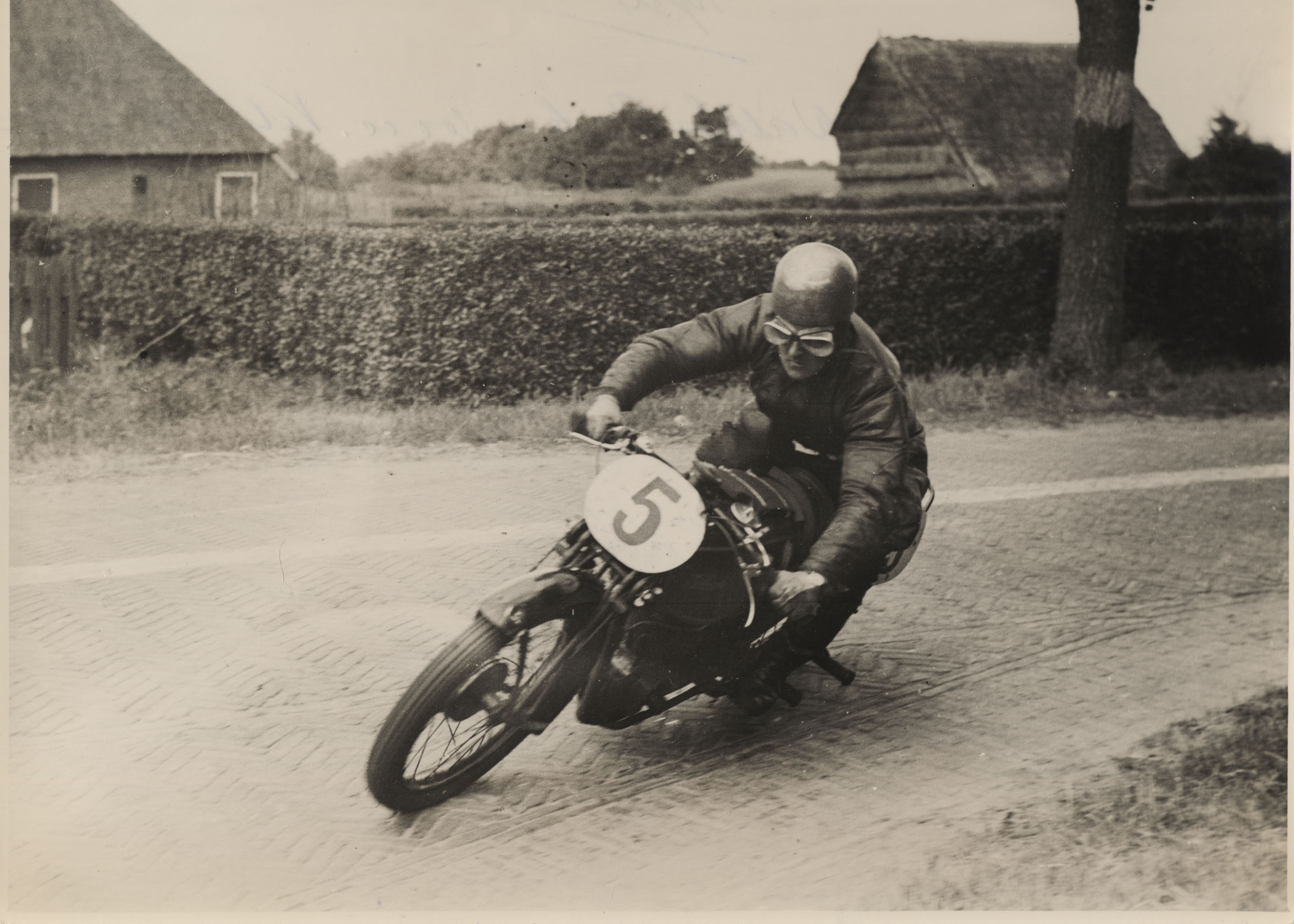 acceleration, and that lack of front support forced riders to open lines.

The evolution of the chassis changed riding

Everything changed with the introduction of the Norton Featherbed chassis, designed by the engineer and rider Cromie McCandless. Nortons had the most forward engine, and in comparison with the Gileras and MV Agustas, its rivals back then, there was less of a distance between the front wheel and the central cylinder block of the bike, and therefore carried more weight in front, suffered less weight transfer towards the back when accelerating, and their riders were able to corner lines with a smaller turning angle.

In that distant era, power was everything. The circuits were designed with the objective of showing the maximum performances of the motorcycles, and the straight sections were abundant. On the curved sections there was little to do: hold on without mistakes under braking, go round corners well, and make the most of the acceleration. Regardless of the best or worse state of a motorcycle, the rider had to deal with other problems, such as the tires.

The improvement of tires also changed the way of riding

At the start of the 50s the base structure of tires was cotton and many layers of cotton were needed to make the tire carcass. The introduction of synthetic fibers developed for military usage during the war, such as nylon, was soon applied to the manufacturing of tires, which represented clear progress. 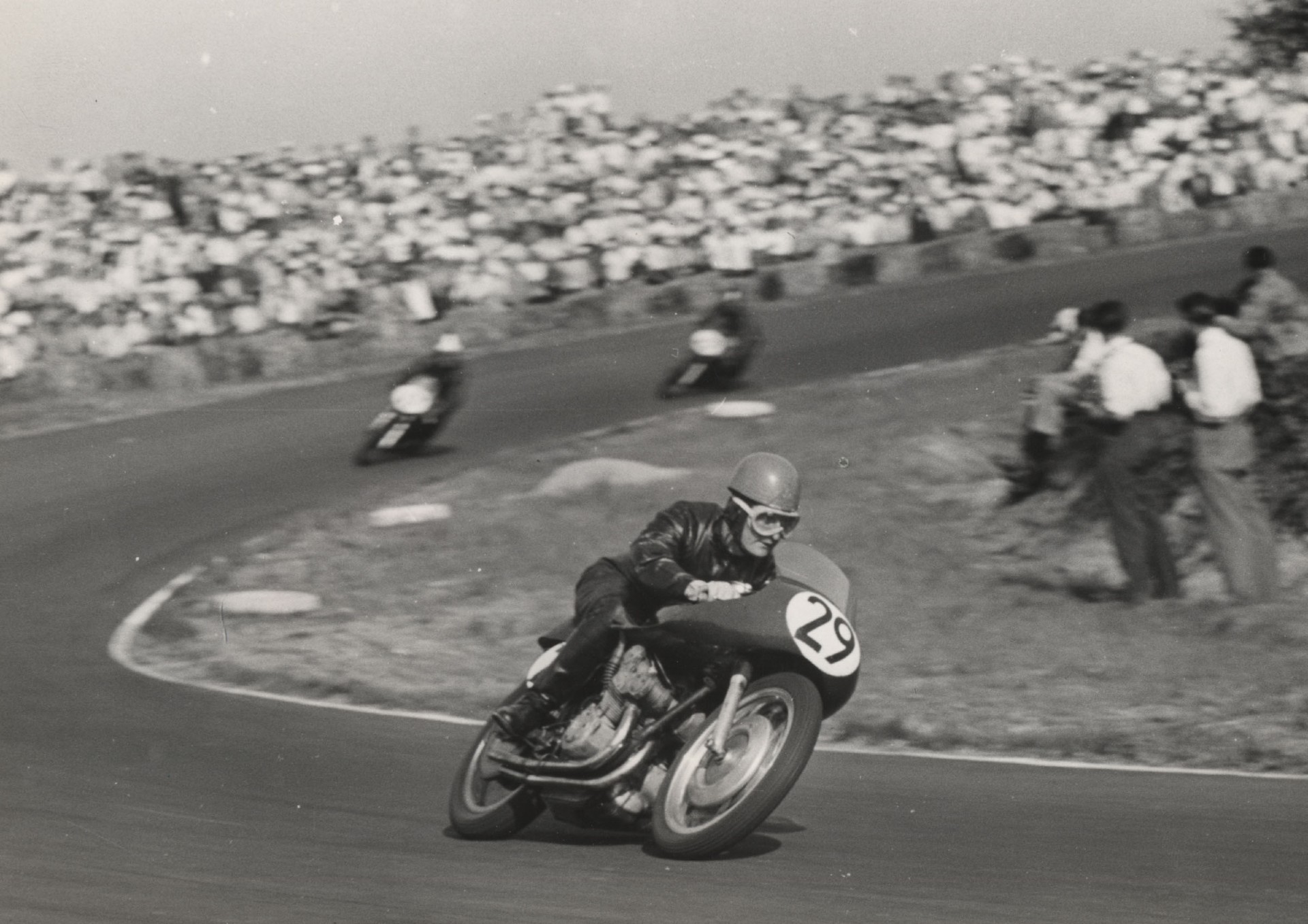 With nylon, more flexible and resistant than cotton, much less layers were necessary in the carcass structure, and therefore the tire was lighter, exerted a lesser gyroscopic effect on the wheel, and the bike was more agile and easier to ride. Therefore, it was more effective on corners, could enter them faster, and behaved better. And when reaching high speed on corners it had to be tilted more to turn it. Nylon also allowed less rubber to be used, so the wheel temperature and also its deformation was reduced, increasing grip and safety.

The next step in the 60s was the use of triangular section tires, which increased the support surface on corners. The rider started to tilt. From the hieratic lines of the classic and orthodox school of the past, where it was difficult to go beyond 45º of inclination, they moved on to going round them with a higher inclination. The toe of the boot was used as a reference when cornering then, and it was common for many riders to finish a race with boots sanded by the asphalt, completely full of holes, and even with their toes sticking out, when they went round them at the limit of the tires' grip. 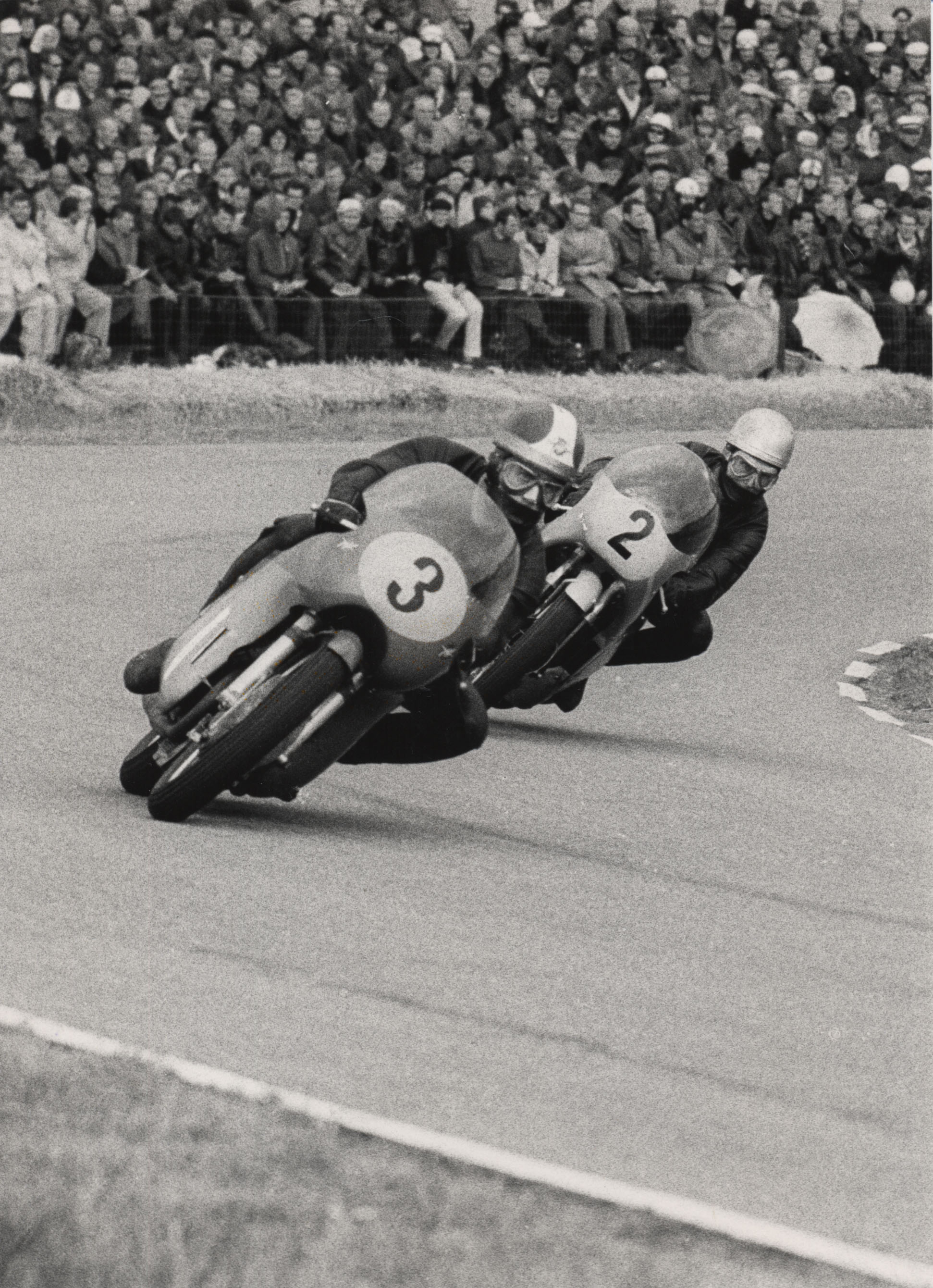 A revolution from the ice: Jarno Saarinen starts to drag his knee

That style of riding stayed for years. But in 1969 a Finish rider appeared on the scene, Jarno Saarinen, who would revolutionize the way of riding a bike. Formed in the races on ice in Finland, where he used to ride taking out his knee and using it as support on corners, Saarinen, who was also an engineer, fought for the title in the 250cc and 350cc categories, managing to win the 250cc championship in 1972, and two 350cc runner ups (1971 and 1972) against the then out of reach pairing of Giacomo Agostini and MV Agusta. 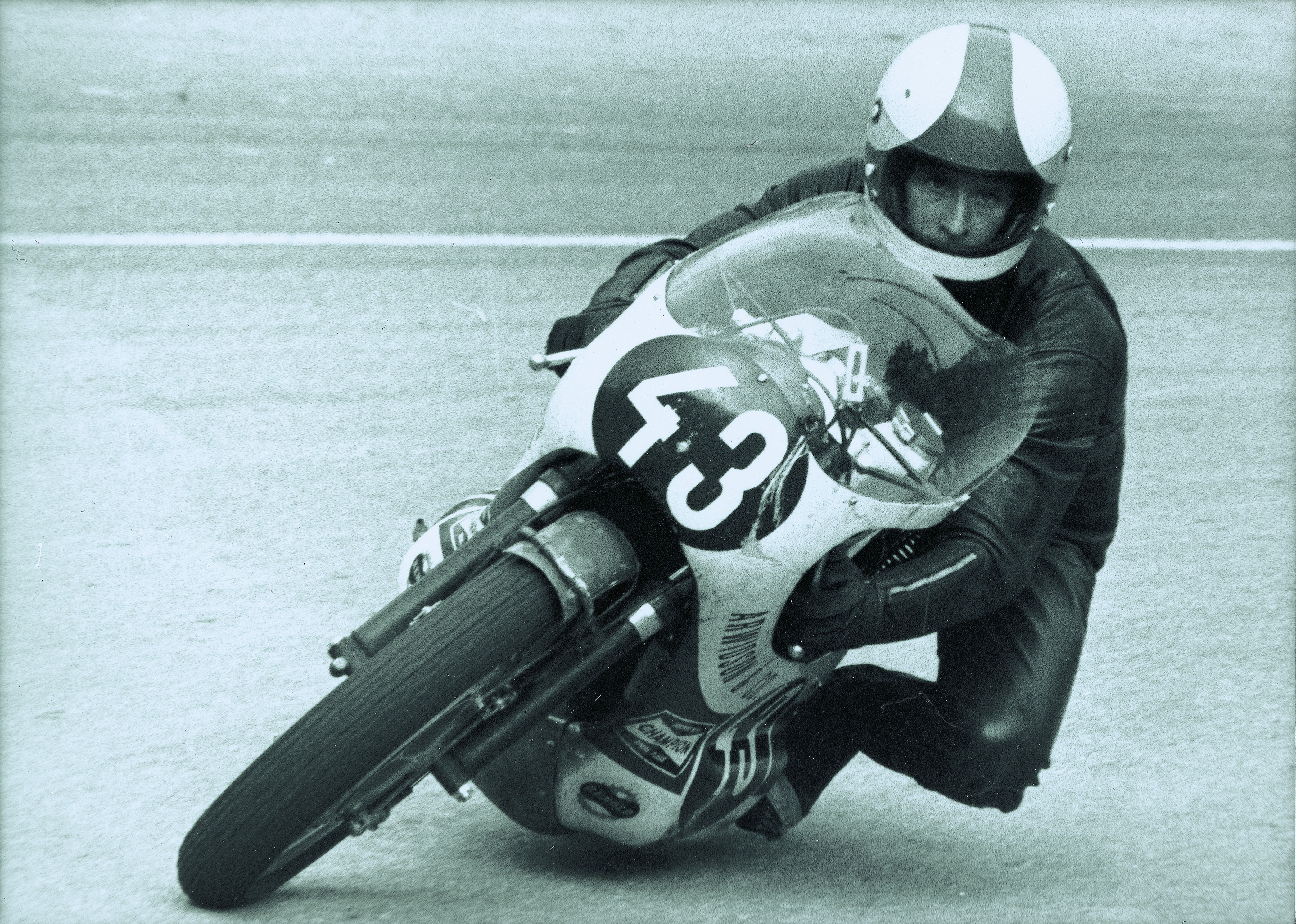 Little by little, Saarinen was defining his way of riding, with his body more and more displaced towards the inside of the turn, with his knee pointing to the ground. He used some very tight clip-on handlebars, practically perpendicular to the ground, because he thought that he should follow the natural position of his hands, and that configuration conditioned his entire posture on the bike. The overalls of the time were not particularly well suited for knee-on-ground riding either, although Saarinen was already using a thick padded knee pad under the outer layer of the overalls to protect him from possible friction with the asphalt. Because although the position and style were already defined, he did not yet drag them regularly on the asphalt. His tragic death at Monza in 1973 prevented his personal style from continuing to evolve.

The popularization of the knee-rubbing style

It was Kenny Roberts who started to introduce this technique in 1978, when he took part in the 500cc World Championship. Roberts had been inspired by Saarinen's style. The American was only a rookie rider in the Lightweight class (250cc) when he saw Saarinen ride in the Daytona 200 in 1973, and was left impressed by his style and the way he used his body on the bike.

He was adapting Saarinen's knee down concept to his riding, combining it with rear wheel driving, skidding, acquired in dirt track races, the dirt ovals, where a good part of the AMA Grand National took place, the North American speed championship, which Roberts would win in 1973 and 1974, before he arrived in Europe. 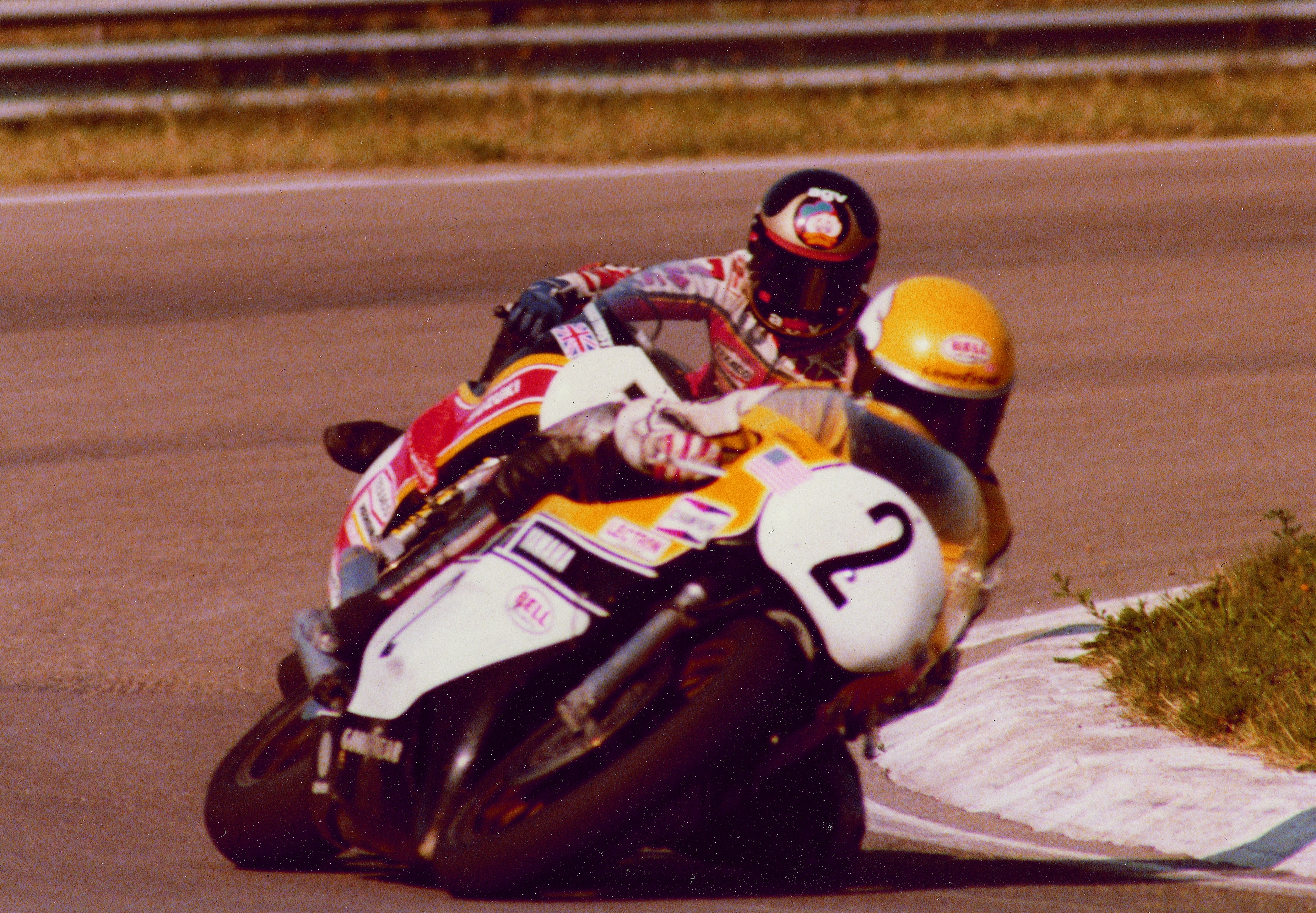 When he finally took part in the World Championship from 1978, Roberts introduced his style, knee on ground, seeking a third support, which forced him to use knee protectors. At first he covered them with duct tape, but it soon became apparent that this was not enough.

The riding also marked changes in the equipment

The use of the knee was so generalized –although there were still riders who used the academic style of rubbing with their toes, such as the Dutchman Wil Hartog, who used boots with reinforced toes, of greater thickness– that manufacturers started to manufacture overalls with special knee reinforcements. First by incorporating studs or plastic composite studs very resistant to abrasion, and from 1981 the use of pressed leather or plastic plates became generalized. They were fitted with Velcro that was stuck to the knee pads so that the rider could slide their knee safely and without the risk of abrasions due to the high temperature generated by the friction.

The advance of the tire technique made inclinations steeper and steeper and knee down riding become a usual technique in any category. With the arrival of radial wheels from 1985, the performances of motorcycles and their effectiveness on turns improved. The style didn’t change much in the following years, but from the arrival of Bridgestone to the MotoGP World championship in 2003, the situation transformed. 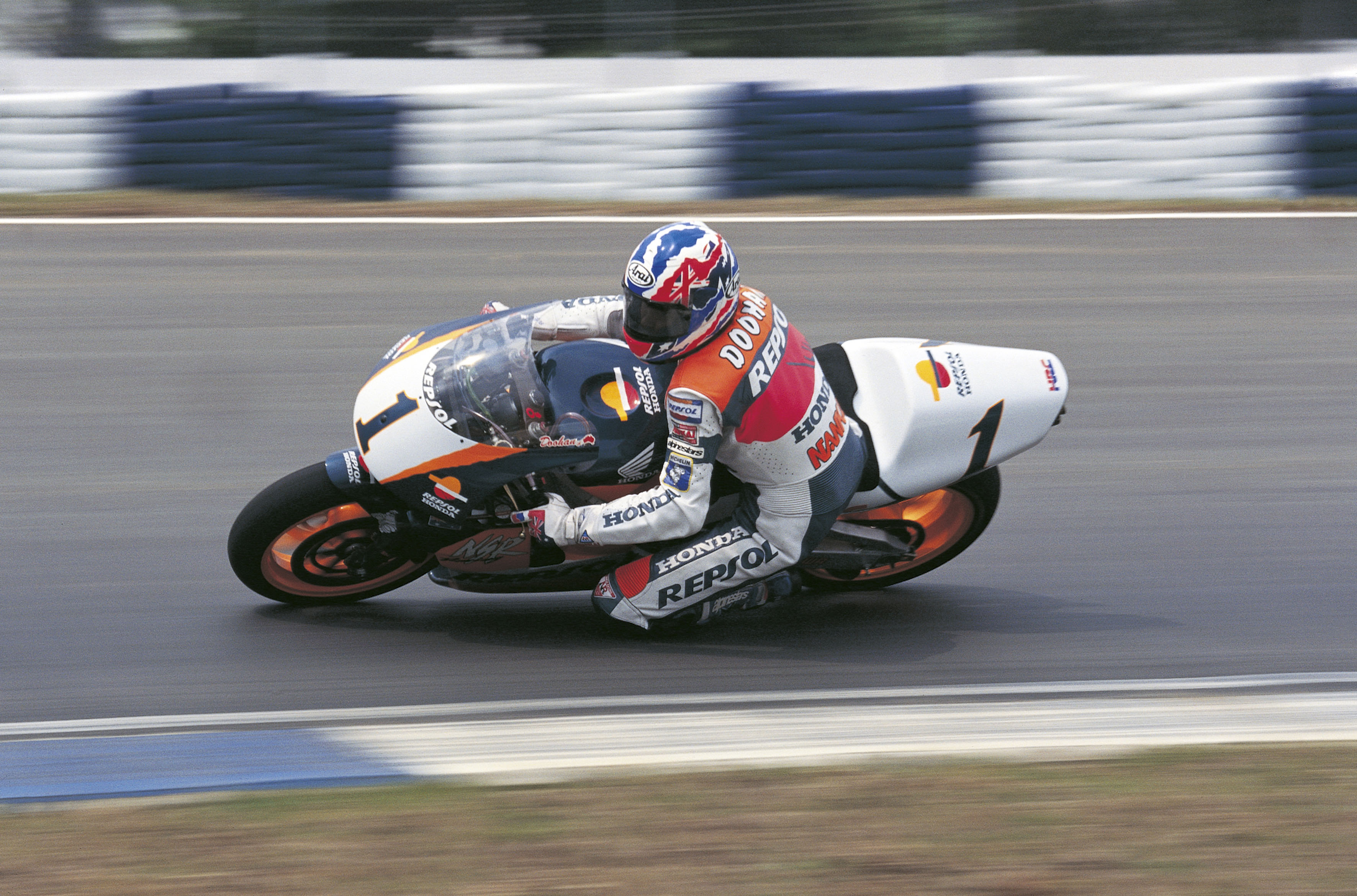 One of the Japanese manufacturer's major differentiators was its exceptional lateral grip, which allowed riders to reach inclination angles unconceivable until then, close to 60º. In order to maintain the line at such an angle, it was necessary for the rider to drop further and further, reaching a point when the knee stopped being a reference to become a support.

The rider then had to look for the reference of the asphalt with a new terminal and that is when they started to use the elbow as a new support point. Marc Márquez became the example of this new riding style, which he had already begun to develop in his Moto2 career. Looking for the best possible grip of the rear tire, Márquez began to lower his body as much as possible, limiting the inclination of the bike, which led him to adopt this unlikely position. Soon all the riders realized its usefulness. When Márquez arrived in MotoGP, the tires offered him much more grip than was available in Moto2, but he kept his style because it was still effective. 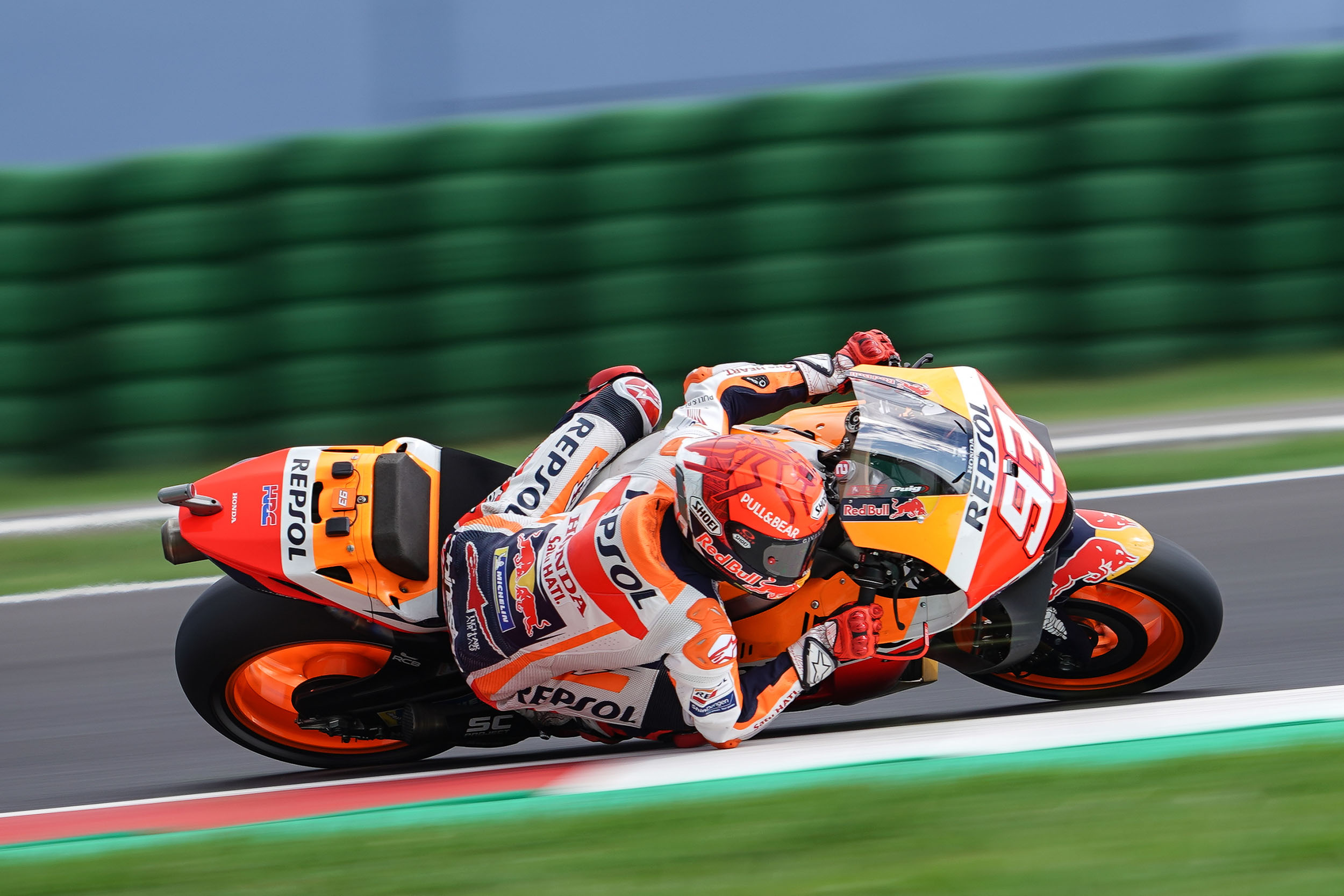 The extraordinary lateral grip of MotoGP tires favored this way of riding, but this style hasn't just been limited to the top category. In Moto2 and Moto3, with Dunlop tires with characteristics quite different from those of MotoGP, this way of driving completely low down, supporting knee and elbow, has been implemented in all categories, in motorcycling in general, even in the basic promotion classes, where the new speed talents are formed. And just like in the 80s, the equipment manufacturers have had to come up with new elbow protectors that allow the elbow to support safely on the asphalt.

This new style leads us to seeing inclinations of more than 60º, but regardless of the style of the rider’s riding, nothing would have been possible without the high level of technical evolution achieved by the motorcycles.