Having Dani Pedrosa is a guarantee for any manufacturer.

The Spaniard, who made his Grand Prix debut in 1993 and experienced the switch from 500cc to MotoGP, spoke about his view of the current season and assessed how the series has changed in recent years.

WHAT IS THE FIRST MEMORY THAT COMES TO MIND WHEN YOU THINK OF THE BARCELONA-CATALUNYA CIRCUIT?

“I have many memories of the track, but without a doubt one memory would be of my first race in the World Championship in 1993, when I rode in 125cc and placed seventh. Of course, it’s impossible to forget the 1996 Grand Prix. It was very special, because it was the first victory I achieved in 500cc. Even today people remind me of that day when I see them in the paddock. I have ridden at Montmeló many times and for me it has always been my home circuit.”

YOU WERE ACTIVE IN THE TIME OF THE 500CC BIKES AND THE SWITCH TO MOTOGP. HOW WAS THAT CHANGE AND WHAT DO YOU THINK OF THE CURRENT MOTOGP BIKES?

“The 500cc machines were bikes that did not have as much technology. You had to be careful with the throttle, although it did not have as much power. Something that people do not usually think about is the tyres, but that difference was really felt when MotoGP arrived. Without a doubt, the biggest change was the arrival of electronics, and since then that has evolved a lot. The MotoGP bike has more power, so it was important to implement good electronics management. In addition, new manufacturers came in, and that made the World Championship grow.”

WHAT RATING WOULD YOU GIVE THE START OF THE CURRENT SEASON?

“The series is very interesting. Obviously, there’s a great difference between Márquez and the rest. Despite his crash at Mugello, Marc is looking very solid and consistent, able to save everything. Right now, I think rivals have been more inconsistent. Now Lorenzo has emerged. His change in the last few races has been amazing. I think Valentino [Rossi] continues to hold on, while Viñales hasn’t quite found his way yet, just like Pedrosa. The Suzuki and the KTM seem to be somewhat far off the pace. The last few years have been interesting and now there are different circuits, so it looks like it will be a nice season.”

YOU HAVE BEEN A HONDA, YAMAHA AND DUCATI RIDER. HOW DO YOU SEE THE THREE MANUFACTURERS TODAY?

“I see the three being more evenly matched than ever. I would dare say that maybe the Ducati is the one that is working the best. The Yamaha seems to have some difficulties, especially at some circuits. The Honda, ridden by Marc Márquez, is making a difference, but in general, the three bikes are quite evenly matched. The Suzuki doesn’t look bad either, although it still lacks some engine power. The KTM is still a very young project and the Aprilia is perhaps the bike that is furthest behind now. I think the new regulations and the change in tyres have helped to even things up, and all the factories are up there. In the end, the difference is a matter of the rider feeling good, and that depends on the circuit and the conditions.” 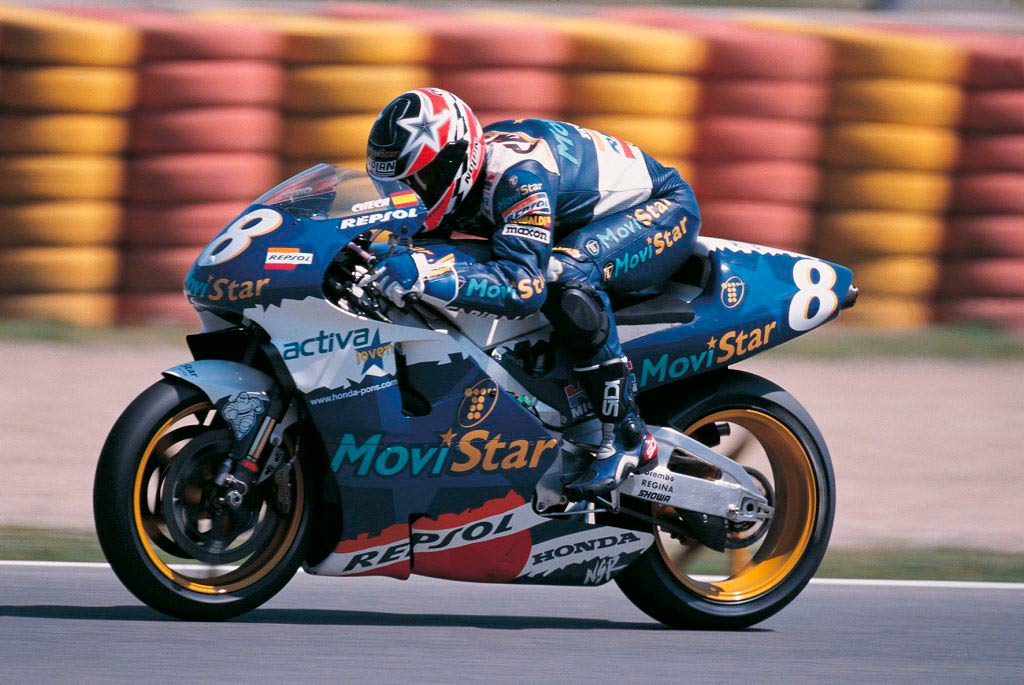 DID YOU EXPECT A SECOND CONSECUTIVE VICTORY FOR LORENZO?

“I thought Lorenzo’s victory would have come last season. That was not the case, and it was a great disappointment for both the factory and for him. It’s too bad that the results have come right at the moment when Ducati have decided not to continue with him. But nobody expected him to do what he did. If he had, Ducati would have trusted in him and waited a little longer -until Brno for example- to be able to decide. I don’t know what will happen from here on. Now the circuits are a little more difficult for both him and his bike, so I’m sure we will see more open races, with more riders aspiring to win.”

HOW DO YOU RATE MÁRQUEZ’S ATTITUDE OF SECURING SECOND PLACE AFTER SEEING THAT HE COULD NOT REACH JORGE?

“Marc [Márquez] is one of the best riders and one of the most skilled at the moment. At Barcelona he still had the mistake from Mugello on his mind, so second place was the smartest and most correct move -since trying to catch Lorenzo, who is currently out of the title fight, would have been a mistake. This gives Marc a degree of maturity superior to that which he had in previous years.”

DANI PEDROSA HAS GONE 16 CONSECUTIVE YEARS WITH AT LEAST 1 VICTORY. WHAT CAN YOU SAY ABOUT THE NUMBERS OF A RIDER YOU COMPETED ALONGSIDE?

“Dani is a great rider, but maybe his physique limits him a bit in this class. He has always been very fast, but injuries have not allowed him to have a complete enough year to obtain a title. Even so, having Dani is a guarantee for any brand, because he will always be at the front and is a great worker. Right now he is doing a great job with Marc, although perhaps having him alongside has left him in the background during the last few years.”

THE NEXT ROUND IS AT ASSEN, A FAST AND TECHNICAL TRACK. WHAT DO YOU THINK WE’LL SEE THERE?

“Anything can happen. We will see what conditions the circuit provides, but in the dry Lorenzo and the Ducati can be very strong. Márquez will also be at the front and the Yamaha works well in Holland; it is a circuit that is good for Valentino [Rossi]. We don’t know what could happen with the rest of the riders that have a chance for victory.”

WHO DO YOU THINK WILL MAKE UP THE TOP THREE AT THE END OF THE SEASON?

“I see Marc [Márquez] being the winner of the MotoGP title this year. Second, if nothing changes, will probably be Valentino Rossi. I have doubts about who to put in third place; Right now,  Lorenzo, although if he continues like he has been, he could even take second.”