Arón Canet, who started from tenth position and Alonso López, who did so from eighteenth, were part of an abundant front group; some 23 riders were part of the pack at the halfway mark, 15 at the end.

Four laps from the end, Canet led the group briefly, but was overtaken on the penultimate lap due to slipstreams and took the chequered flag 0.154 off the race winner, Albert Arenas.

López managed to hold on in the front group and has reached the top spots at the start of the last lap. He finally finished eleventh, half a second off the win. 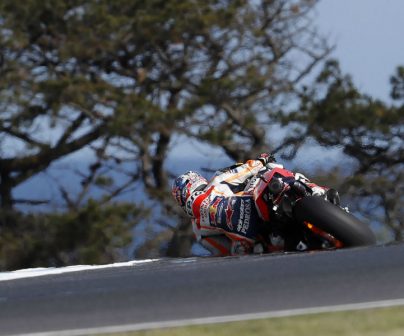 Sixth pole of the season for Márquez in Australia

A step forward It was a lot of fun and we all gave everything from the get-go. This circuit is amazing -and even more so when there are races like that. We have taken a step forward with respect to the last Grands Prix and I hope that we continue this dynamic.

Good feeling. On the last lap everyone at the front held back, because nobody wanted to lead and be overtaken on the slipstream. As I had more inertia out of the last corner, I tried to take advantage of that at the end of the straight. Two riders closed me out on the brakes and I had drop back, but it was a good feeling to be at the front.

Bittersweet feeling. It was a more positive race than we’ve had lately, because we took points after four races without adding to our tally. There was a very large group and it was very tough to manage all the slipstreams. In any case, the result leaves me with a bittersweet feeling, because during the whole weekend I had the pace to fight for the victory. We tried, although we have eventually finished in sixth position. I managed to take the lead at the end and I opened a small gap, but once we got back onto the home straight I was overtaken again.