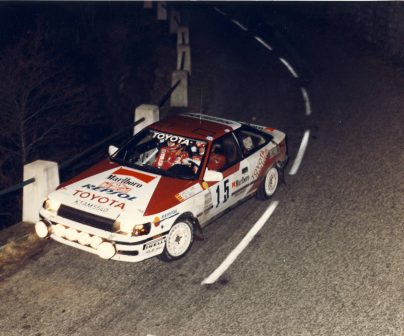 By 1990, Carlos Sainz had already established himself as a driver to be reckoned with in the championship, and his performances had put him at the helm of the Toyota Team, next to his inseparable co-driver Luis Moya.

The other two cars in the team were commanded by Mikael Ericsson, who sat next to Claes Billstam, and the German prodigy Armin Schwarz, next to Klaus Wicha. Expert Bjorn Waldegaard had also driven a vehicle for a test conducted by the team. His team-mates the previous year, Juha Kankkunen and Kenneth Eriksson, had gone over to Lancia and Mitsubishi, respectively, and were now rivals.

The drivers competed in 11 races in what would be the year of Toyota's and Sainz' first victory, with the support of Repsol.

Once again, this would be the stage of the year's first challenge. During the event, the roads were devoid of snow and the Toyota Team members fared extremely well. Everything pointed towards a sure victory by Sainz, who led the race at several stretches and gave the former champions of the asphalt at Monte Carlo a formidable fight.

However, Lancia's performance suddenly improved and its members managed to turn the race around, coming in first, with Carlos, it must be said, coming in a promising second place, 54 seconds behind the winner, Didier Auriol. His team-mates Schwarz and Ericsson would finish in fifth and seventh place, respectively. Though victory had been snatched from the Repsol driver, this was a promising start of the season.

Only Sainz and Schwartz took part in this race. Though Lancia had secured the first three places in the race the previous year, this year's race promised a different result thanks to the improvements made to the Toyota team. The asphalt and gravel mix of the Portuguese tracks proved particularly rough and had its toll on the mechanics. Of the 108 participants, a mere 34 managed to complete the race.

Fortune would not be on the side of the team on this occasion either, as Schwarz abandoned the race at the 10th lap after careering off the track, and Sainz did so as well, near the end, when he noted that, on the 33rd lap, his gearbox could no longer hold it together.

What happened during this competition brought the team hope and inspired them to aim for greatness. Bjorn Waldegaard, an expert in these types of races, was at the helm, rather than Armin Schwarz. The three Toyota team members made it to the Top 5 with an impressive victory by Bjorn, Ericsson coming in third and Sainz in fourth.

Sainz had not been able to compete with his own car, as his participation had not been planned. That said, the Spanish driver raced with the reserve vehicle of his team-mate Waldegaard and secured valuable points for the team in the championship.

Just as had occurred in Monte Carlo, victory was snatched from Sainz' hands because of the good fortune of the Lancia team. He would secure second place, a mere 36 seconds behind Auriol, and this was another taste of victory that would instil the Spanish driver with renewed confidence.

It was during this race that Sainz' possible victory began to be anticipated. After the team's three drivers had abandoned the race in 1989, the Greek contest became the stage where Sainz sealed his first victory at the World Rally Championship. Thanks to formidable driving and the improved performance of the Toyota vehicle, Carlos would come in first place, with a 5-point lead.

With the boost of morale afforded by his triumph, Sainz would again exhibit his skill on the gravel track. Competing as the sole official driver of the Toyota team and without Lancia's official members to compete against, Sainz would secure his second, wide victory, amassing a good many points in the process.

The South American country was seeing the Japanese brand circle its tracks for the first time and would almost see Sainz's victory as well. Unfortunately, a calculation error would make the Celica flip over. Luckily, Carlos was able to continue the race and, because a number of his adversaries also experienced mechanical problems, he was ultimately able to secure second place.

It was at this venue where Sainz' name would be elevated to the rank of legend. Finland's complicated tracks, calling for average speeds of over 100 km/h, saw Carlos Sainz, who had secured a place at the World Championship podium the previous year, simply fly. To the amazement of the local drivers and aficionados, Sainz would secure victory, becoming the first non-Nordic driver to do so in the rally and earning the respect and admiration of all lovers of motor sport.

Though this was the first time Sainz was racing on Australian tracks, this did not prove a handicap for the Spanish driver, who, after 570 kilometres of demanding, dust-covered tracks, would come in second, behind Kankkunen, leaving the door open to securing the much-coveted World Championship Cup at the next race.

Sainz was racing for the Cup at a rally that had always been Lancia territory. The drivers of the Italian team were determined to give it their all. As in the previous year, Carlos drew as much horsepower from the Toyota Celica GT-Four as he possibly could and was finally able to taste victory.

Unfortunately, when he was driving at top speed and was able to broaden his lead over his adversaries, a hitch set him back some places. But thanks to his great driving skills for the remainder of the race, he secured enough lead to earn third place at the podium, a result which was more than enough to win his, and Toyota's, first World Championship.

Having already secured the Cup, Carlos Sainz and Luis Moya could put the pressure on their rivals at the last race of the year, in Great Britain, without much stress. Victory having slipped through their fingers the previous year, on this occasion the driver would put an end to the bad streak and obtain an impressive victory, putting an end to the more than decade-long reign of Nordic drivers at this rally. 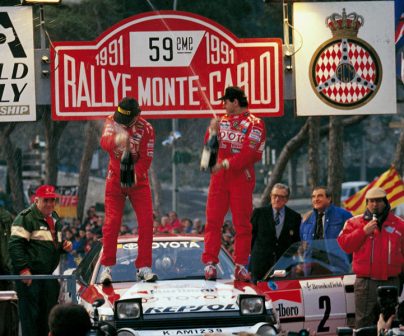