Volume measurement units. They may be American (GAL) or imperial (UK GAL). They are equivalent to 3.78 litres and 4.54 litres respectively. The fuel tank of a MotoGP motorcycle holds up to 5.8 (GAL) or 4 (UK GAL) and 6.7 pints, equivalent to 22 l.

In motorsports, this term is very often used to refer to the throttle, “the rider is putting his foot down”, or "stepping on it coming out of a corner”.

Used in several parts of the engine to provide a watertight seal between parts through which fluids or gases pass, adapting and sealing any type of irregularity in surfaces (e.g., between the cylinder head and the motor block, between the exhaust manifold and the cylinder head, etc.). They can be made of different materials, such as rubber, plastic, metal, and even composite materials. They can be found in different premade shapes, able to be cut to measure, or a liquid for direct application.

This component allows us to change the rotation ratio between the engine output and the wheels, giving us more acceleration or more speed. Depending on the vehicle, they can have a different number of gears and ratios. MotoGP bikes have six different ratios and up to 24 different ratios may be chosen, using a gearbox with seamless technology.

A term to refer to some sports trials, generally in motorsports. In the case of MotoGP, this refers to the competitive period from Friday to race day on Sunday.

It is made up by members of the FIM, Dorna, IRTA International Racing Team Association), and MSMA (Motorcycle Sports Manufacturer Association) and takes care of issuing updates and modifications to the technical and sports regulations.

Warping or tearing of tyre rubber towards the edges due to excess slipping on the asphalt or operating at inappropriate temperatures. When this phenomenon appears, it's usually temporary until the tyre is cleaned by wear on the affected areas.

Term used to refer to a rider getting a pole position, fastest race lap, and victory in a Grand Prix.

One of the places where people sit along tracks, usually along the main straight and other points along the track.

These are the points located before the starting line where riders start the race. Their placement is based on their qualifying times (Q1 and Q2).

This term can refer to the grip of the tyres to the asphalt or the state of the track. It is normal to see riders saying that the track is missing a lot of grip or that they're missing it on a tyre.

Grip can also refer to the handlebar grips, where the rider holds on, one of them being fixed (the left one) and the other one the throttle (the right one) where you accelerate.

Normally a slow and very tight curve shaped like a U or a V.

This refers to when riders hang off their bikes to help them when taking a curve in a certain way. Marc Márquez is well known for hanging off his bike a lot, taking him to very extreme situations.

A fall caused by the rear wheel slipping towards the outside of the curve and suddenly gaining traction, launching the rider the rider up into the air.

This refers to a rider who's been the fastest in the entire grid, leading the MotoGP race from first bend.

This is a unit of power like the one given by an engine. There are different ways of measuring it: hp and cv, the first one being the original in the imperial system equivalent to 0.74 Kw and the second one equivalent to 0.73 Kw in the metric system.

A length measurement unit mainly used in Anglo-Saxon countries though used extensively in certain fields (such as tyre sizes). It is equivalent to 2.54 cm or 0.08feet. For instance, MotoGP tyres measure 17 inches.

The place where air enters the engine, normally made up of the “air box”, the filter, and other components. In MotoGP bikes, this part is located where we would usually find the fuel tank.

International Road Racing Team Association. This is the association that represents the voice of all World Championship teams, which works together with the FIM (International Motorcycling Federation) to ensure appropriate decision making and standards for MotoGP.

This occurs when a rider pulls away while the lights are still red at the start of a race, resulting in a penalty of two long laps.

Temperature measurement units. “Degrees” should not be used as it is an absolute unit where 0 is the lowest theoretical measurement. 1 kelvin is equivalent to -272.15 degrees Celsius. It is mainly used in scientific processes.

The raised edge of the tracks. Also called a Curbstone.

Pressure measurement unit, equivalent to 0.98 Bar, 0.96 Atm, 14.22 PSI, and 735.55 mmHg. This measurement unit can be used to calculate tyre or injection pressure but it is more common to use bars.

The levers on the handlebars that operate the front brake and the clutch.

The bike's lean angle relative to its vertical position. We can often see angles of over 65 º and riders grazing the asphalt with their knees or even their elbows.

A fall generally caused by a loss of grip of the front tyre, making the rider fall off and the bike slide under them. This situation can rarely be salvaged, even though Marc Márquez seems to do it quite often! 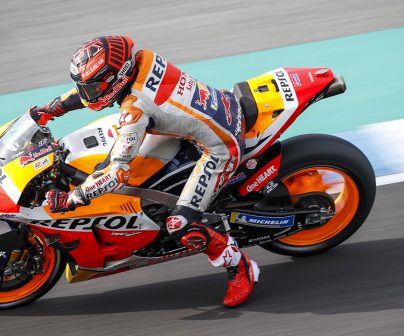 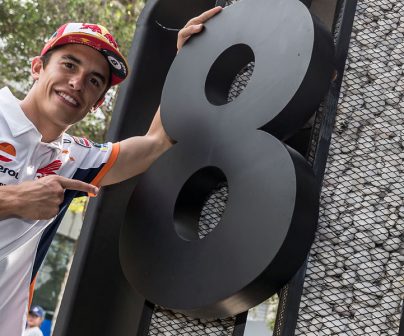