Home / MotoGP / Evolution of the Repsol Honda engine: the RC212V and the RC213V

The development of the RC is an endless journey, always striving to create a more powerful bike with smoother handing

In 2007, a new regulations change limited engine displacement to 800cc, which forced manufacturers to be creative and look for new ways to give their engines the power they needed. Honda decided to return to the V4 layout they knew well from the 500cc era, which let them reduce mass and friction in addition to avoiding regulation penalties for five-cylinder engines. The firing configuration returned to screamer mode to take advantage of the engine's full power, whilst the electronics that weren't available in the NSR era made handling smoother than ever before. As a result of these changes, the RC212V's top speed was 15 kph lower than its predecessor's, but made up for this with faster turn speed. This new machine was better at speeding up when coming out of a turn and allowed the rider to brake later, helping it achieve lap times similar to the 990cc bikes.

In 2008, a new system of pneumatic valves springs was introduced, eliminating the  metal wire springs used to close the valves. The extended the RPM range up to 19 000.

The 2009 season brought with it the change in tyre supplier, from Michelin to Bridgestone; the team's energy was now fully focused on adapting the bike to its new treads. They overcame changes in the chassis the suspension, and others modifications in order to adjust the mechanics to the new tyres. In 2011 the "seamless transmission" was introduced, which let the rider change gears without losing speed, with a lapse of only 0.009 seconds instead of the 0.04 that was required before. This innovation alone allowed for a considerable improvement in lap times without the need to increase engine power, which was left relatively untouched during this period. Casey Stoner won a title as did the bike itself in its last year in competition.

In 2012 regulations changed again, raising maximum displacement from 800cc to 1000cc but limiting engines to 4 cylinders with a maximum diameter of 81mm. These new regulations offered many possibilities and allowed the RC213V to become a reality. The main problem posed by the extra displacement was the increased engine size. The RC212V's 75° angle meant that the bike needed to be higher and affected its weight balance. So, Honda developed a new V4 engine at a 90° angle to get around these difficulties and maintain the ideal mass centralisation by lowering the bike's centre of gravity. This new engine had the ideal balance, letting it work without a balance shaft and thereby gaining a bit of extra power. The lighter crankshaft did not need to rotate in opposite direction of the rotating wheels, and so its rotation direction was changed. As for the firing configuration of the cylinders, it was decided to configure them in screamer mode.

In 2013, this motorbike and Marc Márquez formed a team for the first time, together with Repsol Honda Team. It turned out to be a complicated bike to ride: despite being so finely tuned, it still presented challenges when taken to the limit. Marc Márquez managed to bring out the best in it, however, winning the 2013 and 2014 World Championships.

In 2015, the electrical limits made Honda focus on the engine and look for a more explosive and sharper delivery of power. Naturally, this made steering much more sensitive and required multiple chassis tests. With this motorcycle, Márquez made it up to the third position in the standings.

In 2016, the trend in regulations to limit electronics was consolidated, keeping the team from using the ideal programmes to control the engine. This forced them to discard some of their previous changes — this included the crankshaft, which would need to be replaced by a heavier one that rotated in opposite direction of the rotating wheels to reduce their gyroscopic effect. The result was a bike with a reduced tendency to do wheelies whilst accelerating and with changes in the way it went through curves. Some 9–10 hp were lost in the process, but the way the engine worked helped significantly in heating up the front tyre (supplied by Michelin, who had signed on this year). This advantage was enough for Marc Márquez to be proclaimed World Champion that year: one of the most thrilling seasons, with up to nine different riders winning at least one race.

With an eye to sweetening the power delivery a bit, in 2017 the engine returned to the big bang configuration: in this firing order, all the power strokes occur simultaneously with a lull in power between one stroke and the next. This change increased traction and improved acceleration and handling when entering and coming out of curves. Improvements were also made to the chassis and optimisation of ECU, all of which helped take this motorbike to yet another World Championship title — Marc Márquez's third riding the RC213V.

The development of the RC is an endless journey, always striving to create a more powerful bike with smoother handing capable of delivering optimal performance on the track. Who can know what the coming years hold for the team? In what direction will regulation changes take us? These are the questions that Repsol Honda engineers ask themselves, and their imagination is the cradle of future models to be ridden by the Repsol Honda Team. 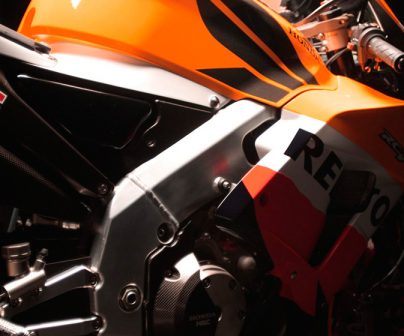 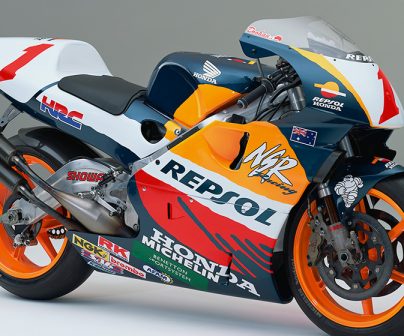