In 1969, Seat put the 1430, a model manufactured in Barcelona, on the market. This was a version of the Fiat 124 especially created for the domestic market. It had aesthetic tweaks, such as the front with 4 headlamps, and used several different drives.

In the sedan or family version, this vehicle had a 4-cylinder 1592cc carburetted engine, twin camshaft with 8 valves, and 95 CV. With a weight of around one ton, the Seat 1430 had rear-wheel drive, four speeds, and disk brakes on all four wheels.

The model was a huge success in its day, receiving the car of the year award as well as commercial success. The racing version that was painted with Repsol colours was prepared by Manual Juncosa, who competed with a Seat 124 Sport Coupé 1600. The latter model began to pale in comparison to its rivals, the Alpine and Simca.

At the end of 1971, Juncosa made the leap to the Seat 1430 1600. The racing modifications included a new 1608cc engine that increased power up to more than 145 CV, reaching 158 CV with the improvements made in 1972. This was done by increasing the displacement to 1689cc and assembling new Weber carburettors. The weight of the vehicle dropped to 900 kg and it got new suspension. It also got a 5-speed gearbox and lock-up clutch.

With this model, Juncosa was able to win many rallies and got great results. It even surprised Fiat technicians for its efficient set up.

In 1965, Renault began manufacturing the R8 in Spain. It was a four-door vehicle that had come out in France a few years earlier as a replacement for the Dauphine model. It had a “rear-engine” design, where its basic version had a four-cylinder 956cc engine and a three-speed gearbox. This combination barely had a horsepower of 48 CV, which was sufficient for its weight of only 750 kg.

The model was a commercial success and several versions were sold with better engines and specifications. It was the perfect car for all uses, with certain racing details, but also ideal for families. It was the first car sold in Spain with disk brakes, although only on the front axis, as the back axis had a set of drum brakes.

The TS model came out in 1968, with its characteristic four headlamps and its 1108cc engine, which got close to 60 CV. The gearbox on this car had four speeds, making it a sportier model that became a strong staple on the Spanish market. The Spanish Motorsport Federation decided to create a competition to promote this vehicle, which led to the Copa TS.

In 1969, the classic R shined on many of the cars in this race and drivers like Salvador Cañellas and Emilio Rodríguez Zapico saw great results driving the Renault 8 TS. This car was also used in Rally races and Repsol had a few Gordini models with 1300cc engines reaching 100 CV.

The 911 S for “super” or “sport” was the first model to incorporate the characteristic 5-spoke Fuchs rims. The C series 2.2 model had a 6-cylinder boxer engine with 2195cc, air cooling, and dry sump lubrication located at the rear of the vehicle. The car had a single camshaft per bank and power of 180 CV at 6500 rpm. The brakes had ventilated disks on both axes, and it weighed about 1020 kg.

This car cost half a million pesetas at the time, which did not include the other half million-peseta investment required to get it ready to race. These adjustments consisted of modifications to the suspension, dual ignition for the engine, a special 100 l gas tank, and other mechanical improvements. Safety improvements were also made including racing seat belts and seats.

This sports car won wherever it went and the ones with the Repsol logo performed well every year they were raced. More than 25 victories and many more podiums are proof of this. These victories include Rally 2000 Virajes, Rally Oviedo, and Rally Vasco-Navarro.

Of the 70 drivers behind the wheel of this legendary car, Alberto Ruiz Jiménez became the absolute champion of the Spanish Rally championship. It was also driven by Jose Manuel Lencina and Eladio Doncel with great success.

This car continues to be a benchmark and object of desire for all motorsport enthusiasts, as it marked the beginning of an era with Repsol. 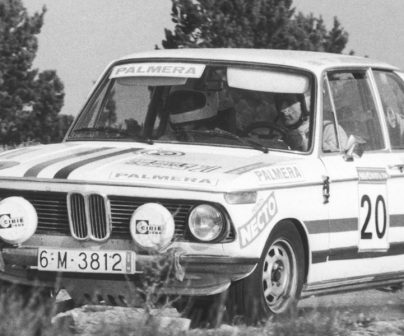